‘Sensing’ the Holidays at Bloomingdale’s 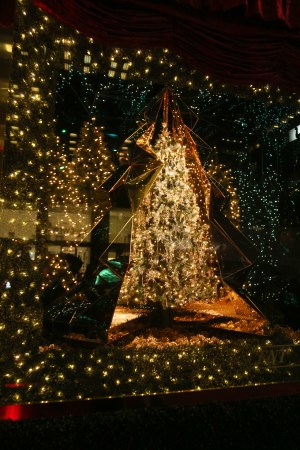 The celebration surrounding Bloomingdale’s holiday window unveiling on Wednesday evening seemed slightly surreal, with temperatures hovering near 60 degrees. The irony of wintry themes such as snowmen and Santa in the windows and onlookers coatless or even wearing sandals was not lost on Bloomingdale’s chairman and chief executive officer Tony Spring.

“It’s an unusual [holiday season] due to the weather staying warmer longer,” he said, “and with the international news, it feels like the holiday will start later. It will come. Black Friday will come and Christmas will come. I feel really good about what our team has done for him, for her, for kids.”

During a performance at Beacon Court on East 59th Street prior to the big window reveal, Grammy nominee Sara Bareilles sang several numbers from the upcoming musical “Waitress,” for which she wrote the music and lyrics. Wearing a white sweater and long black coat that was completely unbuttoned, Bareilles sang, “This is my winter song to you. The storm is coming soon….I still believe in summer days. The seasons always change.”

Back on Lexington Avenue, members of the Patriot Brass Ensemble, wearing red-and-white toy soldier’s uniforms, played Christmas music that was heavy on the percussion.

When it was time to lift the red brocade curtains on the holiday windows, women dressed as old-fashioned bellboys in black jackets and short shorts, pulled gold cords.

Florist Jeff Leatham, artistic director of the Four Seasons George V Hotel in Paris, created sculptures of polar bears and snowmen using faceted pieces of Plexi-mirror and other shiny materials. Gold deer in one window were made from thousands of gold ornaments. Leatham used more than 80,000 rose heads to cover the walls and ceilings of the windows. (Insider’s tip: They’re not real flowers, they’re silk. Real ones would have required too much maintenance.)

The five senses is the theme of the windows and an element of smell, taste, sight, touch and sound is incorporated into each scene. For taste, a dispenser in front of the window featuring a gleaming red polar bear on a mountain of red and white peppermint candies offers passersby a sweet wrapped treat. Holiday music is piped to the street and a window with snowmen contains an interactive experience.

“I created a fragrance for Bloomingdale’s especially for this event,” said Leatham of the pine-y scent wafting to the sidewalk. Inside Bloomingdale’s, a Leatham pop-up shop on the third-floor features his candle collection and new book, “Jeff Leatham: Visionary Floral Art and Design” (Rizzoli).

“These are the first windows I’ve designed,” said Leatham, who’s done floral arrangements for Eva Longoria and Chelsea Clinton. “I remember as a kid coming to Bloomingdale’s and looking at the windows.” Jane Krakowksi showed up “to support Jeffrey,” she said, adding, “these are the most glamorous windows you’ll find anywhere.”

Spring tried to put a positive spin on the holiday season, saying, “We have fun electronics. We’re selling drones. There’s still great selling on cashmere and coats of the season such as Canada Goose and Moncler.”

The promotional posture of the industry seems to be escalating with some retailers breaking out their Black Friday deals as early as Nov. 25, the day before Thanksgiving. More stores are opening on Thanksgiving Day or earlier in the day this year.

“Every year is highly promotional,” Spring said. “We’re in for it again. Based on the weather, people will judge accordingly.”