Bloomingdale’s Keeps the Focus on Fun 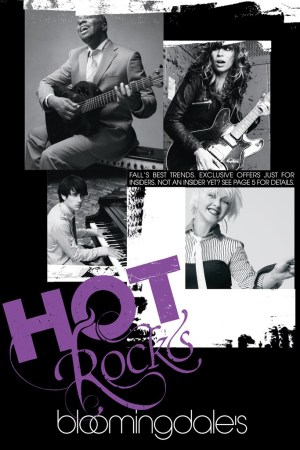 Frank Berman, senior vice president of marketing at Bloomingdale’s, is obsessed with fun.

“I think when you walk into the 59th Street store, you really feel the energy, you feel the beat of it, the demonstrations that are happening in cosmetics and makeovers, designer appearances, trunk shows, DJs, different parties and philanthropic events where we support the communities in which we do business,” said Berman, a 20-year veteran of Bloomingdale’s.

Starting out in the housewares department and working his way through gourmet food, candy, cookware and cutlery, Berman got his first taste of marketing on the ground floor, bringing in celebrity chefs for cooking demonstrations, and partnering with restaurants such as Le Bernardin and Park Avenue Cafe. As he gained more exposure to the various departments, he learned firsthand how to create animation and bring the selling floor to life.

Back in the Seventies, when Bloomingdale’s was at the height of its country promotions, marketing themes were focused on bringing international travel, which was becoming increasingly popular, to its customer base. Today, the emphasis has shifted to pop culture, Hollywood, celebrities, the art scene and cause-related marketing.

“You have to constantly innovate. While those country promotions were very important in helping to build that DNA, that ‘retail as theater’ component that is uniquely Bloomingdale’s, everything runs its course over time,” he said.

“We want our customer to experience what’s happening in pop culture right on our selling floor and engage them in things that are new and ‘of the moment,’ whether that’s with technology or things we’ve done with augmented reality or different applications on mobile devices, to the basics of bringing in the stars of a new movie that’s coming out,” said Berman.

Through the years, Bloomingdale’s has had successful tie-ins with movies including “Evita,” “Phantom of the Opera” and “Moulin Rouge.” For “Moulin Rouge,” the store brought in 20 cancan dancers, Nicole Kidman took the stage to unveil the “Moulin Rouge”-inspired windows, and the store created a boutique selling different products that were curated in the “Moulin Rouge” spirit.

“We sent 30,000 of our customers to the movies as part of this campaign. We worked with up-and-coming film producers and helped with five different independent films and showed them on bloomingdales.com, in our stores in movie lounges, as well as produced DVDs that were sent out to our best customers,” said Berman.

Like most of its marketing campaigns, “Lights, Camera, Fashion” comprised in-store decor, printed materials, catalogues, taxi toppers, newspapers and outdoor advertising, as well as the Web site, which he said is such as integral part of the store’s marketing strategy. “Beyond the commerce it provides, the eyes of the world can see Bloomingdale’s, and what it stands for from their home, mobile device and wherever they might be.”

Other successful marketing campaigns in recent years have focused on contemporary artists (“Artrageous”); the “Pink Campaign,” which raised awareness and money for the Breast Cancer Research Foundation, and “Fashion Rocks,” celebrating the fashion-music connection. “Fashion Rocks,” the longest-running campaign in Bloomingdale’s history, racked up more than 840 catalog pages, 800 newspaper and magazine impressions, 650 in-store events, signage and e-mail blasts. The campaign was anchored with a partnership with Sony Music Group, which included more than 70 performances in Bloomingdale’s stores nationwide.
What has changed over the years is that there are so many different ways to reach customers now, which can be both a positive and a challenge in such a fragmented market. The fact that consumers have so many choices today makes creating unique experiences to differentiate Bloomingdale’s that much more critical.

“It’s not about those static mediums anymore presenting our point of view on fashion. It’s being able to share it through these digital mediums and allowing customers to interact with it, [like] through Facebook, and allowing people to vote on what they like the best, and giving their opinions about things, and getting feedback from them about what’s important to them,” he said.

These days, there’s a two-way communications stream, where it used to be Bloomingdale’s just talking about what it thought was important and what and when people should buy, he said.

“The customer has more information than she’s ever had before,” he added. “In many cases, she might know more than we do, and so it’s really important that we glean some of the intelligence from her in terms of what she wants, when she wants it, in the ways that she wants it.”