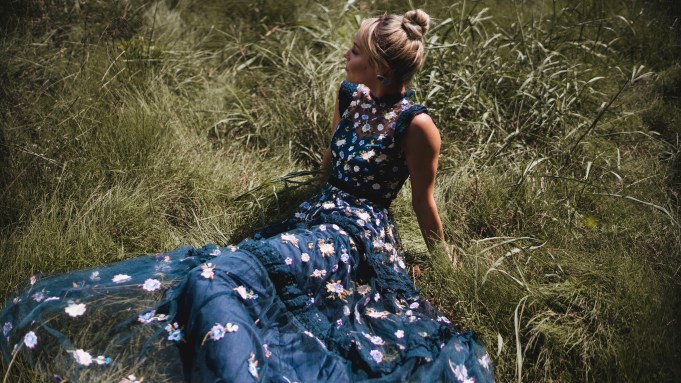 Nordstrom may have Something Navy, but Bloomingdale’s has Happily Grey.

Lawless Lee, who is based in Nashville, started her blog as a hobby six years ago, and it has grown into a profitable business. Today, she has 1.3 million social media followers. Her Instagram account has 919,000 followers and she operates a web site and blog, which gets about 130,000 unique views monthly.

Bloomingdale’s approached Lawless Lee to do the capsule, which is the first time she’s designed a fashion line.

“I’ve worked with them [Bloomingdale’s] in the past, this was honestly perfect timing,” Lawless Lee said in an interview Wednesday. “They’re focused on doing more design projects, and the stars just aligned. It’s been a big conversation piece on my team’s side, and I really wanted to get more on the design side.” She said she was excited to do a holiday collection and hopes it will continue. “We’ve been so focused on this collection, and seeing through all the parts,” she said.

Liz Jones, Bloomingdale’s group vice president, explained what attracted the retailer to Happily Grey. “We spent a lot of time researching style influencers and created lists of influencers’ style we admired. Mary’s really stood out and we knew she would resonate with the Aqua customer. She has an amazing eye for creating chic and interesting looks by mixing, color, texture and pattern. Her style is very refined with an element of fun.” Jones said the collaboration is for one season.

It’s the first time that Bloomingdale’s has partnered with an influencer.

Lawless Lee said that from the beginning, the collaboration has been really hands-on. “I wanted to have a voice and we had three or four design meetings where I was in New York with the design team,” Lawless Lee said. She brought in mood boards and vintage fabrics she has collected.

Born in Shreveport, La., Lawless Lee grew up in Marshall, Tex., before attending University of Texas/Austin, where she studied critical care nursing. For five years, she worked in the cardiovascular ICU of Texas Medical Center in Houston and during that time launched her blog with a focus on street and lifestyle. Lawless Lee said the name, Happily Grey, came from the fact that she grew up in a small town in Texas with conservative parents, “and the world was very small.” When she studied at UT Austin, “the world started opening up for me, and I found it wasn’t so black and white, and it’s actually very gray. The gray space was where I felt the most creative,” she said.

“Living in a hospital and working in such an intense environment and stressful, Happily Grey was that creative outlet that was missing for me,” she said. She pursued both careers simultaneously for three years and moved to Nashville for a job at Vanderbilt Medical Center in their ICU where she worked for a year and gradually quit. “Once I quit nursing, I was able to monetize Happily Grey,” she said.

Lawless Lee described her aesthetic as being “in the moment and that’s how people are really able to connect to me.

“My style is approachable, it’s men’s wear inspired and it’s also very feminine. It’s a reflection of where I’m at that day, and my mood and where I’m feeling creatively,” she added.

She said companies are sending her clothes all the time. “There is a lot of product. I’m thankful, and that’s the number-one job of an influencer to feature clothes,” she said. Elevated street style with vintage-inspired statement pieces is Lawless Lee’s aesthetic. On her site, she features a mixture of high and low. “Being from the South and starting happily Grey in Austin, it’s always been attainable. Now it’s grown, we mix in higher-end designers, but I love the idea of always being attainable. There’s also a lot of vintage. I want it to always feel inspired.”

She frequently features some of her grandmother’s old pieces. She’ll hold onto the clothing she loves, but she’ll have Happily Grey Closet Sales in Nashville to sell off the designer clothes, accessories and shoes. Among the brands she works with consistently are Net-a-porter, Coach and Michael Kors, and she’s also working with skin-care brand NeoStrata. Happily Grey’s demographic is typically a 23- to 30-year-old woman. Lawless Lee said she will promote the Happily Grey x Aqua capsule on her web site and Instagram and will openly disclose that she is partnering with Bloomingdale’s.

“For me, holiday dressing has always been an opportunity to put trends aside and have a little fun thinking outside the box,” she said. “Eccentric, electric and a nod to the styles of the past, this collection is everything that was missing in my holiday wardrobe.”

Lee will make an appearance at Bloomingdale’s 59th Street flagship on Nov. 7. The collection, which will be housed in the newly renovated Aqua shop on the flagship’s second floor, will be available at all Bloomingdale’s stores and online starting Nov. 8.