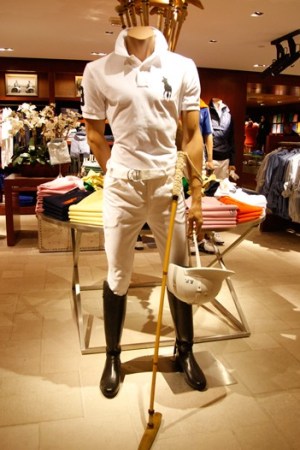 The retailer has unveiled a sprawling 7,000-square-foot shop on its lower level that showcases the flagship Polo collection as well as the high-end Black Label line.

The first week in June, an entrance to the street will be completed, allowing customers to enter directly into the shop. There will be floor-to-ceiling windows beneath a stainless steel canopy cantilevered over the sidewalk.

“It’s really phenomenal,” said Michael Gould, chief executive officer of Bloomingdale’s. Although the new shop is the same size as the old one, it appears to be much larger. “It goes to show what fixturing, lighting, new flooring and ceilings will do,” he said. Gould noted the retailer leveled the floor — the 59th Street flagship was cobbled together from a series of townhouses resulting in its unusual up-and-down configuration — and created three aisles. “It gives the impression that the shop is bigger.”

Gould said there is actually one-third less merchandise on the floor. “You see classifications like belts and socks that were buried before. And there’s an excitement about it. It’s a spectacular shop and gives the brand a great new home,” he said.

The shop is patterned after the new Ralph Lauren flagship at Luxury Village in Moscow. It incorporates white lacquer, stained cherry with burnished woven leather panel inserts, ebonized mahogany and brushed stainless steel trim. The floors are a distressed French limestone laid in a random pattern, and the ceiling consists of white and teak floating planes. Recessed lighting is used throughout and black projector lights highlight specific visual elements.

“We really tried to do something unique,” said Joy Herfel, president of Polo Menswear. “We gave a lot of consideration to the retail environment and how to best showcase the Ralph Lauren brand in their store.”

The shop is segmented between a more casual sportswear offering with iconic Polo items and luxury sportswear and clothing rooms. Like Gould, Herfel pointed to the “complement of accessories,” calling it “impactful. We’ve never been that aggressive with this merchandise at Bloomingdale’s before.”

Herfel said the new shop on the lower level, coupled with a new haberdashery boutique on the main floor, is expected to further boost sales for the brand at Bloomingdale’s. “We’re sure we will achieve great success with it,” she said.