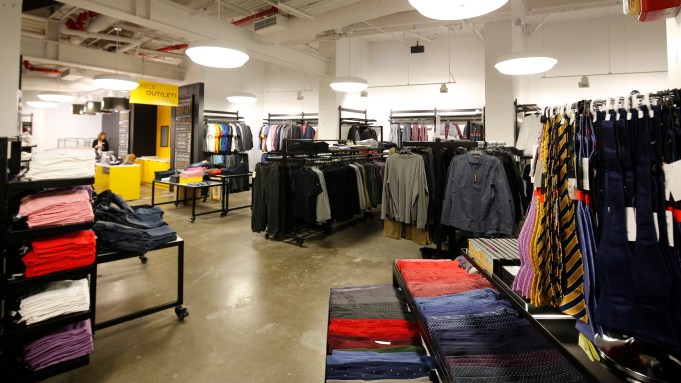 NEW YORK — Bloomingdale’s is upping its stake in the fast-growing off-price arena by opening its highest-profile, most fashion-forward outlet to date on the Upper West Side here Saturday.

The three-level, 25,000-square-foot unit, situated on the northwest corner of Broadway and 72nd Street, is filled with such labels as French Connection, Calvin Klein, Hugo Boss, Michael Kors, John Varvatos, Converse, Tory Burch and Halston, whether it’s in women’s or men’s wear, shoes or accessories. For the first time, cosmetics will be part of the Bloomingdale’s outlet assortment, and children’s is also included.

There are also Cole Haan high heels and wedge shoes for $159.99, reduced from $248, and Frye boots at $199.99, originally priced $348. Other shoe labels on the racks are Ugg, Guess, Isotoner and Coach, while sportswear and outerwear labels included Bagatelle, Moschino Cheap & Chic, BCBGeneration, Coach and Calvin Klein. Among the handbags were styles from Cole Haan, Tory Burch, Halston, She + Lo, and Ivanka Trump.

While Nordstrom Rack and Saks Off 5th are aggressively expanding their off-price chains, Bloomingdale’s chairman and chief executive officer Tony Spring insists his company won’t get into a battle for real estate.

“We are not in a race to get to 50 or 100 outlets. We are in a race to get the best locations in the country,” Spring told WWD. “If there is a great location in Orlando, we would love to get it. If there is a location at Woodbury Common, we would love to get it.” He also cited Michigan Avenue and State Street in Chicago as among the desired locations.

“I don’t think this is about quantity of locations. It’s about the quality of the stores, and capturing a young contemporary customer,” Spring said.

Hudson’s Bay Co. is accelerating the expansion of its 90-unit Saks Off 5th chain with plans to open 15 to 20 units a year in the U.S., and up to 25 Off 5th locations in Canada. Units in Europe are seen as well.

Nordstrom sees the Rack growing to at least 300 units by 2020, from 194 currently, and Macy’s plans to open up to 50 Macy’s Backstage off-price stores over the next two years. Macy’s Backstage was just launched last summer.

Meanwhile, Spring said he sees Bloomingdale’s maintaining its pace of outlet openings of about three to four stores a year for the foreseeable future. Bloomingdale’s launched into the outlet business in 2010 and currently operates 13 units, officially called Bloomingdale’s, The Outlet Store. The Upper West Side will be the 14th location; a 15th unit opens Sunday at Westfield Mission Valley in San Diego, Calif., and a 16th unit will open Dec. 11 at The Shops at Liberty Place in Center City, Philadelphia.

The West Side of Manhattan has long been on Bloomingdale’s radar, though not necessarily for an outlet. “There is great energy and excitement and young families on the West Side,” Spring said.  “We always wanted to have a presence for Bloomingdale’s on the West Side, after we opened in SoHo,” in 2006. “We looked for space for a small contemporary store but just couldn’t find the right situation.”

Tailoring is offered at the West Side outlet, which is unusual for off-pricers.

“The edit is a little more contemporary, a little more fashion forward though still appropriate for the target customer, which is value conscious and fashion conscious,” Spring said, describing the West Side outlet. “It’s a very targeted, very edited, very fashion and value-focused store. This customer is looking to run in and run out, and get a great deal.”

Spring added that the offering will constantly change via multiple delivers each week. “We will have trucks running to that store five to seven days a week.”

The merchandise is mostly ticketed at 50 to 75 percent off the original retail price, though the range is from 25 to 75 percent. Items are clearly marked with the original and the selling price. Of the assortment, 60 to 70 percent of the merchandise comprises goods obtained through opportunistic buys from vendors; 20 percent is clearance from Bloomingdale’s regular stores, and 10 to 20 percent is manufactured specifically for the outlets.

Asked why outlets are hot, Spring replied they’ve always been of keen interest to consumers, but he explained that the online world has made comparison pricing easier and more transparent, that’s there’s an excess of available product, and that Millennials are learning more and more about brands and what celebrities are wearing, all contributing to the increased desirability of shopping off-price.

Earlier this week, Hudson’s Bay Co. revealed that a Saks Off 5th unit will open on 57th Street near Lexington Avenue where Daffy’s once had a store. That’s just seven blocks north from the Saks Fifth Avenue flagship — and two blocks away from the Bloomingdale’s flagship.

Asked if Bloomingdale’s would ever open an outlet so close to a regular Bloomingdale’s store, Spring said, “I wouldn’t rule it out. But for us in New York City, when we have the opportunity to add volume in a neighborhood where we don’t have a presence, it’s more appealing.”

There’s some thought that a proliferating outlet business can be detrimental to the image of the mother brand, because of the emphasis on price and reduced emphasis on service and ambience.

“There probably is a point much further in the future where if outlets became a primary focus of the business, I might be concerned. But in the case of Bloomingdale’s, the outlet business is still accretive, still in its infancy, and still in a healthy stage that complements the overall business,” Spring said.

“I’m not in a door count race,” Spring emphasized. “Bloomingdale’s still has an opportunity to grow across the country in all channels of its business.”