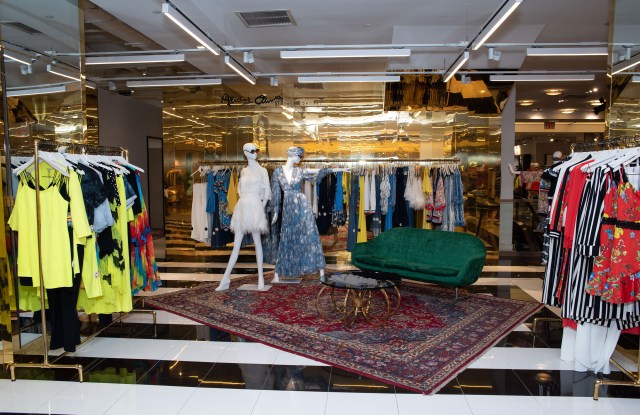 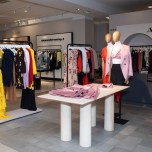 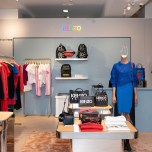 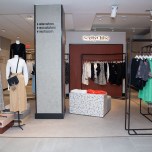 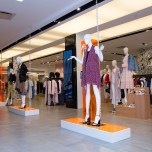 NEW YORK — “I like a store that knows who they are,” said Denise Magid, Bloomingdale’s executive vice president and general merchandise manager for ready-to-wear, bloomingdales.com and concessions.

“What’s always struck me about Bloomingdale’s is that when you walk in, right away you feel the energy. There’s such a pulse. It inspires you to shop.”

Now the beat is picking up on 59th Street, where Bloomingdale’s has just completed a transformation of its rtw business, which is housed on levels two, three and four. Eighty-five labels new to the presentation and a concentrated “avenue” of advanced contemporary collections have been introduced. Also new to the program:

• “Brand agnostic” stylists who help customers navigate the floors and provide tips on styling and collections, in addition to personal shoppers for private consultations and even house calls.

• The “Vacation Shop” that sells lightweight, colorful print dresses, cover-ups, flip-flops and other products for a getaway.

• The Studio 59 “content hub” and The Bar at Studio 59 cocktail lounge, both of which open in April.

• A sprinkling of beauty outposts on two and three from Charlotte Tilbury, Tom Ford and Glowhaus and a Clarins spa for some pampering, a break from the fashion merchandising, and to promote some impulse purchasing.

The second and third floors — 51,000 and 46,500 square feet, respectively — house contemporary and advanced contemporary collections anchored by shop-in-shops from Alice + Olivia, Frame and Theory, as well as “cutting-edge” labels such as A.L.C., Kenzo, Alexis, Rag & Bone Collection and See by Chloé that are new to the store. Among new contemporary lines are Marella, Pinko, Eleven March 11, Paper London and Bec & Bridge.

There are also shops for Derek Lam 10 Crosby, Iro, T by Alexander Wang and Helmut Lang. And several European contemporary collections previously on two have moved to three, including All Saints, Sandro, Maje, Ted Baker, Reiss, Zadig & Voltaire and The Kooples.

The shops are generally around 400 square feet each, though Theory, which addresses wear-to-work the most, and James Perse, known for sophisticated casual designs, have the two largest shops, at about 1,800 square feet each. Most designers have individual shops, and aren’t walled off so one flows easily to the next.

“We’ve created many new shop-in-shops that allow the voice of the brands to be heard within the Bloomingdale’s landscape,” said Magid, while giving a tour of the renovated rtw floors.

On two, there’s an expanded denim department with a Levi’s customization shop as well as shops for L’Agence and Mother, both new to the store. The Aqua private label, also on two, has evolved into a head-to-toe offering and has limited-edition capsule collections coordinated with influencers, such as Happily Grey and Helen Owen.

A bleacher-style staircase up to the third floor helps integrate the floors and encourages customers to extend their shopping journey. You can sit on the bleachers, rest and recharge your phone.

Overall, there’s a better balance of affordable and aspirational collections, and a brighter spotlight on Bloomingdale’s signature approach to merchandising playful, often edgy styles across a spectrum of prices. “We’re known to take a contemporary, very fun point of view,” Magid observed, as she showed off a Libertine statement jacket embellished with safety pins and priced $3,975. “This is art. This is what inspires us. It’s for a woman who wants to be noticed.”

Amid the widened aisles and spacious landings on the redesigned floors, Magid indicated the “army” of mannequins that advocate trends and mix-and-match outfitting — an Alice + Olivia top paired with a Sjyp skirt and Marc Jacobs handbag, for example. Or an Alice + Olivia embellished jacket with a Frame leopard-print denim jean and Tara Zadeh handbag. Bloomingdale’s does push the envelop with mannequins — there are 200 of them on the three floors, many situated atop neon-lit platforms and near monitors playing fashion shows and advertisements. It’s all in sync with the retailer’s “Mix Masters” spring campaign. “We communicate on trends and in what we believe in with conviction,” Magid said.

In April, Studio 59 opens. The format is described by Bloomingdale’s executives as an interactive content creation hub where visitors get a behind-the-scenes glimpse into photo shoots, influencer interviews and other special events.

The vacation shop specializes in lightweight colorful print dresses and cover-ups from such labels as Poupette St. Barth, Rococo Sand and Hemant and Nandita, as well as flip-flops from Havaianas. “Travel is very important, especially to younger customers,” said Magid. “The vacation shop is also an opportunity to curate smaller resources. We have the shop in multiple locations.”

By bolstering designer and advanced contemporary areas, there’s an impact on prices and how they are perceived at Bloomingdale’s.  “Advanced contemporary is where we have added a lot of brands. It’s definitely on the higher tier of the price points, and we are continuing to expand on luxury, which you can see from the expansion of our designer ready-to-wear. But the whole high-low is always going to be part of our strategy, making the assortment accessible and aspirational,” Magid explained. “We’ve got customers across the board and every customer shops every spectrum. That’s not always a focus for some of our competitors.”

Last week marked the official unveiling of the three fashion floors, culminating in what has been a three-year, near top-to-bottom renovation of the 59th Street flagship, which accounts for 18 to 20 percent of Bloomingdale’s total annual volume of $3 billion, or at least $540 million in sales, according to sources. The home, beauty and children’s wear floors were re-created, and two footwear areas were consolidated into one shoe “emporium” on the fifth floor.

Last week marked Magid’s first interview since she joined Bloomingdale’s at the beginning of this year, succeeding Frank Doroff. Formerly with Lord & Taylor, Saks Fifth Avenue and Intermix, and most recently running her own brand consulting agency, Magid says she’s bringing a “fresh perspective” to Bloomingdale’s. But for the moment, the story is about the transformed rtw business she’s inherited at 59th Street. It’s no doubt a strategy to compete more aggressively against Saks Fifth Avenue, which is near completing its $250 million flagship renovation; Neiman Marcus, which last Friday opened its first store in the city, in Hudson Yards, and Nordstrom, which has set the opening of its Manhattan flagship on 57th Street for October. It will also be Nordstrom’s first department store in the city.

With the heavy lifting on Bloomingdale’s rtw floors completed, Magid will be challenged to advance the business even further in different ways. “We will apply the successes that we learn on 59th Street to all of our stores,” said Magid, giving a few clues on what lies ahead. “We definitely plan to emulate some of what’s here. We already have. The Century City store [in Los Angeles] is a good example. And we are renovating our North Michigan store [in Chicago] and will be taking some of the successes from here over there, such as the whole central denim presentation, when we renovate that store in the fall. So definitely, it starts with the flagship and the successes roll out.”

Another part of her job will be to find brands that interest customers. “It doesn’t stop. You have to keep evolving,” Magid said. One brand coming soon is Bosch.

Aside from running rtw, Magid wears two other hats, as head of bloomingdales.com and concessions.

“Bloomingdales.com has the fastest pace of change in terms of channels,” Magid said. “There are more initiatives to come. We are working on things. We always add enhancements to our site and just like in the stores, there is always an evolution in the product offer. We are definitely expanding services and definitely bridging the gaps between brick-and-mortar.”

With dot-com, customers want the shopping experience to be easier, Magid said. “That is always our goal, to make everything easier for our customer, to give her what she wants, when she wants it, wherever she wants it.” Bloomingdale’s is increasing the editorial content online, and soon launching buy-online, ship-to-store, called BOSS, having already implemented buy-online, pick-up-in-store, or BOPIS.

Bloomingdale’s doesn’t do any vendor-direct shipping, also known as drop-shipping, though Magid said it’s been discussed, suggesting it could be something for the future. Macy’s, which like Bloomingdale’s is a division of Macy’s Inc., is growing its vendor-direct business.

Through Bloomingdale’s luxury and contemporary fashion areas as well as in designer leather goods on the main floor, there’s been a noticeable rise in concession shops. “For us, it’s just about the product. It doesn’t matter what the model is. It’s about getting the best product to the customer,” said Magid.

“I’m just two months in. I am learning,” she continued. “I want to get to know this customer and I want to get to know Bloomingdale’s and what works here, and of course, I bring my knowledge from other business models. As I learn, we will continue to evolve. There has always been an element of cutting-edge and always an element of what the customer wants from us and what’s happening in the marketplace. I have a lot of history in department stores. I believe in Bloomingdale’s. What attracted me to the store is the energy, the activations, the service element, and that they do things differently.”

A self-described “product person,” the tall and willowy Magid took an interest in fashion as a young girl.

“My mother was a seamstress. She worked for Evan-Picone. She would help me sew my clothes. She sewed my high school prom dress for me. From when I was young, I was always into fashion. My mom tried to teach me to sew, but to be honest, I was better at directing than the actual sewing. I bought my seven-year-old daughter a sewing machine so I am continuing the tradition.”

Magid began her career at Lord & Taylor in the training program. She advanced to a buyer for dresses, a category that Lord & Taylor was really into, covering all the dress categories and price points.

She worked at Saks for 11 years, starting as eveningwear buyer and rising to senior vice president and general merchandise manager of rtw and kids. Later, she became chief merchant at Intermix. Most recently at her own brand consulting firm, she worked to find “the white space” and proper positioning for such brands as 3.1 Phillip Lim, and Amur, which uses sustainably sourced materials.

At the last round of European fashion shows, monochromatic dressing was conspicuous. “It’s extremely chic and it’s more about styling than about specific pieces. But it’s head-to-toe,” Magid observed. “There were winter whites that looked really exciting and beautiful shearling jackets with great knitwear underneath. It’s textural and kind of all in the same color family. We also saw lots of leather dressing — leather trenchcoats, leather dresses, leather miniskirts and in a range of olive greens, cognacs and burgundies, and an evolution of animal trends,” a favorite among Bloomingdale’s customers. Tie-dye and animal prints are selling, and Bloomingdale’s has had some “encouaging early hits” on neon, Magid said.

Asked to describe her personal style, Magid replied, “That’s a hard one. I am very eclectic.” But dressed in a basic black ribbed knit turtleneck and cognac-colored 3.1 Phillip Lim satin pant, she does seem to favor that monochromatic look.