The denim floor is just the latest project in what's been two years of renovations covering most of the 59th Street flagship. 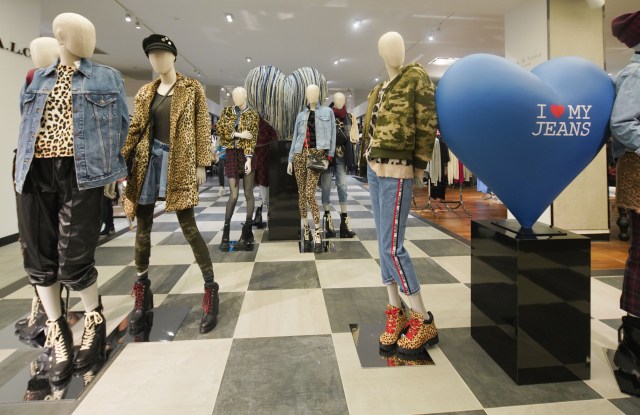 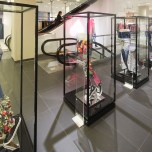 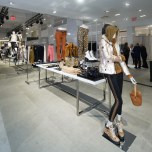 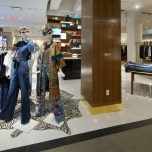 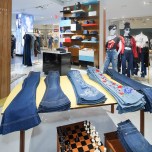 Doroff, a 27-year veteran of Bloomingdale’s, was giving a tour of the renovated denim floor on the second floor of the 59th Street flagship here, highlighting the expanded presentation of denim-based collections and designer shops, the many labels new to the store this season, and the stockpile of exclusives and jeans covering a wide price spectrum.

“This is a much more open, easier-to-shop destination with bigger vendor statements and bigger trend statements,” Doroff told WWD.

He declined to reveal just how big the denim business is at Bloomingdale’s, though industry sources say it generated about $150 million in volume last year, chain-wide, and that the category has been steadily growing.

For Bloomingdale’s, a store synonymous with contemporary fashion, upgrading denim is a matter of sharpening an edge it’s held over the competition for decades.

The revamped denim floor has a 25-foot-wide center aisle with sculptural chrome fixtures for showcasing trends. Currently, it’s all about track stripes, animal prints and utility styles such as cargo pants and camouflage prints.

Designers new to the store include Rag & Bone Collection, ALC, Alexis, Derek Lam 10 Crosby, 3×1, C by Chloé and Iro as well as AOLA, the new denim line from Alice and Olivia. There are also shops for, among others, AG, Current/Elliott, Frame, Good American, J Brand, Mother, Paige, Helmut Lang, T By Alexander Wang and Seven for All Mankind, most 300 to 400 square feet in size.

There are stylists on the floor to help customers explore the space. Walk-ins are welcome but you can also book an appointment and have the stylists pre-pull items.

There’s a Levi’s customization shop for embellishing jeans or shirts (they don’t have to be from Levi’s) with embroidery, patches, studs and buttons.

Jeans are priced from $98 for Levi’s denim to $1,000 for a Paige leather jean. The average price point is around $275, with the range extending from “opening price points to accessible luxury,” Doroff said, adding, “We have denim for everyone.”

Also housed on the second floor is Aqua, Bloomingdale’s trend-driven private brand offering sportswear, outerwear, cocktail and evening styles, cashmere, shoes and active. The in-house label is said to be approaching $100 million in sales and has been borrowing a little help from Bloomingdale’s designer friends by featuring monthly capsule drops. On display now are Aqua pieces designed with Zadig & Voltaire and other designer collaborations are in the pipeline, such as with Happily Grey.

In addition, there’s an active area, with a mix from Aqua and Puma products on the lower end of the price spectrum, and Adidas by Stella McCartney and Alo Yoga on the high end; a “Tee Gallery” for T-shirts, ranging from $38 tanks to T-shirts $125 or more, and an area targeting Millennials.

Touches of whimsy are evident with oversize sculptures, such as a three-dimensional tree covered in patchwork denim and a life-size giraffe wearing a pair of custom-made overalls. There’s a row of jeans encased in glass vitrines, all embellished to the nth-degree by artists commissioned to create denim works of art.

The official unveiling of the floor is Thursday, though judging from all the activity this week, the team will be putting on the final touches for some days after. Bloomingdale’s 59th Street will celebrate the opening with a series of events and an opening party Saturday featuring fitness dance, personalization with celebrity tattoo artists JonBoy, and embroidery stations. The second floor will also house advanced contemporary collections, where renovations are in progress.

The remake of the denim floor is the latest phase of the near top-to-bottom renovation of Bloomingdale’s 59th Street, 815,000-square-foot flagship, which has 555,000 square feet of selling space over 10 levels and accounts for between 18 and 20 percent of the retailer’s total annual volume of about $3 billion in sales, according to sources. Renovations at the site began two years ago with upgrades to the exterior and the kids department. Subsequently, the three home floors for tabletop, furniture and housewares were redesigned, and after that Bloomingdale’s unveiled a new shoe floor.

Coming up: a new third floor for “modern” collections and contemporary lines, which is currently under construction, and then the designer floor on four will be renovated. Several designers new to Bloomingdale’s will be showcased on three, but that’s under wraps for now.

Earlier this month, in another innovation, Bloomingdale’s unveiled a rotating pop-up shop, called Carousel, which every two months introduces a different merchandising theme. Carousel’s first installment — “Urban Explorer” — has an assortment of tactical gear, street-inspired and functional fashion, tech and wellness products, among other products that are chosen by style expert and New Yorker Eugene Tong. While the concept was widely hailed, retail experts who visited Carousel suggested the space seemed cramped, but Doroff said it’s being expanded soon.

Last April, Bloomingdale’s opened a new footwear floor on level five of the flagship, conveniently housing all women’s shoes on a single, 26,763-square-foot level, whereas previously women’s contemporary shoes were found on two and designer styles were on four. As Bloomingdale’s chairman and chief executive Tony Spring said at the time, “We are never going to simply redo our floors. We are going to reimagine our businesses.”