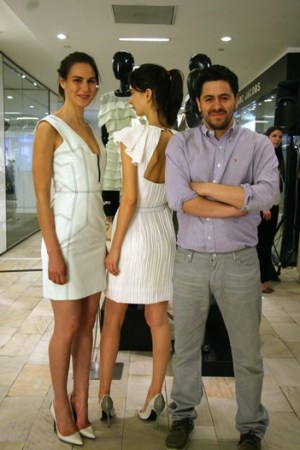 NEW YORK — With designer shoppers more reticent than ever, Bloomingdale’s is taking the initiative.

This story first appeared in the April 2, 2009 issue of WWD. Subscribe Today.

On Tuesday, the department store held its first Designer Collections Signature event — an all-afternoon happening to lure shoppers to the fourth floor of its 59th Street flagship and get them to dig into their wallets. Brian Reyes, Charles Chang-Lima and Lisa Perry made appearances; there were vendor reps for Donna Karan, Sonia Rykiel, Michael Kors, Herve Leger and Giorgio Armani’s Collezioni and Black Label, and models informally presented key pieces from the new collections.

Bloomingdale’s also offered a $1,000 “bMoney” gift card for every purchase of over $2,000, and customers filled out ballots for a copy of the $200 “La Femme Rykiel” book.

“We are approaching a transformation in retail and I think we are all reevaluating our events,” said Stephanie Solomon, vice president and fashion director for women’s ready-to-wear and accessories at Bloomingdale’s.

Bloomingdale’s had invited its key new designers and merchandised its collections in a way that the clothing racks were positioned in the middle of the floor. “The idea that the customer was able to get the look now without having to search for it was a big success,” Solomon said, adding shoppers had the chance to try on clothes, come out of the dressing room and meet the designer — all while enjoying food and wine and DJ’d music. “These are ingredients that make for exciting retail,” she said.

Solomon noted the importance of the intimate nature of the event, which is also less costly. “When it’s large scale with tons of people, it’s a little overwhelming at this time,” she said.

“It’s that emotional connection and the more intimate the event, the more you are able to have these kinds of connections,” she added. “That really is the root of what fashion is about.”

While Bloomingdale’s didn’t disclose total sales from the event, a spokeswoman said dresses continued to be popular, and Marc Jacobs, Armani Collezioni and Blumarine were among the labels that sold well.

“The store was busy and customers love meeting the designer, famous or not,” designer Perry noted, adding she found customer feedback inspiring. “I want to run back to my studio and design away,” she said. “It gets me all charged up.”

Chang-Lima concurred. “I like to listen to what the customers have to say,” he said. “They are kings, especially right now, so you have to listen.”

Reyes, meanwhile, is in his first season at the store. For him, the event had a personal significance. “I worked at Bloomingdale’s in Boca Raton when I was in high school,” Reyes recalled. “I did sales first, but then moved over to visuals. It’s kind of come full-circle.”