The retailer has turned to real New York guys for its reinvented fall look book. 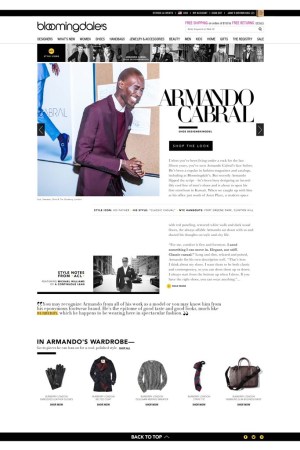 The store turned to Michael Williams of the style Web site A Continuous Lean to help it select the guys. Together, they settled on Antonio Ciongoli, creative director of Eidos; Armando Cabral, model and shoe designer; Bruce Bozzi, executive Vice President of marketing of the Palm restaurant; Matt Hitt, model and musician; Michael Chernow, co-owner of the Meatball Shop; Nick Sullivan, fashion director of Esquire, and Stephen Cheuk, owner of S<10 training in TriBeCa.

Each entry includes a short story about the man and details his style and favorite New York City hangouts. There’s also a quote about each man from Williams. For example, Williams calls Cabral “the epitome of good taste and good looks, much like Burberry, which he happens to be wearing here in spectacular fashion.”

The men were photographed in their homes or at their businesses and the outfits they’re wearing can be purchased with a click of a “Shop the Look” button.

“It’s a big departure for us,” said Kevin Harter, vice president for fashion director for men’s. “More and more guys are taking inspiration from street style, so we decided to build a campaign around stylish New Yorkers.”

David Fisher, executive vice president and general merchandise manager of men’s for Bloomingdale’s, challenged the company’s fashion and online teams to come up with a novel approach for the fall selling season, Harter said, and after brainstorming, the icons idea was born.

Harter said while the initiative kicks off with New York, in the future, the retailer will use men in other cities “where we have a strong men’s customer base.” He said that while it is not expected to be duplicated for spring, “we’re looking to anniversary it next fall.”

Harter said the men chosen for the inaugural campaign were deliberately selected to provide a “diversity of occupations and age. We want to hit a lot of guys.”

Harter said allowing customers to click and buy the looks in this way is also new. “It’s the first time we’ve done it on real guys,” he said. “We went after their own personal style and what resonated with them.”

The online look book will be featured within select Bloomingdale’s locations where customers in the store can browse the book on iPads in the men’s department. The company’s 59th Street flagship will devote windows on the Third Avenue side of the store to the initiative this month and a cocktail party in conjunction with T Magazine will be held on Oct. 15.