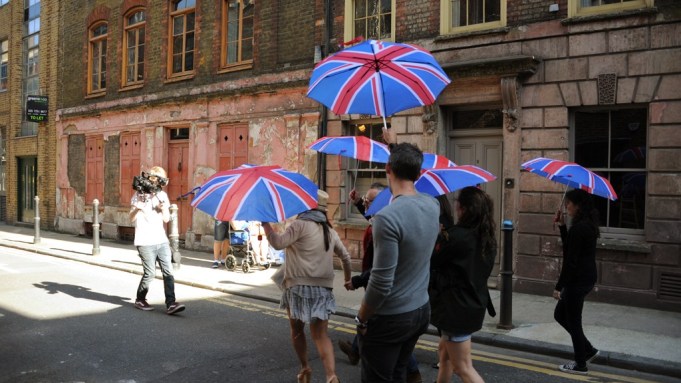 LONDON — The summer sun bore down on the streets of Spitalfields, East London, and the fish and chips were lukewarm. It wasn’t exactly a typical June day in Britain — but it could not have been a better one for Bloomingdale’s.

As part of “Brit Style,” a storewide celebration of British fashion, tradition and popular culture, a creative team from Bloomingdale’s swept across the U.K. for an action-packed summer week to shoot the Best of Men’s and Young Men’s trend catalogues for fall.

One sunny June morning, they shot looks on Savile Row, Westminster Bridge, Big Ben, the Houses of Parliament and the Coach & Horses pub on Bruton Street in Mayfair. Later that afternoon, they took to the pavement outside the grand East London homes of the early-18th-century Huguenot silk weavers, with their wooden concertina shutters and glass hurricane lamps lovingly restored by the current residents.

After London, the team moved on to the Sussex countryside, and to Liverpool’s Penny Lane. Shoots also took place in Snowdonia and Anglesey in Wales; at Eilean Donan Castle, near the Isle of Skye in the Western Highlands of Scotland, and at Aldourie Castle on the shores of Loch Ness.

“We were researching the trends for fall ’13, and a lot were inspired by Britain — there were tartans, plaids and tweeds. London Fashion Week is getting bigger, there are new designers coming up, and it’s The Beatles’ 50th anniversary. It was the perfect time to call out British fashion,” said Kevin Harter, vice president of fashion direction for men and home.“This is one of the most special catalogues we have ever done.”

He said the store tried to strike a balance between heritage names such as Hardy Amies, Turnbull & Asser, Burberry and Liberty, and up-and-comers such as Farrell, a line created by English musician Robbie Williams; Oliver Spencer, and Kent & Curwen.

The promotion will kick off during the first week of September at all 37 Bloomingdale’s stores, with the catalogues sent to Bloomingdale’s top customers and cardholders.

Although the catalogue focuses on men’s wear, women’s brands that will be included in the promotion include AllSaints, Karen Millen, Reiss and Ted Baker for apparel, as well as The Cambridge Satchel Co., Links of London and Stella McCartney in accessories. In home, exclusive products will include pieces from Fringe, Alessi, Royal Doulton and William Yeoward.

The women’s catalogue features the British model Lily Donaldson on the cover wearing a sweater by Aqua with the Union Jack shaped like a heart.

The retailer has also teamed up with Visit Britain, the national tourism board, to create custom travel experiences with a fashion focus. The travel packages, inspired by the landscapes and venues that appear in the men’s catalogue, will be available exclusively to Bloomingdale’s customers through American Express.

There is a partnership planned with Clear Channel Media & Entertainment where Bloomingdale’s will create a custom station on iHeartRadio featuring hand-selected music from the U.K. and two concerts in October that will be live-streamed on iHeartRadio.com and bloomingdales.com/ukrocks.

The concert on Oct. 10 will feature Emeli Sandé and Jake Bugg, while Rita Ora will perform on Oct. 17. Both concerts will take place at the iHeartRadio Theater in New York.

Five winners will be flown by the store to New York to attend their choice of the concerts, and will receive a $500 Bloomingdale’s gift card.

The store will also launch Talk is Chic, interviews with designers including Sir Paul Smith and Christopher Bailey, and pop stars including Sandé and Bugg on the impact of Britain on fashion, music and culture on bloomingdales.com, on screens in-store and on iHeartRadio.

“Christopher talked about music and fashion, British culture, the Internet — his passions and his favorite spots in London,” said Harter, adding that he spent an afternoon with Smith. “How charming is Sir Paul Smith?” he said. “I had a one-hour walk-through of his studio, and the whole experience was so special.”

As reported, Bloomingdale’s has created more than 250 exclusives with some 50 British brands, including Beatles-inspired umbrellas with London Undercover; four suits from Hardy Amies, named the John, Paul, George and Ringo ($1,195); Beatles cuff links from Deakin & Francis (retail $300 to $350); printed bags, shirts and bomber jackets from Paul Smith ($175 to $575); an assortment of T-shirts from Ted Baker ($99), and patterned shirts from Thomas Pink ($250).

There is also a collection of Beatles album covers, reproduced with permission of Apple Corp. Ltd., which hold printed pocket squares produced by Turnbull & Asser, that will retail for $150.

At the shoot in East London, a photographer snapped model Alex Dunstan decked in a leather jacket, waistcoat and trousers by Farrell as Blur’s “Country House” played in the background. Fast-forward a few minutes and the model rapidly changed into a two-tone gray Bespoken topcoat and claret-colored trousers, with blue shoes from Local Uniform.

Decked in his autumnal duds, the model gamely toted a newspaper cone filled with fish and chips — the traditional way of serving the famous dish, but one that has all but disappeared due to health fears linked with the newspaper ink.