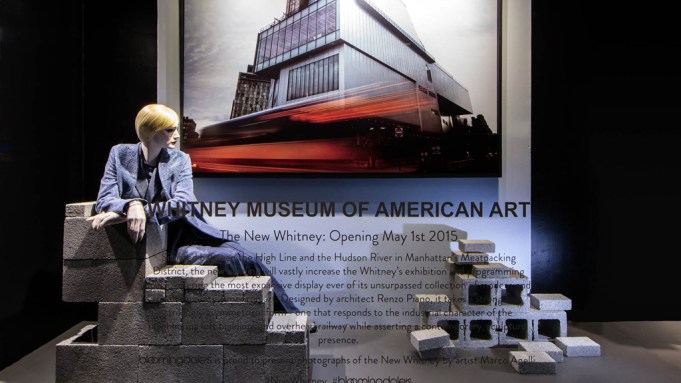 Bloomingdale’s sees retail and culture as a good mix.

With the Whitney Museum of American Art reopening Friday at 99 Gansevoort Street, Bloomingdale’s has issued special-edition shopping bags featuring artwork by Elizabeth Murray, Roy Lichtenstein and Edward Hopper, and has filled its Lexington Avenue windows with architectural photographs by Italian photographer Marco Anelli depicting the museum and its various stages of construction. The bags are available to shoppers in the 59th Street and SoHo stores until May 4 and the windows are up until May 5.

“We want to do more tie-ins with cultural institutions in our key markets such as New York, Chicago and Southern California,” Jack Hruska, Bloomingdale’s executive vice president of creative services, told WWD.

“Frankly, we have never done shopping bags for a cultural institution before,” Hruska said. “We usually do them with designers. Shopping bags are very important to a store. They’re part of our iconic brand imagery. They’re reusable, and they’re walking advertisements. No one else changes up their shopping bags to the degree that we do. They are themselves pieces of artwork.” Bloomingdale’s signature trio of bags the Little Brown Bag, the Medium Brown Bag and the Big Brown Bag have been around since the early Seventies, designed to hold products of varying sizes. Three times a year, special-edition bags are created tied to seasonal campaigns, promotions or a special event, temporarily replacing the Medium Brown Bags.