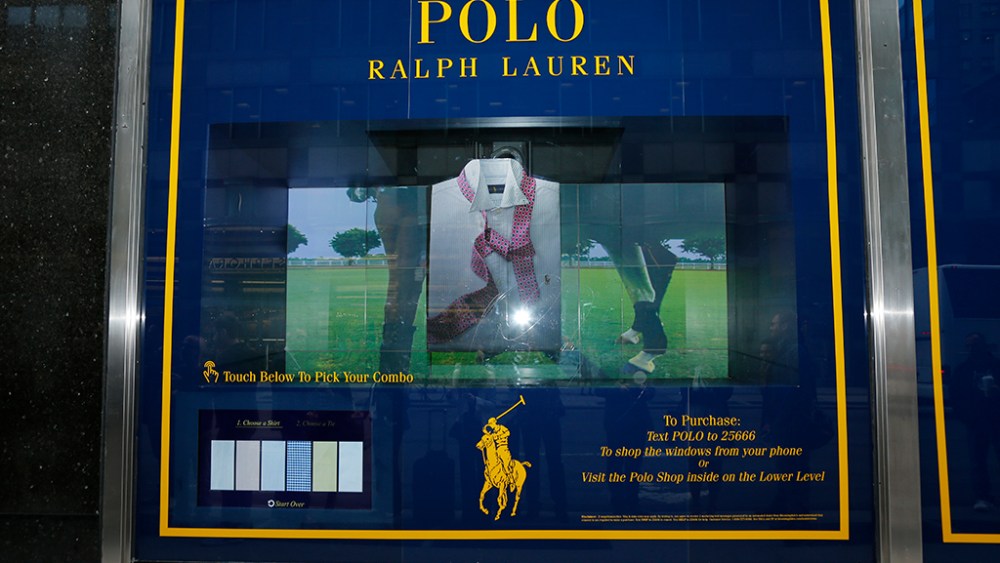 NEW YORK — “This is window shopping at its best.”

Spring, who was joined by David Lauren, Ralph Lauren’s executive vice president of global advertising, marketing and corporate communications, was preparing to unveil the store’s innovative Father’s Day windows that feature an installation of signature Polo Ralph Lauren merchandise. But what sets this initiative apart is that the windows are interactive and allow shoppers to use touch-screens to select polo shirts, chinos and other merchandise they can purchase immediately by texting an order from their mobile device or to the Polo shop inside the store.

“About 50 years ago, Ralph Lauren started here at Bloomingdale’s,” Lauren told WWD. “So we have a long history of innovation and building things together.” About 45 days ago, Lauren and Spring had a meeting and the retailer challenged the store’s largest men’s vendor to create something different for the all-important Father’s Day selling period.

“Tony said, ‘Give me something exciting. Make them touch my windows, I want theater,’” Lauren related.

The result was six windows equipped with high-definition plasma screens and touch-screen technology incorporated directly into the glass that allows shoppers to choose their own styles and colors. By touching the screen, consumers can change the polo shirts from blue to red, for instance, or the dress shirts from solid to a gingham pattern. In the dress shirt window, customers can also choose ties to match, and the projected image illustrates that tie being tied onto the neck of the chosen shirt.

Ralph Lauren has a history of embracing technology. In 2007, the company installed touch-enabled windows at its Polo and Rugby stores. “But this is a much grander scale,” Lauren said. In addition, the company offered a 4-D holographic runway show in Central Park during New York Fashion Week last September.

“Ralph Lauren is a very important part of our men’s business,” Spring said. “We have a special, long partnership and we challenged them to not just be important to our past, but for our future as well.”

Lauren said Spring, who was elevated to the top post at the department store last year, has been working to “evolve” the store and engage its customers. “It was a total collaboration and it feels like theater on Lexington Avenue.” He said when the windows were installed late Wednesday night, passers-by were already testing out the technology, even though the windows were not activated until Thursday morning. “People are definitely interacting with the windows,” Lauren said.

Spring said this initiative offers the best of technology and also “pays homage to the store experience.”

As part of the initiative, on the next two Fridays, Lauren said, sales representatives will be stationed in the street outside the store — and will work the Hampton Jitney bus line across the street — to help facilitate orders.

“This sends a message that Ralph Lauren and Bloomingdale’s are modern, innovative, collaborative and energetic,” Lauren said.

Spring said this is not a one-time thing, and that he’ll be pushing the Ralph Lauren team to offer customization for the next go-round. “That’s the next thing,” he said with a smile.

Polo will also have a starring role in Bloomingdale’s Father’s Day catalogue. New York Rangers goalie Henrik Lundqvist is featured on the cover of the catalog — and will be in the two remaining Lexington Avenue windows starting on June 11 — wearing an indigo hopsack Polo sport coat, long-sleeve polo and slim-straight Varick jeans and holding his daughter. Inside the catalog, the style setter also offers tips on style and parenthood.