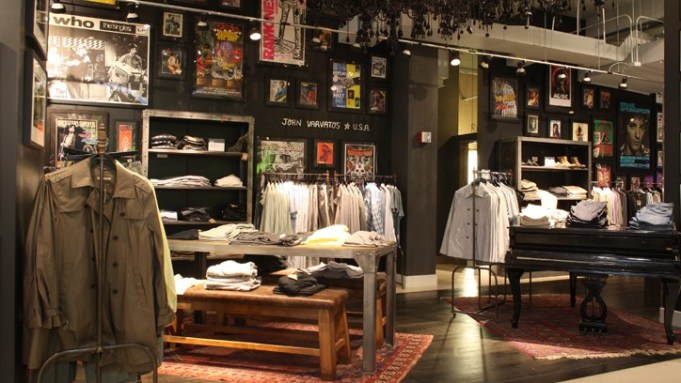 Bloomingdale’s has taken the wraps off the latest phase in the renovation of the three-level, 90,000-square-foot men’s store at its 59th Street flagship. The revamping of the main floor furnishings department and the shops on the midlevel is part of a two-year plan to upgrade men’s at the store. Last October, the retailer unveiled a revamped tailored clothing department, which was preceded eight months earlier by the addition of No. 59 Metro, a premium denim and contemporary sportswear department on the subway level.

“This is the next-to-the-last phase,” said David Fisher, Bloomingdale’s executive vice president and general merchandise manager of men’s wear. “We believe we’ve created one of the most unique men’s stores in the city.”

The renovation is not quite complete, however. A Turnbull & Asser shop — the brand’s first in-store shop in a U.S. department store, according to Bloomingdale’s — is slated to open by the end of the month, and the Polo shop is being relocated and redone. Fisher said Polo, the store’s largest resource, will span 7,000 square feet and will offer Blue and Black Label product. “It will look very opulent and Polo-ish,” he said, noting the shop will have its own entrance onto 59th Street. The site of the existing Polo shop will then be used to house classification sportswear resources and basic underwear, as well as Burberry and Michael Kors shops. This will mark the final phase of the renovation.

Across the aisle is a freshly revamped shirt and tie presentation with lifestyle cases and product from Zegna, Canali, Michael Kors, Ike Behar, Giorgio Armani and others. A hat wall and an expanded assortment of bow ties and pocket squares is also offered.

A Polo Ralph Lauren haberdashery shop is due to open today. This “shirt and tie outpost,” Harter said, will allow the store to double-expose the brand on the main floor as well as in the shop on the lower level.

A Montblanc shop has been added and there are also boutiques for Ferragamo, Porsche Design, The Art of Shaving, Burberry accessories and Paul Smith. A small outpost for Psycho Bunny merchandise has been a surprise hit, according to Harter. For fall, an Alexander McQueen accessories shop will be added to the mix.

On the lower level, a Zegna Sport shop has been updated to incorporate fixtures designed by Peter Marino, and a Varvatos Collection shop has been installed.

Further down, in what Bloomingdale’s refers to as its “midlevel,” CP Company, Theory, Acne and The Lab have new homes. Vendors in The Lab include Junya Watanabe, Raf by Raf Simons, Bespoken, Woolrich Woolen Mills, PS Paul Smith, D&G and Aquascutum.

Harter said brands that can boast “fashion and great trends” are still selling without any price resistance.

Finally, on the Metro level the store has built a new shop for Varvatos’ Star USA line. The shop, with its rock ’n’ roll influences, is reminiscent of the brand’s retail store in the former CBGB space on the Lower East Side.

Fisher said that, despite the economic downturn, there was no thought of delaying the renovation of the men’s store. “We were committed to the project long before the recession started. And we know that when we come out of it, we’ll be able to capture a much bigger piece of the pie.”

The idea, he said, is to provide as “broad an assortment as possible,” but not to downscale. “We have challenged our key resources to reexamine their opening price points,” he said, “but we’re still looking for resources that complement our offering with a ‘cool’ factor.” This includes brands that are “lightly distributed and distinguishing,” he said.

Fisher admitted the men’s business overall has been challenging and tailored clothing sales appear to have “hit a bump in the road.” But there are bright spots including Raf by Raf Simons, Levi’s, True Religion, Varvatos, sunglasses and shoes.

“We think we’ve created an exciting environment that gives men a reason to shop and buy,” Fisher said. “And we think we’re doing it better than anybody else.”