The retailer launches its holiday windows in style with a performance from members of a Broadway cast. 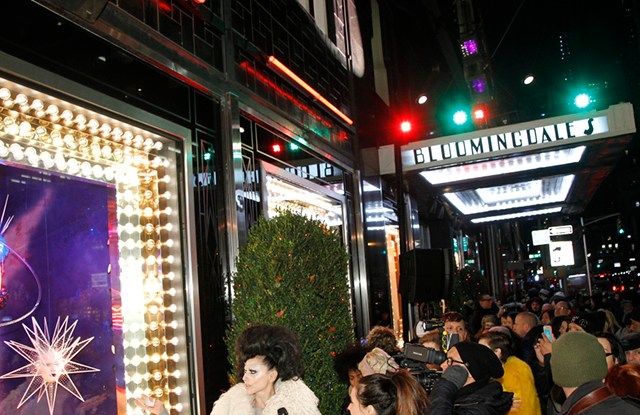 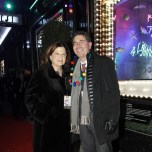 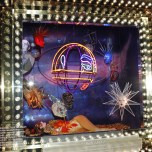 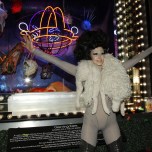 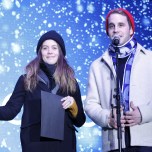 The weather outside wasn’t exactly frightful on Monday night, but it was chilly enough, and that was delightful for retailers, especially after last year’s unseasonably warm holiday.

“It’s cold and there’s good cheer,” said Tony Spring, chairman and chief executive officer of Bloomingdale’s. “Our job is to put good spirit into the community.”

Bloomingdale’s did its part, as it kicked off its holiday window unveiling with a performance at Beacon Court on 59th Street between Third and Lexington Avenues by members of the cast of “Dear Evan Hansen,” which is now in previews on Broadway. The musical would seem to have a dark storyline that includes the suicide of a troubled high school misfit, but the contemporary pop score and performance by Ben Platt as the cripplingly shy title character, who writes a letter to himself that’s mistaken for a suicide letter, has been called “funny and sweet and beautifully sung.” Platt and fellow cast members, Laura Dreyfuss, Rachel Bay Jones and Jennifer Laura Thompson performed “Anybody Have a Map” and “Waving Through a Window.”

For the last number, Platt said, he and the rest of the cast would sing a Christmas song. “I should say a holiday song. I’m Jewish,” he told the audience, before adding, “We implore you to sing,” as the intro to “Let it Snow” began.

When the big reveal finally came, the windows were filled with one-of-a-kind chandeliers inspired by Bloomingdale’s holiday campaign theme, light and created by eight different artists. In Inma Barrero’s window, “Reflections,” the sculptor started with an antique convex mirror from which hundreds of pieces of individually hand-crafted, unglazed porcelain were suspended with wire. Each piece showed the fingerprints of the artist and the shadows of the pieces repeated endlessly throughout the window.

“Aura” by Erika de Vries and Jonah Meyer, is a chandelier around the concept of the brightness of the individual spirit. De Vries, an interdisciplinary artist in photography, performance, neon, video and handicraft, and Meyer, a sculptor and painter, asked children ages two to 12 to write the phrase “lightness of being” while neon fixtures were bent to match each child’s handwriting.

Susanne Bartsch’s “Brilliant” chandelier uses neon lights and most closely resembles Leigh Bowery, a performance artist that Bartsch, who is known for her avant-garde fashion spectacles and night life events, brought to New York in the early Eighties. Bartsch also gave a nod to all the brilliant people who have touched her life. Bartsch turned up for her window’s unveiling wearing a huge black asymmetric hairstyle and stuffed animal lamb tossed over her shoulders like a scarf.

The chandeliers will be auctioned off at CharityBuzz.com/BloomingdalesAuction, to benefit Bloomingdale’s longtime charity partner, the Child Mind Institute.

“We’re adding lights and an extra dose of fun and enthusiasm and spirit this year,” said Spring. “We can’t control the weather or the macroeconomic environment, but we can control our assortments and variety. Last year, we had lots of cold weather products and it wasn’t cold.”

Spring said that Bloomingdale’s made an effort to provide much more variety “that speaks to our consumers’ needs and interests. There’s a lot more novelty. We’ve always been appropriately aggressive [on Black Friday.] It’s a market share kind of story. We’ll try to capture the business while people are shopping. Cyber Monday, too, and all the key import spike points that make this season.”