The retail chain is rapidly expanding and estimates that the company will have 100 locations nationally by the end of 2015. 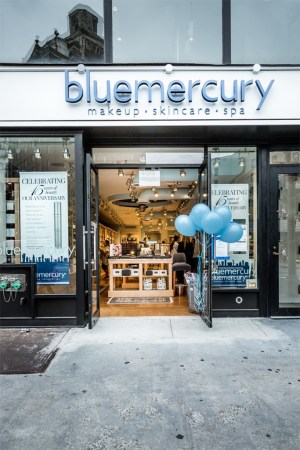 While industry sources contend that a few select vendors at Bluemercury reported a decline in sales at the specialty boutique, Barry Beck, cofounder and chief operating officer of Bluemercury, begs to differ.
“We are having a record year in terms of revenue and profit and have had 19 straight quarters of double-digit same-store sales growth,” said Beck.

Industry sources estimate that each Bluemercury door does between $3 million to $4 million a year.

According to Marla Malcolm Beck, cofounder and chief executive officer of Bluemercury, the retail chain is rapidly expanding and estimates that the company will have 100 locations nationally by the end of 2015 with big openings in Dallas and Charlottesville, VA.

To that end, in mid-October, Bluemercury will open two more New York locations, one on 88th Street and Madison Avenue and another on 92nd Street and Broadway.

“We have a bunch of stores in New York City and what we’ve learned is that 80 percent of our clients come from a five-block radius,” said Malcolm Beck. “Bluemercury is really the neighborhood store for beauty. It becomes sort of like a substitute drugstore. Our objective is to just stock the neighborhoods where clients are requesting for us to open stores.”

The store’s newest footprint, which opened on Sept. 13th, is located in the West Village, an area Malcolm Beck feels is underserved in terms of makeup selection. “There’s a lot going on in the corner where we opened,” she said. “There’s a Liquiteria opening next to us. The whole area is really expanding and growing.”

But the growth won’t stop there. In November, the company will relaunch its Web site. The site will include more options for editorial content such as how-to videos. Also, it will allow for easier mobile interface and purchase ability. Malcolm Beck is also continuing her blog, which she claims is where most purchases come from.

Meanwhile, the company is creating an app, set to launch next year, that will “tailor advice and client-specific benefits based on history and current favorites to determine what relevant new items the company should show them.”

“Everything to do with the omnichannel is a key focus for us,” said Malcolm Beck, adding that the company is determined to expand its blog, Facebook and Instagram to link its content to its clients. “Average income of the Bluemercury client is $150,000 plus. So we’re really serving her in the way she wants to be served, when she wants to be served.”

Malcolm Beck also looks to her proprietary skin care line, M-61, to grow her business and will be adding new stockkeeping units to it in the future.

“We’ve always been able to find the white space,” she claimed. “When we started over 90 percent of cosmetics were purchased at drugstores or department stores and so we’ve been a part of this revolutionary shift into the specialty channel.”