The brand will today open its first unit, a 500-square-foot door at the Roosevelt Field mall in Garden City, New York. 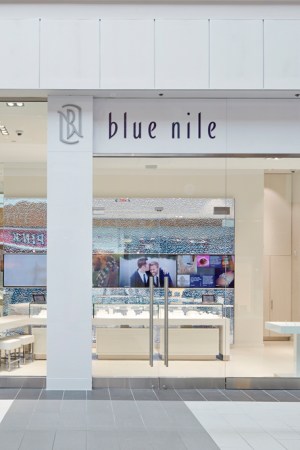 Fine jewelry e-tailer Blue Nile is putting its retail concept to the test.

Even though the company’s mostly limited itself to e-commerce during its 16-year run, the brand will today open its first store, a 500-square-foot door at the Roosevelt Field mall in Garden City, New York. The move was inspired by the brand’s two successful Nordstrom shops-in-shop, one of them in the same mall, according to Harvey Kanter, chief executive officer of Blue Nile.

He said the shops-in-shop – one in downtown Seattle and the other at Roosevelt Field – saw conversion rates that were materially higher than the brand’s overall conversion rate.

“Our thesis was that there is some subset of customers who like to touch and feel. We wanted to test this thesis,” Kanter said, noting that they found 91 percent of consumers who visited the shops-in-shop came in specifically for the Blue Nile experience; they weren’t random customers.

The combination of high revenues, foot traffic and conversion warranted a bigger test, which is how the freestanding door came to be. Kanter said the team chose a high-traffic location where Blue Nile could build a rich, hands-on experience. He expects the store’s sales to surpass the brand’s take at the nearby Nordstrom.

The shop is “demonstratively different” than other retail experiences, he said, calling it “Apple-esque” with its own version of a “genius bar.”

“It’s a consultative experience. Traditionally you have cases, but we have a small collection of product and associates take them [shoppers] to an area with tables and will pull out a 24-by-12 inch tablet and work to pick a setting and pick a diamond they love,” Kanter said.

He noted that the selling space is just under 400 square feet, smaller than a traditional jewelry store. The staff is very hands-on, and the shop lends itself to a digital format, which includes a virtual wall with a live social media feed. Kanter plans to use the online experience in-store to drive more revenue with less square footage.

He declined to say how much in sales the two pop-up shops generated, revealing only that they saw millions of dollars of sales combined.

The company drove $473 million in sales last year, and in addition to growing its retail footprint in the U.S., is significantly focusing on key global markets. Kanter said China is now the brand’s second-largest country sales-wise, and he expects the market’s revenues of $30 million last year to balloon to $100 million in two to three years. A general manager relocated from the U.S. to run the Chinese business.

He added that while the average price point in China is materially less than the $7,000 seen in the U.S., the biggest sale to date on an iPhone was for $396,000 from Beijing.

Although Blue Nile was one of the earliest online entrants, it has been slower than other e-commerce players to open its own store. Kanter said while he doesn’t know how much of the brand’s revenues will ultimately come from stores, he said when it comes to shopping, consumers crave a tactile experience.

This is the same conclusion reached by nearly every successful e-commerce launch in the past decade, including Bonobos, Warby Parker, Bauble Bar, Rent the Runway and Nasty Gal. The leaders of all these online-first companies now consider retail a major part of their overall strategy going forward.