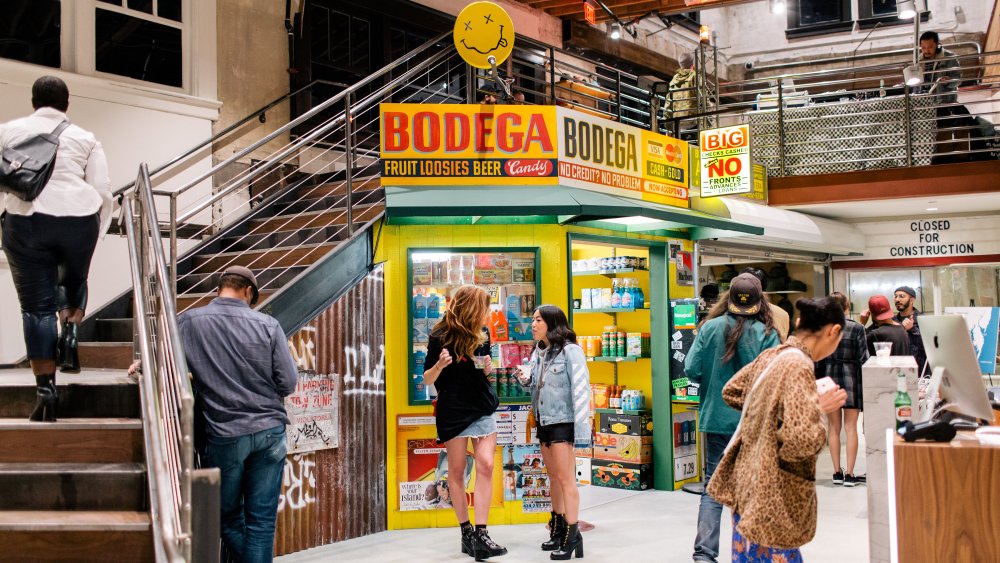 It’s a produce market in the front and cavernous purveyor of some of the hottest streetwear brands locally in the back for Bodega’s Los Angeles outpost.

The Boston boutique, the first fashion tenant officially revealed for the mixed-use project Row DTLA in downtown Los Angeles, is now on the eve of its West Coast opening, giving cause for celebration as the retailer’s founders partied the night away Thursday. The space is set to remain open through the weekend before final touches are completed at the site, followed by the official permanent opening in about a week.

“We’re getting there, considering where we were a couple days ago,” said Jay Gordon, who started the business with Oliver Mak and Dan Natola, during a quick walk-through of the space.

Bodega’s earned a reputation for its carefully crafted assortment and a meticulous eye on the details making up a shopper’s experience. Its Boston store looks like any ordinary bodega at first, but opens up into a shopper’s paradise. The Los Angeles location carries much of the same assortment — from brands such as Pleasures, Undercover, Fred Perry, Stone Island, Stussy, Nike and Wacko Maria — but builds on the experience.

The store, located at the far end of a pack of former industrial buildings on a campus that includes the old American Apparel factory, appears to be a produce market from the front. Walk beyond that and it’s two levels plus a mezzanine spread across roughly 8,000 square feet of footwear, apparel, limited edition collaborations with local brands (the first of which is a military-inspired collection around the NBA All-Star Game with New Era), a special space carved out for Vans Vault collection merchandise, art installations and hang out space filled with a stereo and plenty of vinyl.

A convenience store setup — some of which was used for the company’s booth at ComplexCon — is on the ground floor selling Bodega-branded merchandise. The retailer’s approach to the second annual ComplexCon largely summed up its approach generally to the business.

“This year was incredible and the response was so good,” Gordon said of ComplexCon. “It really opened a lot of doors. My thing was I didn’t want it to be all about the retail. That’s why we did the hair and makeup and the nails. There was tattoos and the radio station. It shouldn’t be all about selling product. You can talk about the culture and people really appreciated it.”

Bodega made waves in 2016 when it was first said it was going into the Row, helping set the tone for where the project was going directionally. Plenty of fashion brands and retailers have opened since then, with Bodega originally set to open last year. After months putting together the space, Gordon’s breathing a sigh of relief, so when asked if the team is already thinking about the next store, he smiled and shook his head: “No. This took six months everyday. Right now, in the back of my head, there are other cities that I would personally like to do that are underserved or just don’t have the representation that they should have, but right now, no.”