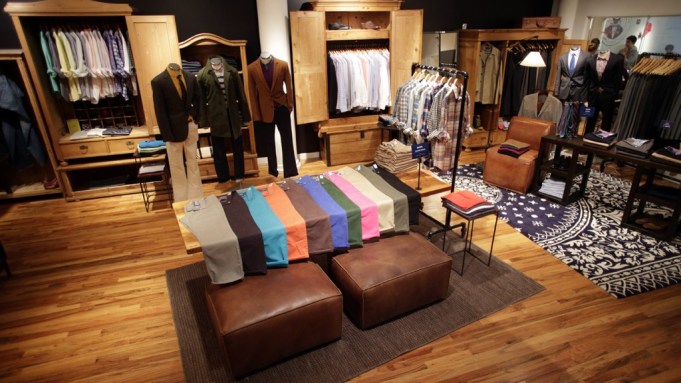 The showroom-cum-retail store allows customers to see and try on the full range of Bonobos suits, shirts and pants and order product from the Web site, via appointments with personal “guides.” The Palo Alto location joins an existing shop in New York, which opened last year, and a Boston unit that opened in April, and Bonobos plans further openings in the months ahead.

Bonobos is the latest online retailer to join the brick-and-mortar world as sites aim to bring their brands to life outside the virtual world and allow customers hands-on interaction with product.

Gap Inc.’s Piperlime opened its first freestanding store in New York’s SoHo neighborhood on Sept. 6. Unlike Bonobos, the store stocks inventory that can be purchased on the spot. The 4,000-square-foot space offers women’s apparel, footwear and accessories, in addition to kiosks that link directly to a full range of men’s and women’s offerings on its Web site.

Prescription glasses e-tailer Warby Parker operates a showroom at its New York headquarters in the Puck Building that customers can visit to try on frames. The company has also installed eyeglass displays at 10 partner retail stores including Bird in Brooklyn, The Perish Trust in San Francisco, Shop Good in Oklahoma City and The Standard hotels in Los Angeles and Miami.

Pop-up shops have become a favorite gambit for online retailers dipping their toe into brick-and-mortar. In May, the fashion and home site Fab.com opened a temporary boutique in SoHo to coincide with the International Contemporary Furniture Fair. In June, Mr Porter constructed a pop-up store in the Meatpacking District, dubbed Suits & Style, as part of an integrated promotion with USA Network’s “Suits” series. The shop offered a range of accessories for immediate purchase and Microsoft Surface digital tabletops to shop the Mr Porter site.

Also in June, Everlane opened a pop-up shop in NoLIta to showcase its premium T-shirts, bags and belts. An array of iPads inside allowed shoppers to order product from the Web site. “The goal was to create brand evangelists and excite customers,” said Peter Hananel, who helped execute the project and is founder of a consultancy that specializes in bridging the off-line and online retail worlds.

Hananel said the goal of off-line outposts for online brands should be as much about branding as selling. “It’s a hospitality environment and not just a selling environment. Apple has done this really well — people go to those stores to hang out and browse the Internet,” he explained.

The risks of moving into the physical world include diverting resources from the core online business and the significant costs of operating in a brick-and-mortar environment. “There’s the danger that it contradicts the entire business model. The question is: How do you let people touch and feel your product without falling down the rabbit hole of building capital-intensive stores? You can creatively dip your toe in the water and have maybe five stores in key markets, which can be impactful. The Everlane store, for example, drove tremendous amounts of press.”

The company plans to do another pop-up shop in New York — its preferred city due to its population density and productivity of stores — but doesn’t envision establishing a permanent boutique. “We couldn’t really open a store and support the business model and cost structure that we’ve developed as an online-only brand,” explained Michael Preysman, founder and chief executive officer of Everlane.

Bonobos chopped its advertising and marketing budget in half this year to help pay for its investment in retail. “My thinking is why spend money on advertising versus a customer experience,” said Andy Dunn, founder and ceo of Bonobos. “It’s a conscious decision to migrate resources from marketing to the guideshops. We think we get a higher return on investment on them than from advertising.”

Finding the right guides to staff the Bonobos stores is crucial to their success and the positions are well compensated to attract high-caliber candidates. Guides are paid a base salary plus earned commissions and can earn north of $75,000 a year. They also receive equity and stock options. “We get people who would not traditionally consider working in a retail store,” said Dunn.

For example, Obie Hansson, who works at the New York shop, was previously a manager of an upscale sports bar and Avi Levine was formerly a regional sales manager at Equinox health clubs. Emily Lanster, a guide at the Boston shop, was a student events coordinator at the Harvard Business School.

Depending on size and traffic, each shop has three to six guides, one or two managers and two or three greeters to help with walk-in traffic. Each guide sees about five or six customers a day, with each appointment lasting about 45 minutes.

Once an appointment is complete, the guide can become a familiar customer service touch point for the customer. “They can come back and see the same person. They have the guide’s e-mail and phone number. It’s like the barber shop model,” explained Dunn.

Bonobos has so far found the shops to be remarkably productive and, at about 1,000 square feet in size, cost-efficient to finance. Next month, the company will open additional units in Chicago and Greenwich, Conn. The company is seeking locations in Austin; Washington, D.C., and San Francisco, which it is aiming to open by yearend.

“The reason this model works is that we’re driving higher economic efficiency from a small space, focusing on service rather than inventory,” said Andy Dunn, founder and ceo of Bonobos. “It dials down the emphasis on real estate and inventory,” two of the most expensive costs in retail.

The New York shop, which is located within the company’s Chelsea headquarters, is ringing up between $2,000 and $3,000 in sales per square foot and the Boston shop, situated on the second floor of a Newbury Street building, is somewhere north of $1,000, said Dunn. Those figures handily beat some of the industry’s most effective retailers — albeit on a much smaller scale — including Ralph Lauren at $836 a square foot, J. Crew at $596, Urban Outfitters at $511 and Abercrombie & Fitch at $426, according to a 2011 RetailSails study.

A visit to a Bonobos shop can turn a shopper into a more valuable customer. Purchases at a guideshop are nearly double the average order value of conventional purchases at Bonobos.com. Guideshop customers are also 77 percent faster to place a second order down the road, and those orders also tend to be larger.

Shop customers buy more shirts and blazers compared with the typical online Bonobos shoppers, who often only know the brand for its original pants business. A full 30 percent of all Bonobos suit sales are generated by the New York shop alone.

Almost everyone who comes into a Bonobos guideshop walks out having placed an order, with a conversion rate of 92 percent. Dunn envisions up to 25 shops in the next five years, although he cautions he’s not sure where the point of diminishing returns for a rollout of that kind stands.

The Palo Alto shop is located within a new West Coast technology center opened by Bonobos. Apart from serving customers, the shop will serve as a lab for the technology team to gain first-hand feedback from shoppers about the site and learn new ways to improve the online service experience, said Dunn.