The singer will create three apparel collections with the British e-commerce site. 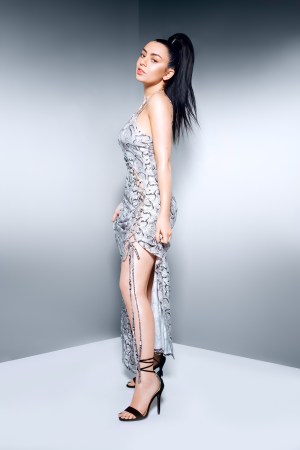 LONDON — British online retailer Boohoo.com has unveiled its spring 2016 collection done in collaboration with musician Charlotte Aitchison, known as Charli XCX. This is the second of three apparel collections that the 23-year-old singer is creating with the British e-commerce site.

Inspired by the Nineties with a nod to the Seventies, the songstress noted that the collection had “moved onto a more Y2K Millennial-inspired moment.” It has been divided into two parts, festival daywear and nighttime party looks.

“I think it’s just for any girl who wants to go out and have fun,” Aitchison told WWD. “The collection is about easy-to-wear, and it’s easy to wear it in different scenarios, so definitely cool, young and probably a bit rebellious.”

Before she set her sights on a career as a musician, Aitchison aspired to be a designer. “I did a full book of sketches and drawings when I was a kid,” she said. “I always wanted to be a fashion designer, so it was kind of like in my brain playing out that role. But it was really fun to be so involved in choosing the fabrics, learning what cuts work, and what you can do with certain materials. I pulled references from some of my favorite designers.

“I think it was also watching movies like ‘Romy and Michelle,’ and even ‘Legally Blonde’ when she restyles herself as a lawyer. I like the idea of makeovers and I always used to draw dress ideas that I would want to have. I used to staple clothes together and my mum would get really annoyed because I would rip out her old clothes and staple them to make new stuff because I couldn’t sew. I had to staple.”

She said design is something she’s “dabbling in and having fun with. I would love to learn more about it for sure but, you know, this is fun for me. This is an extra thing to do, to bring another side of my personality to my fans, and that’s always really good to do I think.”

The 39-piece Boohoo x Charli XCX range features looks including a denim dress, ivory lace crop top, peasant skirt, slipdresses and an assortment of accessories. The price range is 4 pounds, or $5.70, for ear cuffs to 25 pounds, or $35.50, for a snakeskin-print dress. The collection will be sold on the brand’s Web site.

Carol Kane, Boohoo.com’s chief executive officer, told WWD last year that the U.S. is the e-tailer’s fastest-growing market with sales that have been increasing steadily month-to-month due to the brand’s “We are U.S.A.” spring campaign featuring Bella Thorne, Angel Haze, Hannah Bronfman and Chloe Norgaard.

This collection follows the holiday range designed by Aitchison, which sold out. “I think my fans were really excited about wearing it and I just want to have that special connection with girls, with my fans and be able to wear stuff that I would genuinely wear and feel good in. I want them to feel good.”