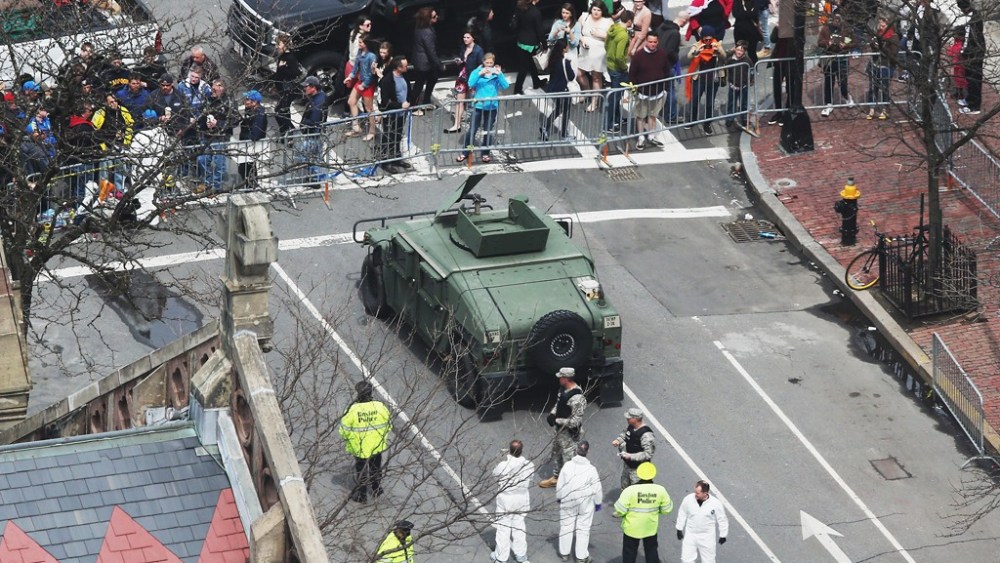 That is now the focus for Boston area retailers and their employees this week in the wake of the deadly Boston Marathon bombings and the harrowing four days that followed.

Most area stores reopened Saturday after the capture of the remaining suspect in the attack, Dzhokhar Tsarnaev, and the shooting death of the other, his brother Tamerlan Tsarnaev. Shoppers returned over the weekend, although the focus for many was less on buying than on companionship, executives said.

“Everybody is still kind of in a state of shock about what happened and how close it was to where we are,” said Tionna Conley-Range, a supervisor at the Lucky Brand store in Copley Place. “We’re trying as a unit and as a community to recover. Today’s shoppers seem to be in better spirits than yesterday, which is good.”

While several blocks on Boylston Street remain cordoned off as a crime scene, most stores and businesses in the Copley Square area that could reopen Saturday did. One exception was Lord & Taylor, located at the finish line and across the street from the second explosion, which remained closed Sunday.

The area around the store is part of the crime scene and the store’s reopening was pending a decision by law enforcement officials working on the case. The store has been closed since the day of the bombings. A company spokesman declined to provide further details on the reopening or the economic impact of the closure.

Lord & Taylor is expected to make an announcement today in conjunction with the city of Boston and Mayor Thomas Menino’s office.

In the short-term, stores that were forced to close should recoup 90 percent of their lost revenues —with 75 percent of that happening within the first week they return to normal hours, said Adam Rose, coordinator for economics at the National Center for Risk and Economic Analysis of Terrorism Events.

The MBTA restored public transportation late in the day Friday and Amtrak has resumed train service between Boston and New York, but air travel will be essential to the city’s financial recovery. How Boston’s tourism will be affected by the explosions will be a key component to the city’s economic rebound. After 9/11, there was a two-year decline in air travel and related tourism nationwide and more than 80 percent of the related losses were due to that dip in air travel, Rose said.

Menino has set up a Business Assistance Center to help the hundreds of Back Bay businesses impacted by the bombings to help them reopen as quickly as possible.

Saks Fifth Avenue’s Boylston Street store, adjacent to the Boston Marathon finish line, reopened Saturday after Friday’s citywide lockdown. Kathleen Ruiz, senior vice president of vendor and store marketing and public relations, said, “The sense of pride for Boston is apparent throughout the city as its residents began to flood the streets and stores again, including Saks, which was busy on Saturday as customers shopped with friends and visited with sales associates, many connecting for the first time since the tragic events.

“While there is a long road of healing ahead for the city of Boston, today there is a sense of hope in the air as a major chapter of the story concluded on Friday evening.”

Saks plans to donate 10 percent of the sales from its Friends & Family event from Wednesday through May 1 to The One Fund, which was created by Massachusetts Gov. Deval Patrick and Menino to raise money for the families most affected by Monday’s bombings. Therapy dogs were roaming Saks over the weekend for customers and employees “providing a moment of happiness for all during a tough time,” Ruiz said.

Michael Gould, chief executive officer of Bloomingdale’s, said the company’s store in Chestnut Hill was closed Friday but reopened Saturday and “it was a decent day.” He said that he expects “it’ll get back to normal business soon.”

Residents in Watertown, Mass., the epicenter of Friday’s dramatic manhunt, were starting to resume their routines though the week’s events were very much still a topic of conversation, according to Renee Escobar, a Foot Locker salesperson in the town’s Arsenal Mall. “A lot of people came to the mall Saturday because they just wanted to take their minds off everything that has happened. Today you see more shopping bags. People are shopping to shop.”

“The people who experienced the whole lockdown, especially the ones who heard gunshots and everything, might be traumatized. Of course they’re going to be traumatized,” she said. “The mall is kind of like a ghost town. There are not too many people shopping. It’s not like a usual Sunday.”

At Elie Tahari in Copley Place, staffers were “staying upbeat, positive and comforting to make sure people have a pleasant experience during these tough times,” said a sales associate, who asked not to be named. “Every few people mention what happened but we are trying to get people’s minds somewhere else.”

With the Boston Bruins playing an afternoon game at the Boston Garden and the Boston Red Sox slated for a doubleheader at Fenway Park, many sports fans were making their way to Boylston Street to look at the memorials that have been set up for the Boston Marathon bombing victims, the Tahari employee said. “Traffic in [Copley Place] has been pretty good and Saturday was a really good day,” she said.

Greg Mongno, regional sales manager for Brooks Brothers, said the company has nine stores in the Boston area — seven full-line stores and two factory outlets — all of which are now open and are reporting “strong business to plan.” The company will donate 10 percent of its net sales from the Boston-area stores to The One Fund, he said.

Lucky Brand reopened its Copley Square boutique Saturday at 4 p.m. to give staffers and customers a chance to catch their breath after what was a harrowing week for many. Conley-Range said, “This is kind of like our home so we wanted to open it up as we would our home to let people know we’d be here for them. Reopening was just a way for us to let people know that we want to band together.”

Travis Funston, a manager at Chico’s in The Shops at the Prudential Center, said Sunday, “It was quite busy Saturday. There are lots of hotels nearby and people go stir crazy when they are stuck inside for a day.” And shoppers weren’t just looking for company or something to do, he said. “They were buying a little bit of everything.”

Neal Black, ceo of Jos. A. Bank Clothiers Inc., said: “We had two stores closed right away after the bombing due to their close proximity to the race course and the finish line, one of which is right on Boylston Street. None of our employees were injured in the explosions, nor, as far as I know at this time, were any of our customers.”

On Friday, during the citywide lock down, four stores were closed but several others in the surrounding area were “open and operating as usual,” he said. “We are cooperating in every way possible with the directions from law enforcement and the safety of our employees and customers is our top priority.”

In the midst of conducting a survey about the national security risks people perceive through terrorism, Paul Slovic, a University of Oregon psychology professor and president of Design Research, said beyond the physical damage caused by a terrorist attack, there are more subtle factors that can be more impactful, such as consumers’ risk perception and how competent officials were. “The question is: Is this going to happen often and when and where?” Slovic said. Until we find out more about the motive and if there was a broader thing going on with more associates, it’s not clear whether it’s over in a sense.”

That said, the city has shown its mettle. “For Boston a lot of positivity has come from this. We have seen all the heroism and compassion from law enforcement officials and everyday people,” he said. “All these things continue to present a positive image of Boston.”