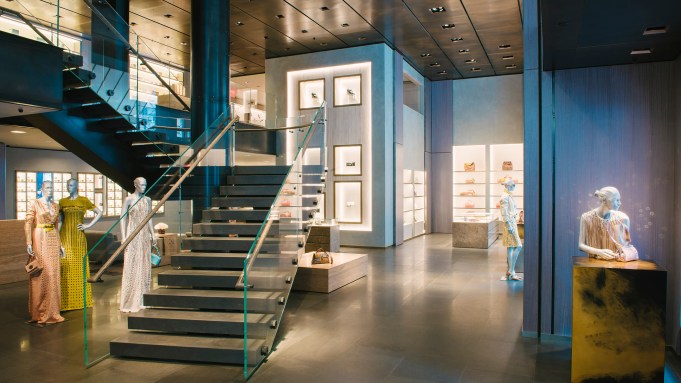 NEW YORK — When Bottega Veneta opened its first store outside Italy in 1972, the brand set down on Madison Avenue — a location near which it has now returned with a much larger, even more strategically important flagship.

Following 11 years on Fifth Avenue, Bottega this week unveils its new maison at 740 Madison Avenue — a megastore, for which three landmark town houses were conjoined, creating a behemoth temple to Italian luxury and leather goods. To mark the opening, the brand has transported its runway show from Milan to New York as a one-time-only celebration for its American followers.

The maison is Bottega’s largest store in the world. Measuring close to 15,000 square feet, the space’s five floors house the full breadth of Bottega’s offering, including lesser-seen categories such as home, dinnerware, furniture and fine jewelry.

Creative director Tomas Maier, who has spent close to five years overseeing the project, said of the store’s premise: “Everyone in America travels to New York. This is the one place that, if you are a Bottega lover or want to discover something and don’t know it that well, you can really get the feeling. I wanted people to experience the whole world of Bottega — not just a woven slipper you might have seen online.”

Maier said the maison’s immersive nature is an ode to today’s consumer culture, where distracted indifference often trumps ready engagement. “I think shopping in the store is a decision for all of us. It’s not like 30 years ago when shopping was a favorite way to spend time, and every Saturday you’d say, ‘OK, we’ll go for lunch and go shopping.’ People don’t do that anymore. You shop online for the necessities, but if you decide to come here, I want you to have the best time,” he said of the need to present a “wow” factor experience.

Maier was inspired by New York’s skyline when conceiving the store’s color palette, materials and layout — lending it a classic, moody tone. The maison’s first floor, stony and linear, displays a large spread of handbags, eyewear and small leather goods for men and women. Just above, the mezzanine floor includes dedicated women’s shoe and fragrance departments — both offering customizable selections.

Upper floors are merchandised with a mix of leather accessories, jewelry and ready-to-wear for men and women — each one displayed in warm environments incorporating design accents such as suede, tonal wood, sumptuous carpeting and comfortable lounge furniture.

The top floor, which Maier has dubbed “The Apartment” sells Bottega’s full line of home and furniture designs — their arrangement intended to evoke an Italian expat’s ideal New York residence.

The maison’s expansive size affords the store unobstructed sunlight — a New York luxury which Maier capitalized on when designing it. He prominently incorporated the town houses’ original sweeping windows into each floor’s dynamic, allowing for natural light.

“For me it’s a pleasure. I’m very interested in architecture; I grew up in that environment. I always have architecture projects, when one is finished, I feel like I need a new one — it’s really terrible.

“Architecture is part of being a creative director for me. It’s part of this brand and the way people should be received, the way the environment should look, the way material feels,” he said of the task.

Scattered throughout the maison are various stations dedicated to personalization — spanning small leather goods to handbags and fragrance bottles to suitcases. Embossing, stamping, and — most unique — stitching are all techniques available for customized looks.

Maier noted that Bottega clients have a large appetite for customized products: “Designing we do ourselves, but customizing is a big part of our business. We receive requests every week, all the time, all over the world. It’s a huge variety of products from ready-to-wear, bags, suitcases, travel sets, outfitting for planes — everything goes.”

For the opening, Maier has also designed a 33-piece leather goods capsule collection, called “Icons of New York.” Bags and small leather goods, priced $380 up to $6,500, are embroidered with metallic thread to mimic the Manhattan skyline, while other styles are woven with colorful lacing accents to mimic the city’s subway map.

“We have that loyal customer, but I think it’s also about how we attract a new customer. I think you also have a whole generation of people who are not into BS and are more into integrity and provenance.

“They are more into ‘I know where that comes from, I know how it’s made; I know they don’t use endangered species.’ Everything is controlled, Kering is very on top of that. There is no fur, but we don’t talk about all that stuff because for us, it’s a no brainer,” Maier exclaimed of Bottega’s parent company, which also owns Gucci, Alexander McQueen and Saint Laurent.

This is not to say the brand is avoiding social media altogether. Last week, Bottega unveiled its inaugural digital-first seasonal campaign — with an eye toward attracting a client online, rather than via printed paper. The campaign, a series of short videos, is to be distributed atop taxis and bus stops, as well as on Instagram, Twitter, Weibo, WeChat and Facebook. Printed campaigns will take the form of collaged video stills.

Bottega has faced its challenges over the last 18 months given the switch in fashion’s aesthetic. Kering’s third-quarter earnings report issued in October detailed that the brand’s sales were down 4.5 percent overall but up 0.9 percent on a comparable basis and noted that the “increase in revenue for leather goods reflected the success of its new collections. Bottega Veneta…is continuing to invest in communications and digital marketing to strengthen its ties with existing customers and Millennials.”

Bottega chief executive officer Claus-Dietrich Lahrs indicated how important the new flagship is to the brand’s strategy to jumpstart growth, pointing to its recent communication and marketing efforts. “We have recently started a new chapter in Bottega Veneta’s history by communicating different facets of the brand through bigger events and multiple platforms.

“Starting last September with the spring 2018 fashion show, which is now reaching the stores being supported by an innovative digital-first ad campaign, we began to establish a forward-thinking approach to luxury that speaks more clearly to today’s consumer. The opening of our third maison is a crucial part of this chapter and an important cornerstone in our retail network,” he added.

Lahrs also noted that Bottega’s new Madison Avenue store demonstrates how the U.S. market remains crucial to the brand’s success: “This significant investment in New York reflects the importance of both the city and the U.S. market to Bottega Veneta. The location is rooted in our past through its location on Madison Avenue where Bottega Veneta opened its first store in New York in 1972. It also looks to the future with its emphasis on offering an exceptional and unique retail experience as well as an unsurpassed level of service to our clients. We have high ambitions for the brand and want to keep surprising our existing and new clientele, both in New York and the rest of the world.”

On Friday evening, Bottega will stage its fall 2018 runway show in New York at the original American Stock Exchange on Trinity Place. Bottega will be the first brand to stage a runway show in the space, which is to be immediately followed by an after party.

Maier saw the store opening as a novel opportunity to further ingratiate the brand into the lives of Bottega’s top American clientele. “Having the show here while opening our biggest store in the world, I thought, ‘We will never have a reason to show in New York, because we are Italian so this is the one time we should bring the show to New York,’” he said.

Once the show comes to a close, Maier will quickly pivot his attention to the brand’s resort collection, as well as the design of the next maison — slated to open in Tokyo’s Ginza district within the next 16 months.

Maier, at the helm of Bottega since 2001, has quietly outlasted many others in creative director roles. But true to character, he feels the feat is not one to fuss over: “I think Karl [Lagerfeld] beats me a while longer,” he joked. “I agree it’s not that common at this point. But we’ve all been on-the-go for all those years that it went by in no time. There is never time to think because we always have another thing.”