NEW YORK — The new Adidas sport performance flagship on the corner of Broadway and Houston Street here is the company's largest store in the world and showcases the breadth of its sport product offerings in a sleek design setting. 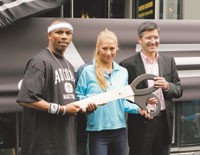 NEW YORK — The new Adidas sport performance flagship on the corner of Broadway and Houston Street here is the company’s largest store in the world and showcases the breadth of its sport product offerings in a sleek design setting.

The 30,000-square-foot space features everything from watches and sunglasses to sports bras, customized sneakers, children’s apparel, bikinis and the new Stella McCartney line.

“We wanted a place to showcase our entire collection,” said Erich Stamminger, president and chief executive officer of Adidas North America. “Many stores don’t have the space to show more than a small selection.”

On the downstairs level are products for running, yoga, basketball, boxing and tennis, among other sports, as well as the new Stella McCartney line, while the second level features a selection of Adidas Originals products, children’s merchandise, as well as equipment and accessories, and a Mi Adidas area, where shoppers can buy customized sneakers based on their personal fit and design specifications. Company executives declined to give sales projections for the store.

The walls and design are in black so that the products stand out, said Todd Seidel, senior retail development manager for the Americas, and some of the apparel hangs off hooks to look as if it is hanging in a locker, he noted. Prices range from about $10 for accessories up to as much as $250 for the Adidas 1 sneakers. Plasma panels and large photos of the company’s sponsored athletes adorn the walls.

The flagship is the company’s fifth U.S. performance store and its second American location to open with this new design concept. The first U.S. store with this design opened in Las Vegas in July and has already exceeded expectations, Seidel noted.

Adidas’ New York showrooms are moving into the same building above the store, said a spokesman.