ATLANTA — Denim brands are adapting creative business strategies to cope with a new wave of retail consolidation and unprecedented levels of competition.

From mass to luxury, the number of denim lines is multiplying, while the retailers'... 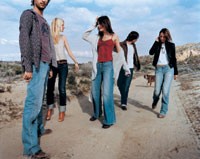 ATLANTA — Denim brands are adapting creative business strategies to cope with a new wave of retail consolidation and unprecedented levels of competition.

From mass to luxury, the number of denim lines is multiplying, while the retailers’ pie is shrinking — such as the mergers of Federated Department Stores with May Co. and Sears with Kmart.

To avoid being at the mercy of big retail, denim brands are opening and expanding their own stores to gain control of brand image and presentation. To expand distribution in a shrinking retail arena, denim lines are launching divisions at higher and lower price points. Like retailers, manufacturers are zeroing in on target consumers and developing product for underdeveloped consumer niches.

Sensing a demand in the moderate market for the same contemporary looks that made lines like Diesel a success, the company launched Jeanstar 18 months ago, with special fabrics, washes and details, retailing at $42 to $58. Bandalino Blue, a denim division of Bandalino sportswear aimed at an updated misses’ customer, launched in January 2005 at $40 to $54.

The new lines represent consumer segments that retailers are starting to explore but have yet to fully exploit, according to Jack Gross, chief executive officer.

“There’s huge opportunity, and we’ve only scratched the surface,” he said. “To date, moderate sportswear and denim is all together in one department, but we think it can evolve into moderate, contemporary and denim categories. The moderate customer doesn’t want dumb [looks]. We have to be students of denim. We know that missy is a size, not an age.”

“Retailers are under pressure from many areas, but they’re not holding us hostage,” said Gross. “We have to focus on the right products and always evolve to the next thing for the consumer, who is very knowledgeable.”

Creating several brands that serve various tiers for the major stores is also the strategy for Los Angeles-based See Thru Soul, a denim line targeting a better junior customer, with contemporary styling. Priced to retail for $68 to $128, the line gives juniors’ departments access to contemporary looks in washes and details, at prices that are higher than typical juniors’ lines, but lower than premium denim.

See Thru Soul is one of several brands owned by Swat/Fame Inc., which also produces Speechless, a moderate women’s and children’s sportswear and dress line, and is a licensee for LEI children’s denim. The company is developing two denim brands — one contemporary and one moderate to launch for spring 2006 — that will target separate department store tiers.

The multibrand strategy is in sync with the way retailing will evolve, once the dust settles after all the consolidation, according to Mitchell Quaranta, president.

“Retailers will differentiate themselves more than in the past and require vendors to adhere to their strategies,” he said. “Nordstrom will try to separate itself from J.C. Penney and then go after brands that fit in with its image.”

See Thru Soul sells to better specialty stores, including Nordstrom and Rampage, while the new denim lines will target more moderate stores.

“Better department stores don’t want moderate brands, so with See Thru Soul, we’ll stay true to distribution, without bastardizing the line,” he said. “At the same time, we’ll create brands that find a niche in moderate stores and stay true to that niche.”

Launched a year ago, Anoname went after the major stores — Federated, Dillard’s, Nordstrom — right off the bat. Melissa Hodgson, president of sales and merchandising, began her career at Juicy Couture in 1993. She had cultivated relationships and knew about brand building.

Sensing the need for the look of premium denim at a lower price, Hodgson created a novelty, girlish, vintage-inspired line called Anoname, with the slogan “individual style knows no name.” At $79 to $98 retail, the new price point fit into an area she called “status” denim.

“We own our warehouses and factories [in China], and we cut for Guess, Seven and other premium lines, so we can create the same quality, the same looks,” Hodgson said. “We figured if we sell a jean at $98, the customer can buy two.”

The line has grown from a small corner in four Federated doors to a bigger presentation in 28 units, along with Nordstrom East and West and Dillard’s.

Sales in one month — March to April — reached $3 million, said Hodgson, who will add a line of tops to go with the jeans in June.

Hodgson said department stores want product that is increasingly differentiated from other stores. To satisfy their needs, and to reach out to as many chains as possible in a shrinking retail scene, a denim line has to offer multiple groups, a variety of looks and new samples every month, she said. To open up distribution in stores such as Penney’s and Stage Stores, the company will launch a junior line, Fairy Jeans, at $59 to $69 retail, in June.

Building name recognition is vital in today’s denim world, so Hodgson hired a public relations firm, sent out 500 free pairs of jeans to celebrities, and met with publicists, hoping for coveted photographs in magazines.

While all the elements came together for Hodgson, getting space in department stores is a daunting task, especially in high-end stores, where competition is fierce.

“I called on Bloomingdale’s for a year before I got an appointment,” she said, adding that cultivating high-end specialty stores, such as Scoop and Intermix, takes constant vigilance. “I go there all the time, wearing my jeans, getting to know the salespeople, making friends, hoping they’ll pass the word on to buyers.”

The status price range was also key for Little Big Jeans, a line from Turkey that bowed in the U.S. in 2003. Department stores, overloaded with higher-priced jeans, were attracted to the quality and styling of the line, at prices of $88 and $98, said Billie Yagen, vice president of sales and marketing at the New York-based U.S. operation.

Selling to Federated, Nordstrom and Dillard’s, Little Big Jeans just launched Little Big Limited Edition in May to target higher-end stores. At $135 retail, the line uses Italian fabrics and buttons, various washes and a slightly higher rise for an older, more sophisticated customer. A new stretch group, at $78 retail, will launch in July for younger customers, in time for back-to-school.

Doing business with big retailers today is a struggle for space, presentation and signage, said Yagen, who said Little Big’s store in New York’s SoHo neighborhood offers control over the brand’s image and presentation. Five more stores, on the West Coast and in Florida, are planned in the next few years. Retailers’ demands, along with their ability to apply chargebacks and markdown money, mean that manufacturers have to constantly monitor their business, she said.

“You can’t sell it, ship it and forget it to department stores,” she said. “We check stores all the time and pull a style that isn’t performing, rather than have markdowns.”

Her team also monitors how the line’s department store performance varies by region.

When planning distribution strategy, denim brands need to create “balanced portfolios,” with a mix of specialty and department stores, according to Don Kerkes, president of Indigo Palms, a Seattle-based premium denim line owned by Oxford Industries.

The brand, launched 17 months ago, has 80 percent of its distribution in specialty stores and 20 percent in department stores.

“Specialty stores are brand-builders,” Kerkes said. “Retail consolidation makes for fewer companies in the department store arena, and we are also very selective.”

Selective means high-end chains, including Nordstrom, Bloomingdale’s, Parisian and Lord & Taylor, a division of May Co. Kerkes said the line is carried only in selected L&T units and shouldn’t be impacted by the acquisition.

To convince department stores to buy one more premium denim line, Indigo Palms targets contemporary styling with a generous fit for 30- to 50-year-old women, an area that Kerkes said is now gaining momentum at retail.

“It’s a new segment, and it’s about to explode,” he said. “In the last few months, retailers are more aggressive in this area, realizing that they’ve missed out on this customer.”

As another way to balance its portfolio, Indigo Palms has four stores of its own — two in California, one in Las Vegas and one in Florida — and plans six to eight more units in the next two years.

Being both retailer and wholesaler was part of the founding strategy in 1995 for Los Angeles-based Earl Jeans, which opened its first retail store in 2000. Earl now has four full-price stores, in New York, Miami, Los Angeles and London. Three outlet stores, one in England and two in the U.S., help keep excess inventory from showing up in discount stores. Priced from $140 to $225, Earl sells to Neiman Marcus, Saks Fifth Avenue, Bergdorf Goodman and selected Federated stores.

Operating its own stores gives control of floor space and presentation in the crowded denim field, where many lines are vying for space in department stores.

Steve Birkhold, president of Earl Jeans, which was bought by V.F. Corp. in 2003, said vendors are feeling more pressure from the increased number of lines than from the consolidation at retail.

“The way to have longevity is be consistent, not the jean of the month,” he said. “We’re classy, understated cool, not overprocessed or -detailed, and that’s what’s kept us around for 10 years.”

For Seven For All Mankind, an established premium player, name recognition and a planned expansion — facilitated by a new partnership — are a good hedge against whatever happens at retail.

The Los Angeles-based line, which sold 50 percent of its business to Bear Stearns in March, will grow the brand by opening its own stores, launching children’s and men’s divisions and expanding into European markets. With retail prices ranging from $132 to $209, a new embellished denim collection, The Great China Wall, premieres this summer at $295 to $1,000.

At these prices, Seven will continue to sell to luxury stores only, including Saks, Bloomingdale’s, Barney’s, Scoop and Intermix.

“We’re unaffected by consolidation at retail, and we don’t need to go out to find stores,” said a spokeswoman. “It’s more important to us to protect the brand and image, and the fastest way to ruin that is to put the line where it doesn’t belong.”