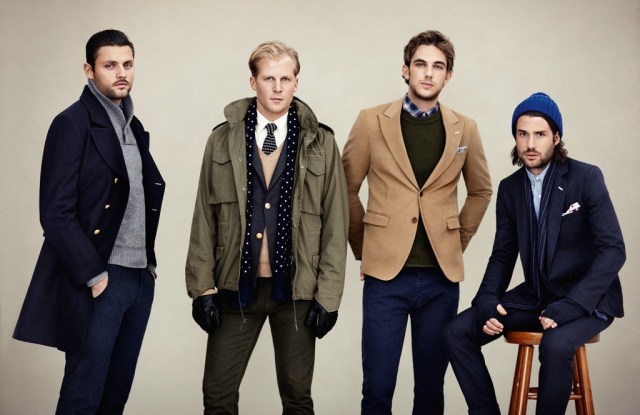 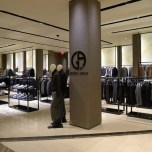 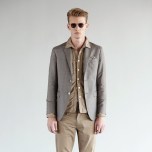 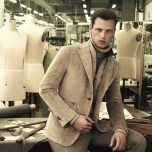 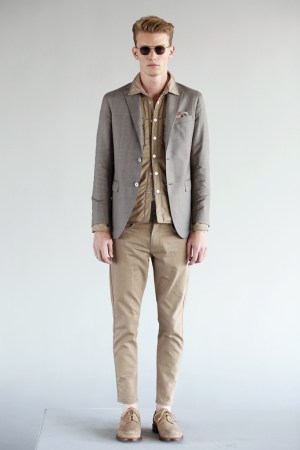 J. Lindeberg sales are split evenly between sportswear and clothing.

The unifications allow shoppers to find the entire world of each brand in a single showcase — and is indicative of a larger evolution at retail, which has seen a continual blurring of the lines between the previously distinct sportswear and tailored clothing categories. Increasingly, sportswear companies are boosting their tailored offerings and traditional tailored clothing brands are moving aggressively into sportswear. At the same time, some sport coat designs are becoming more casual, fashioned from cozy fabrics like knit jersey or gussied up with military details and outerwear flourishes.

“We don’t have a suit department and we don’t have a sportswear department anymore. Giorgio Armani and Ralph Lauren were the last two major players we combined into single shops,” said Eric Jennings, men’s fashion director at Saks. “Men have so many more options in the way they dress today. It’s much more fluid. No one can predict what corporate casual means when they get a job. You can wear jeans with a sport coat or a suit with no tie or a knit jacket that looks like a sport coat but feels like a sweater or a cardigan with a tie. Men want to have all those components available to them when they shop.”

This sea change has meant that influential stores like Saks have altered their buying structures so that a single buyer can buy sportswear, tailored clothing and furnishings from the brands they work with. “We still have divisional merchandise managers for sportswear and clothing, but for certain brands the buyer will buy head-to-toe product from all those different categories, to make sure they all work back together,” explained Jennings.

In March, Barneys New York took the major step of remerchandising its Madison Avenue flagship and moved the sportswear offerings from five key vendors — Ermenegildo Zegna, Brioni, Kiton, Isaia and Andrea Campagna — from the ground floor up to the seventh floor, which housed the suits from each of those brands. Shoppers can now browse both sportswear and clothing from those five influential Italian resources on a single floor.

“We rebranded the traditional clothing area into a luxury wardrobe area,” explained Tom Kalenderian, executive vice president and general merchandise manager of men’s wear at Barneys. “We did this with the purpose of providing one view of all the offerings from these particular brands. Before, in tailored it was customarily all about an authoritative presentation of sleeves. But we challenged our team to find a new way to offer a comprehensive experience at one time.”

The consolidated presentation allows shoppers to easily mix and match tailored and sportswear items, as they do in everyday life. “There [are] more opportunities at your fingertips now and it facilitates the shopping experience. If you’re buying a beautiful cashmere blazer, why not match it with a five-pocket twill pant and a cashmere zip mock pullover,” pointed out Kalenderian. “Now, we have clothing specialists selling sportswear and sportswear people selling clothing. It’s exciting and it’s modern.”

The melding of sportswear and tailored clothing means companies that once focused on one or the other have expanded their offerings to encompass both, as does Hugo Boss. Tailored clothing stalwarts like Zegna, Canali, Isaia, Kiton and Corneliani have turned to sportswear for growth, particularly as the casual workplace put a damper on conventional suit sales.

Conversely, tailored pieces have become key elements in the collections of sportswear brands. Casual lines like Ben Sherman, Original Penguin and Victorinox all incorporate tailored offerings. Even denim makers like Acne, Diesel and G-Star have followed suit, so to speak.

“Casual Friday took a big bite out of the clothing business and that must have been the single most effective action that motivated clothing brands to become total look concepts. Almost every brand today wants to offer a full lifestyle message,” said Kalenderian.

He praised Zegna for its evolution over the years from a fabric manufacturer and clothing maker into a full lifestyle brand. “They are an important role model in this industry,” said Kalenderian. “There’s a taste level and consistency to the way they articulate off-duty attire versus clothes for the workplace. They have executed expansion into more categories very consistently.”

Going in the opposite direction, Brunello Cucinelli, whose history and forte is in luxury knitwear, has made a splash with suits in recent seasons and Barneys picked up the tailored offerings this fall. Similarly, Michael Bastian, known for American sportswear, earlier this spring launched an exclusive line of workplace suits for Barneys.

At Corneliani, sportswear has grown to 25 to 30 percent of the overall business, concentrated in its younger, trendier Corneliani ID label. “We realized there was a real casualization going on and people no longer have to wear a suit to work every day. With ID, there’s a real melding together of tailored and sportswear, sophisticated with casual,” said Roger Cohen, president and chief operating officer of Corneliani USA. “It’s brought in a younger minds-et to the brand.”

That means ID offers sport coats with zipper and military details, cashmere half-zip pullovers and stretch flannel pants. “There’s a real fashion attitude but you can still wear it to work,” said Cohen. “There’s a lot of crossover and it all hangs together with the suits. I see my contemporaries coming into the office less buttoned up and they’re experimenting. It makes the consumer want to go shopping.”

Transforming from a strictly tailored clothing resource into sportswear has been a key priority of the past few years for Naples, Italy-based Isaia. Sportswear has grown to 18 percent of sales, up from just 2 percent three years ago. James Shay, president of the Isaia business in the Americas, is aiming to grow it to 50 percent of the business within three to five years. “It’s been a major initiative for us to develop the lifestyle component. You want to be a lifestyle and take advantage of the existing goodwill towards the brand,” said Shay.

That evolution has its difficulties. “The biggest challenge is to get the entire organization to think like a sportswear brand and not just a clothing brand,” said Shay. “Even the simplest things like the number of samples we have to produce with sportswear. A clothing buyer will buy off a fabric swatch, whereas a sportswear buyer will not and we have to make all the sportswear samples. We own our clothing factories but we don’t own sportswear factories, so we are like a small vendor when we work with those factories.”

At Nordstrom, Tommy Fazio, men’s trend director, pointed to collection brands like Billy Reid and Todd Snyder as standouts in offering cohesive tailored clothing programs. Conversely, Hickey Freeman and Joseph Abboud are making strong inroads with sportswear offerings that complement their core tailored clothing business at the department store. “It gives your customer a way to stay with your brand rather than shopping other brands,” said Fazio.

Karen Murray, president of VF Corp.’s sportswear coalition, which includes Nautica, pointed out that the merging of tailored and sportswear mimics longtime practices in women’s wear. “Women have been dressing this way for years. I’ve been taking my jackets and pants from different suits and mixing them with sportswear or sweaters or jeans for years,” she noted.

Nautica offers tailored clothing through its licensee Levy Group but also makes its own sport coats for its collection sportswear shops in department stores. Unlike the consolidations at Saks and Barneys, the licensed tailored clothing from Nautica is carried only in the suit departments of retailers like Macy’s. The suits cannot be sold in Nautica collection shops in those stores.

“We can’t mix and match in the stores because open-to-buys aren’t structured that way currently. If it’s suits from Levy, it has to be billed and accounted for in the tailored clothing department and shipped a certain way to them. It’s logistics and red tape,” said Murray of the setup.

At Bloomingdale’s the men’s floor is laid out increasingly by lifestyle rather than classification. “We are merchandising tailored clothing and sportswear more and more together, whether you are shopping at the Canali shop or the Burberry London shop. We brought Hardy Amies in for this fall and we bought both the tailored and sportswear and it was all bought by a single buyer. The majority of our brands are now lifestyle and house tailored and sportswear together,” said Kevin Harter, vice president for men’s fashion direction at Bloomingdale’s, a unit of Macy’s Inc.

Ironically, casualization of the workplace has given the sport jacket an increasingly important role in both clothing and sportswear lines, as it’s an easy way to dress up an outfit. “The tailored jacket has become such an essential piece of a man’s wardrobe. It hides a lot of flaws, it’s a safe bet and you can whip it on and off,” said Harter. “It’s been a significant growth category for us.”

At J. Lindeberg, tailored clothing has grown to 50 percent of the overall business — a big evolution for a brand that started life as a golf line. In November, the company will add a made-to-measure tailoring service to its New York store. “Our brand DNA has been to mix the technical with the tailored,” explained Stefan Engström, chief executive officer of the Stockholm-based company.

Tailored offerings from sportswear brands can be appealing to younger consumers because they aren’t sold in a sea of similar-looking garments in tailored clothing departments, said David Arbuthnot, ceo of Gant USA. “You’re not walking into a suiting department facing 1,200 charcoal suits staring at you,” he noted.

Blazers are a key item in Gant’s sportswear offerings and tailored items comprise about 20 percent of total brand sales in the U.S. “It has grown significantly in the past few years,” said Arbuthnot. “It’s an important cornerstone of our business because it’s among the highest price-point items we have in our stores. And without tailoring, it would be a less interesting shopping experience, so it’s a win-win for us.”