At the recent fall-winter Tranoï and Capsule men’s trade shows, it was apparent that designers had taken creative risks. 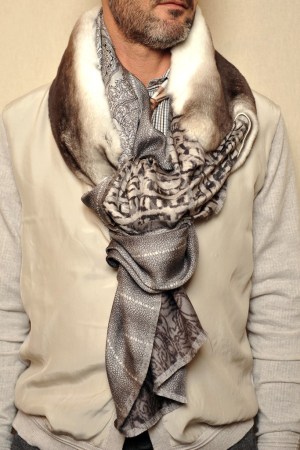 PARIS — The response to the European economic crisis for many ready-to-wear and accessory designers is a no-brainer: creativity and risk — at the right price.

That was showcased at the recent fall-winter Tranoï and Capsule men’s trade shows here, where oranges and dark winter greens, experiments with mixed materials, handcrafted clothing and a focus on natural, locally produced fabrics, including luxury furs, were among the indicators that designers were going for bold gestures.

“If designers are taking risks with forest green [a color harder to sell in stores], and using fur, which is expensive, it means they believe in what they’re doing and want to make a strong statement,” said Gerald Tesson, men’s stylist at Le Bon Marché.

Like other retailers, the luxury Paris store was searching for just that: “We assume Mr. and Mrs. Everybody already have everything they need. So our job is to create desire.…We’re not afraid of color and newness,” Tesson said.

Armand Hadida, artistic director of Tranoï, said despite economic concerns, exhibitors could afford creative risks. “As soon as we get into products that are creative, high-end, well-selected, I think those products [are affected by] the crisis less,” he said.

Other trends included an ever-expanding accessories selection, with mixes of leather, tweed, flannel and fur. Geometric patterns on scarves and dashes of color on hats were also strong, along with high-gauge sweaters thickened with various linings to be worn more like coats; building on a prevalent theme of the traveling man dressed in local, naturally sourced fabrics.

That trend was pushed to its raw, woolly limits at both shows, though it was more widespread at Capsule, which was focused more on casual, British-themed brands.

One could practically smell the farm at the one-year-old Bergfabel collection by Klaus Plank at Tranoï, exemplifying a yearning for a locally made, rustic vintage feel, plus a modern slant suitable for urbanwear.

Inspired by a childhood spent in the farms of Italy’s Dolomite Mountains, Plank even looped in his 73-year-old mother to knit the same wool socks he wore as a child. “When you’re far away from home, you realize what you’ve had all along: good food, a big family — very natural,” he said.

Most brands kept prices stable for buyers who were especially careful about cost, but felt at the mercy of changing currency values.

Attendance was up 10 percent at Capsule, and 20 percent at Tranoï, despite exhibitor concerns it felt emptier than usual. Buyers from South Korea, and Asia overall, were increasing orders, and most newer brands said growth was consistently strong in 2011, despite a warm winter. Still, several buyers said they were lowering budgets by a rough average of 10 to 20 percent, and wanted “something precious” for a balanced price. A few said they would go light on heavy coats, following this year’s endless fall temperatures.

“The industry has had a tough time this winter, especially with men, who if it’s not cold, just won’t go out and buy a coat. It seems trivial, but it’s not,” said Alexia Hentsch, designer for the Hentsch Man collection.