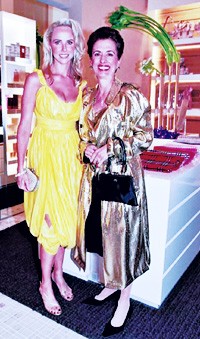 And considering the fan entourage — from young, cooing socialites to former fellow executives — flocking to her side, she might as well have been one. The city’s social set — including Denise Hale, Soledad Thieriot, Kimberly Bini, Christina Dunning and Gabriella Sarlo — was there for the event, co-hosted by Vanessa Getty and benefiting The Shelter at Pets Unlimited, her charity. Macy’s West chairman and chief executive Bob Mettler, as well as former Macy’s chief (and Bravo’s mentor) Ed Finkelstein turned out, as did a legion of former co-workers.

“It’s always so nice to see my kids,” said Bravo as she and Burberry chairman John Peace were driven over to the post-party dinner at Postrio, also hosted by Getty, along with Getty’s husband, Bill, and two dozen of their pals, including Third Eye Blind’s Stephan Jenkins, novelist Melanie Ellison and film producer Jason Blum.

It was a decidedly different scene from the evening before in the state’s southern end, when more than 150 supporters of the Costume Council of the Los Angeles County Museum of Art honored Bravo with its first Legend Award. “We don’t even mind that she brought the London weather with her,” gushed member Joanie Smith, a friend of Bravo’s for some 30 years. The black-tie gala involved more dancing to a big band than dining. Bravo’s parents, Biagio and Anna La Pila, and aunt and uncle, Edie and Patricia Bazzano, soaked up every proud moment as Bravo accepted the glass sculpture trophy.

It was already a long day for the family. For the Costume Council’s wider membership, Bravo told the audience of more than 500 at LACMA’s Bing Theater the storied history of Burberry, showed them the first presentation on video of the Spring 2005 Milan Prorsum show, and followed that with a traditional English tea. — R.A.J.

This story first appeared in the October 26, 2004 issue of WWD. Subscribe Today.