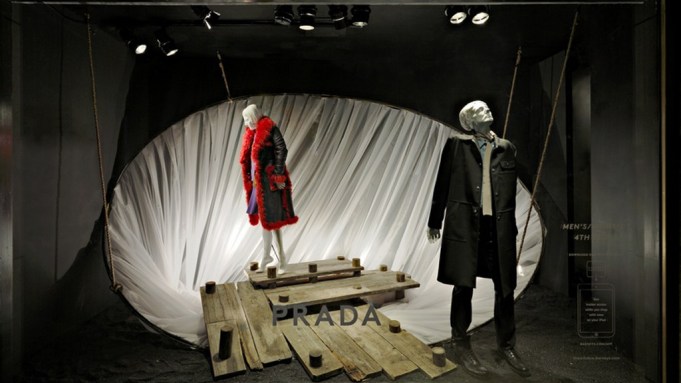 Relationships — you never know. Sometimes a trial separation turns final — what did you ever see in each other? — and sometimes, you realize you’re better together than apart. The latter is proving true for Barneys New York and Prada.

In the solitude of an early Sunday-morning stroll down Madison Avenue, the words leapt from the glass on the southwest corner of 61st at Madison: “Prada Men’s/Women’s 4th Floor.”

The ultracool, ultrachic retailer and the beyond-cool, beyond-chic fashion house are back on after a three-year hiatus, their reconciliation trumpeted by a bold, artful (of course) all-Prada window installation at the store’s Madison Avenue flagship. Deep and provocative with their arcane reference to German experimental theater; cast-in-plaster takes on humanity; odd theatrical stage sets, head-scratching (to most of us) German soundtrack, and, most importantly, glorious fashion, the windows flag that this is a union of like-minded purveyors of fashion. They also herald the installation of airy, adjacent women’s and men’s shops on the flagship’s renovated fourth floor.

To be exact, the Prada-Barneys schism was never absolute; Barneys retained the full men’s collection, which was housed in a spacious second-floor shop, and a selection of women’s shoes. But the big fish, women’s ready-to-wear, was pulled following something other than an artistic difference: Prada wanted to lease its brand shop within the store; Barneys said, “thank you, no, we don’t do that.” Whether each was calling the other’s bluff — who knows? The result was that Barneys has not carried Prada women’s clothes since 2011. Until now.

Watch a Video Preview of the Prada Installation Here >>

“You don’t need me to tell you that Prada is without a doubt one of the most important designers in the world,” said Barneys chief executive officer Mark Lee. “Obviously, we survived [without Prada women’s rtw]. But if I close my eyes and think about the five or 10 brands most important to the history of Barneys, and most synonymous with what Barneys stands for and with Barneys’ aesthetic, Prada is on that short list. We have things in common in terms of modernity, so it’s great for us to have that back.” The new women’s range does not include handbags, nor are there plans to do so in the foreseeable future.

Lee noted that the decision by Prada to pull its women’s collection occurred before his arrival at the store late in 2010. He never considered the relationship ruptured and continued to attend all of Prada’s shows in addition to the requisite men’s meetings, so “it’s not like [Patrizio Bertelli] didn’t see us around.” He maintains that this latest initiative grew out of ongoing conversations coupled with the possibilities created by the store’s massive renovation.

The new two-into-one Prada shop concept positions the women’s and men’s areas at the closest point possible to the connecting passage between the larger men’s and women’s stores. They thus flow into each other. The spacious shops feature white walls, chrome fixtures and Fasce Cromate sofas designed by Luigi Caccia Dominioni for Azucena. The merchandise is pre-fall and the beginnings of fall.

“I can’t speak for Patrizio Bertelli,” Lee said. “I’d like to think that all the work the Barneys team has done over the last few years in terms of clarifying our position as a specialty store [has resonated]. The interesting things we’ve been doing as far as merchandising with the renovations, and with marketing and communications — I’d like to believe all of that has enticed him. I mean, why wouldn’t Prada want to be here? We have all the best brands in the world. It’s an anomaly not to have this really forward, modern brand.”

Bertelli noted that Prada and Barneys “share a very special history,” and the time seemed right to move forward with women’s. “We strongly believe in this renewed partnership because Prada and Barneys are sharing the same vision from an aesthetic and commercial point of view,” he said.

The move plays as a testament to the wisely curated specialty retailer — both Barneys specifically and the genre — in this age of verticalization and e-commerce, particularly since a Prada devotee shopping at Barneys need travel only a brief 10 blocks north to hit the nearest brand store.

Barneys remains New York’s primary temple of modernist chic, that reputation remarkably constant despite the emergence through the years of smaller competitive outposts such as Jeffrey and Opening Ceremony, as well as the ongoing competition from Bergdorf Goodman, which has upped its cool factor without loosing its identity; Saks Fifth Avenue, now working through a new ownership-driven transformation, and, most recently, Lord & Taylor, which this week revealed plans to get in on the young-designer stakes. (Bergdorf’s and Jeffrey carry Prada across categories; Saks, Prada accessories and shoes. Those three and Lord & Taylor carry fragrance and eyewear.)

Trust in Barneys, its taste level and execution clearly played a role in Prada’s expanded presence, as the brand’s shops within the store are not leases and the creative calls have been Barneys. “It was our vision,” Lee said. “I presented the idea of how the location could be — the men’s on the men’s side, the women’s on the women’s and the connection through. They accepted and trusted that idea. We didn’t get deeply involved [in discussing] fixturing. They understood it would be our template. We understand that Prada puts a high degree of emphasis on visual display. We wanted it to be really well-appointed. And well-finished in terms of every detail.”

The Barneys camp understands as well, that while Miuccia Prada’s primary motivation is always to create fashion, her path to that end is informed by a hyper-artistic eye and an intellectual rigor that have kept her work at the pinnacle of progressive fashion for 20-or-so years. Prada’s fall collections were inspired by German avant-garde culture of the 20th century, including obsessive viewing of Rainer Werner Fassbinder films.

Which circles back to those windows. “We took our inspiration from Miuccia. The German avant-garde was our starting point,” said Barneys creative director Dennis Freedman. “But we wanted to take that and make it our own.”

Freedman and his team did so by creating windows grounded in a dark, theatrical sensibility. His primary inspiration: Tadeusz Kantor, “one of the most extraordinary and overlooked theater directors, set designers, painters of the 20th century” — whom Freedman discovered while on a shoot for W magazine with Deborah Turbeville in 1997. Kantor’s sets captivated Freedman, and felt in line with those artists who had inspired Prada. In addition, Freedman wanted to introduce an American connection, and so referenced Merce Cunningham and Philip Glass, among others.

The windows’ props are raw and demonstrative, whether a huge, rough wooden bed erupting with thick, dangerous spikes, or a curved plywood stairway extending into infinity. These elements serve as sets for the mysterious characters, each window featuring a woman and a man in arch, theatrical positions. The figures are cast in resin, including their Bob Racine wigs, the pale pastiness in contrast to the women’s clothes in moody shades of purple and berry. From afar, that’s all one sees. But nose-to-glass, a different perspective emerges. The figures are body casts of real people, one woman and two men, one of the men a dancer. The human detail is remarkable — the strands of hair, the woman’s nasal-labial lines, the crinkling skin of her hands — eerie in its white paste take on real life. Heightening the mood: the soundtrack of remixed dialogue from Fassbinder’s “Katzelmacher.”

In each case, the man and woman, obviously aware of the other, avoid contact, both physical and visual. “It’s about a distance, a darkness between them,” Freedman said.

It’s also about what fashion can and should be, at least some of the time. Increasingly, current big-brand fashion attempts to be, if not all-things-to-all-people, then all-things-to-all-rich-people. Along the way, something is lost.

That something is provocation, whether emotional or intellectual. With their convergence of non-specific references, these windows make you think. I saw “Afternoon of a Faun” in one; Freedman said Vaslav Nijinsky wasn’t on his mind but now that I mentioned it…

He may have been humoring me on the eve of writing a story about his latest work, but so what? Even when we reduce genuine deep thoughts to fashion deep thoughts, it’s still stimulating, engaging and fun to discuss and debate. In this case, the deep-thoughts windows beckon viewers in and up to the fourth floor, where they’ll come upon some of the very best fashion has to offer — clothes that offer a powerful fusion of beautiful and interesting.