Gift shopping hasn’t materialized the way retailers had hoped, which for many stores is running flat to a couple of points ahead. 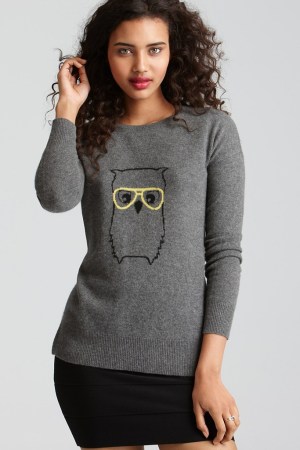 It really hasn’t materialized the way retailers had hoped at this point in the holiday season, which for many stores is running flat to a couple of points ahead, leaving executives anxious and more dependent than usual on the last 10 days of the season to meet their goals.

Even in a lackluster season there are always some positive fashion trends and bestsellers, and this year they include boots; cashmere sweaters with novelty design; embellishments; skinny, distressed jeans; jewelry, and watches. Products that seem out of the ordinary, exclusive, well-priced or lower than last year, and wearable beyond the holiday season are selling, rather than the old holiday standbys like red party dresses, coats, gloves and reindeer-themed sportswear and knits.

Shoppers are buying more pragmatically, using mobile and online to compare prices, and are more often in consultation with those they’re shopping for. As Erik Searles, vice president of retail for Oakley, pointed out, “Consumers are buying for themselves still. We had a pretty good spike on Black Friday, where shoppers were looking for value and not necessarily for themselves, but the gift shopping turned off and the week after, there was a little bit of a lull.”

He added that there’s been “no resistance” to Oakley’s new high-performance $700 Airwave Goggle, which has GPS, Bluetooth and interchangeable lens technology, and which people are generally buying for themselves rather than as gifts. “High price points are tracking. It’s the typical run of the mill goods that aren’t,” Searles said. “From an apparel perspective, we have begun to see solid sales in high-performance snow and technical outerwear, in men’s and women’s. The price points are high but the customer seems to be betting on a good snow season. Customers want exclusivity. From our perspective, they don’t want the same products. It’s all about newness and products that are very performance-driven and sports-driven.”

“Technology is being incorporated into traditional apparel/accessories, for example — technology-enhanced apparel,” said Mortimer Singer, chief executive officer of Marvin Traub Associates, citing some key trends of the season. “Men’s apparel continues to be more fashion forward and tailored. In particular, bespoke suiting at accessible price points. There is also a renewed importance in color across categories including home. And accessories continue to be key online and in store.”

“It’s a combination of self-purchasing and gift giving,” said Kevin McLaughlin, chief creative officer and cofounder of J. McLaughlin, describing the shopping pattern at his stores this season so far. “There are some folks shopping now to relieve the stress” of a last-minute rush for gifts.

“If you look at our stores, the attitudes of our associates and the way we have planned for the season, I feel good about the balance of the season,” said Bloomingdale’s chairman and ceo Michael Gould. “We’ll see where it turns.” He said there’s be an excellent response to Gucci products recently launched at the store.

Other executives interviewed over the last few days sounded more uncertain about business, describing it as sporadic, or in the doldrums since the Black Friday weekend. They expect business to start accelerating late this week, and are counting on the calendar to work in their favor. Christmas falls on a Tuesday this year, meaning there is a full weekend for business before the holiday, whereas last year, Christmas was on a Sunday, so most of the weekend was lost. There are also 34 days between Thanksgiving and Christmas this year versus 32 in 2011. Business on Christmas Eve tends to slow dramatically after 2 p.m.

“This year’s calendar will have a huge impact,” said one ceo of a national chain who requested anonymity. “People know intuitively they’ve got more time to shop.”

“While Tuesday is the best possible day for a Christmas to fall on, the extra days reduce the sense of urgency ahead of time,” said one ceo of a moderate chain, who is hoping the weather turns cold for a sustained period to lift sales of sweaters, coats, gloves and hats. “They’re not happening so much. It’s a big disappointment.”

“The long post-Black Friday lull continues, although this weekend was sequentially up from the Dec. 1 weekend, but barely up versus last year,” observed Craig Johnson, president of Customer Growth Partners. “In fact, this is a longer lull than 2007, which similarly had an earliest-possible Nov. 22 Thanksgiving.

Johnson added that foot traffic is up slightly versus last year, but conversion rates are down. He also said that full-price sell-throughs are down, and units per transaction are flat or down at most retailers. In terms of fashion, consumers are more interested in value than luxe, he added. “This is an embellished holiday, with sparkles and sequins in sweaters, lots of crochet and lace, and studs, sequins and other ornamentation on boots, flats and other footwear. Color reigns throughout, with pastels and neons in bottoms, and jewel tones in tops.”

Retailers have responded to sluggish trends by adding promotions and intensifying advertising. In some cases, they are delaying promotions to coincide with the last 10 to 14 days before Christmas, and consumers are well aware that retailers, in the final stretch before the holiday, will drop prices, intensify promotions and extend store hours. Macy’s already unveiled round-the-clock hours on the last weekend before Christmas at the vast majority of its stores, while J.C. Penney deviated from its everyday-low-pricing model by staging a friends-and-family sale last weekend.

At Bloomingdale’s for holiday, bestsellers include cashmeres; the Moncler down quilted jacket, and distressed denim. “It’s the antithesis of the colored denims of the past,” said Stephanie Solomon, vice president of fashion direction. “Suddenly, it’s washed, faded, ripped and torn. It’s very cool denim.”

Baxter noted that more affordable gifts are arriving at the store next week for the last 10 days before the holiday, in groups priced under $100, $50 and $25 to make shopping easier.

McLaughlin said, for holiday, the company “took a pass on the heavy holiday dress-up merchandise. It’s been a loser, historically. The window to sell it is from mid-November to some point in December and then it’s over. So we took a decided sportswear approach,” with such items as printed velvet jeans and tailored metallic shirts. “It makes more sense to the customer, and we have a longer selling season.” McLaughlin also senses that this holiday season is more about gatherings at home, with friends and family, rather than a night out on the town.

“Holiday is not an easy season,” McLaughlin said. “It’s very specific in its use. I don’t think people are prepared to spend a lot of money on something with limited usage. We made a specific effort to try to get resort front and center. Customers feel much better spending full price on items that have legs going forward.”

J. McLaughlin doesn’t break price until after Christmas, unlike most stores. “It’s a little bit lonely in the full-price world, so we better offer a lot of value and service. It’s easier to do that by looking forward with resort merchandise.” Reports from different Taubman Centers also indicated consumers continuing to shop for themselves, more so than gifts. Stores at The Mall at Short Hills in New Jersey were up midsingle digits on average on Saturday and last week overall. Hot categories have been apparel, jewelry, electronics and accessories, with self-purchasing still strong on sale items. Taubman’s International Plaza in Tampa, Fla., reported stores trending flat to up low-single digits for Saturday and the week overall, with fashion boots, apparel, electronics, beauty, and home decor selling best last week, with designer goods and jewelry strong on Saturday. Stores in the Northlake Mall in Charlotte, N.C., were also flat last week on average, while The Shops at Willow Bend in Plano, Tex., said stores were trending up in the low-single digits for last week.

“What’s really different about Christmas this year is that it’s less about putting a list of 10 Christmas gift items together and putting those surprises under the Christmas tree,” said Harry Slatkin, ceo of luxury brand Belstaff, who said the Belstaff store on Madison and 68th Street in New York is beating its plan. “Men and women, wives and their husbands, are coming in knowing what they really want. They want to buy something that they will really love. Something that’s pertinent.”