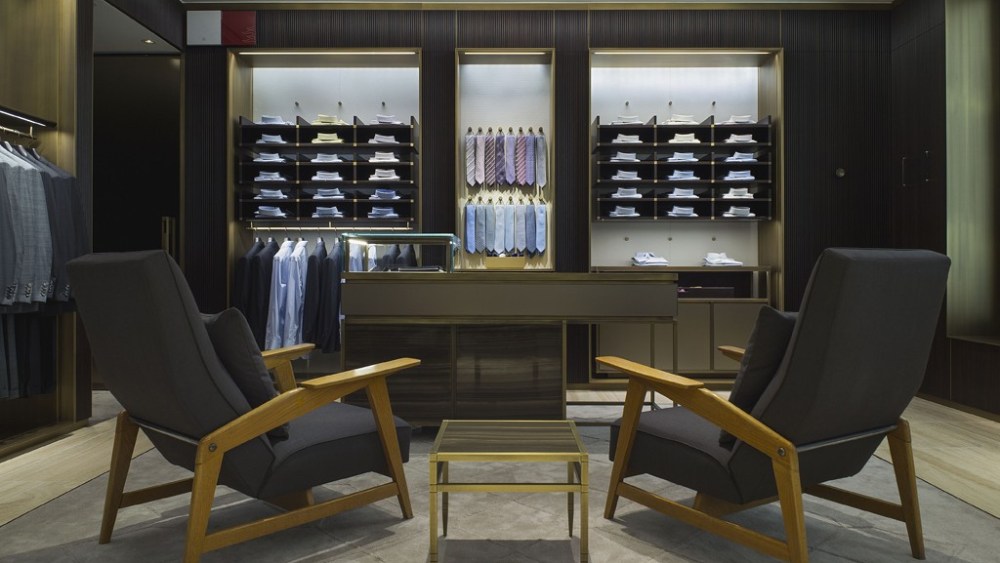 MILAN — Brioni’s sprawling new flagship here, which will be officially unveiled during men’s fashion week, is being touted as “the most important in the world,” according to chief executive officer Francesco Pesci.

At a cocktail event to be held on Saturday, the company will present the first phase of a major three-pronged digital project that will be completed in 2017 — one that is being viewed as providing the ultimate in service to customers.

“Milan has a particular meaning for Brioni and is fundamental in our distribution strategy — it’s the fashion capital,” explained Pesci. The boutique replaces a former smaller venue on Via Gesù, off Via Montenapoleone, which opened in 1998.

As one of the company’s priorities is to expand its retail network, Brioni has developed a new store concept “consistent with the values of the brand, its timeless elegance and continuous commitment to respect the artisanal Made in Italy craftsmanship and the utmost quality,” Pesci said.

To that end, the connection with Brioni’s origins and history is pivotal to the store, one where customers should “feel at ease, in a welcoming, embracing and friendly atmosphere — a comfort synonymous with the brand and a luxury that is not intimidating or ostentatious. An Italian brand can’t be cold — you must be able to feel its human warmth and passion,” he said.

Accordingly, four main elements were used to provide consistency and harmony, said Pesci: Travertino, a stone that has always been much used in Rome, and which harkens back to the origins of the brand that was founded in the Italian capital in 1945; Bahia wood; canneté panels, and Eramosa marble on the display tables paired with bronzed brass inserts, in continuity with the previous store concept.

“With this opening, we bring our contribution to the efforts made to relaunch Milan as a luxury window in textiles and apparel,” said Pesci, who declined to provide details about the financial investment, but said the store was “a very important step. We have high expectations.”

Located in an 18th-century neoclassic private residence, the flagship covers almost 13,000 square feet over the ground, first and second floors. Offices are on the third floor.

After openings in Hamburg, Munich, Beijing and Hong Kong, Brioni in the fall will move its headquarters in Rome from their historic site on Via Barberini to Via del Babuino, near the Spanish Steps. “This will also be a very important venue that will show the evolution of the brand,” said Pesci.

Milan and Rome have been singled out for a highly innovative digital garment simulation project. During the official opening in Milan, the press will be offered a demonstration of the first of the three-phase venture, which will be operational at the end of September in Milan and in Rome upon the opening. It will then be rolled out in all other Brioni units in 2015. The first phase is dubbed “virtual look” followed by the “virtual wardrobe” in 2015-16 and the “virtual mirror” in 2016-17.

In the first phase, a customer can visualize a made-to-measure look in real time after choosing fabrics, ties, shirts and accessories, down to the modification of models, buttons and pockets. “I strongly wanted this program,” said Pesci. “Men are notoriously shy and one of the most frequent questions is: ‘Don’t you have a sample?’ But we have thousands of fabrics,” said the executive. “This also allows us to enrich one’s shopping experience, to stimulate and overcome mental reservations.” For example, a man may be used to wearing only pin-striped suits and will find it easier to expand his wardrobe by seeing and trying new and different variations digitally, said Pesci.

While mannequins model the suits in the images in the first and second phases, the third phase allows customers to see their own reflection in new looks in a virtual mirror. “It’s a beautiful marriage between the sartorial technique of Brioni and technology, and it is consistent with the innovation and experimentation that have always marked the brand. We are the first to do this and it is all Italian technology.”

The technology was developed by CLX Europe, which also works with Brioni’s fellow luxury firms in the Kering stable Gucci and Bottega Veneta, as well as brands from Chanel and Fendi to Ferragamo and Ermenegildo Zegna. The first phase of the project will be downloadable on laptops and other mobile devices, and will allow the company to travel with it to trunk shows, events and at customers’ homes.

While declining to provide 2013 sales figures, Pesci touted “extremely positive results, superior to average in the market,” and said he is expecting “healthy growth in 2014. All in all it will be a good year.” In particular, he cited the U.S. as “reemerging as a very strong market. It is being strongly receptive of Brioni. It is exceptional and very encouraging.”

The last sales figure available for Brioni was prior to its acquisition by Kering, when it had sales of 170 million euros, or $225.7 million at average exchange, in 2010.

Pesci also revealed that, in the fall, Brioni will launch a new product category, which will strengthen the company “as a couture house,” but remained mum on details.

For the opening, the Via Gesù boutique will feature an installation by Greek artist Michael Anastassiades — the brand’s second such project following another during the Salone del Mobile international furniture fair in April.