High-street retailers, and jobs, have been evaporating as U.K. consumers quickly switched to online shopping during the COVID-19 lockdown.

Boots plans to cut some 4,000 jobs as it restructures post-lockdown.

LONDON — Two of Britain’s best-known retailers, Boots and John Lewis, have revealed thousands of layoffs and a raft of shop closures as they look to cut overall costs and focus their resources online in the wake of COVID-19.

The retailers made their announcements less than a day after Britain’s Chancellor of the Exchequer, Rishi Sunak, outlined plans to keep people in work, via job retention bonuses for businesses that have begun to operate once again as lockdown eases.

Sunak also plans to slash value-added tax in the hospitality sector to 5 percent from 20 percent to boost restaurants, hotels, bars, pubs and theme parks, which — like retailers — are having to implement social-distancing measures, and grapple with a decline in footfall and international tourism.

The government’s promises were clearly not enough for Boots and John Lewis, both of which said they needed to cut costs immediately — and cater to the growing band of online consumers that emerged during lockdown.

Pharmacy and beauty retail chain Boots said it would be slashing 7 percent of its workforce, or more than 4,000 jobs, from its head office, stores and opticians teams. It also plans to close 48 stand-alone Boots Opticians stores.

The company said consumer behavior had changed so drastically during the coronavirus that it now needs to move quickly to reverse the downturn in brick-and-mortar sales, and to invest more in the online business. 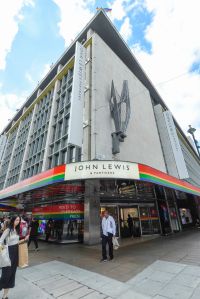 The John Lewis department store on Oxford Street will remain open despite plans to shut 8 units in the wake of the coronavirus.  Stephen Chung/LNP/Shutterstock

The company, a division of Walgreens Boots Alliance, said despite the fact that many of its stores were allowed to remain open during lockdown, “footfall into Boots stores dramatically reduced, and its revenue-driving beauty and fragrance counters were closed.”

The retailer pointed out that more than 100 larger stores in city center, station and airport locations were closed during lockdown, as were the majority of Boots Opticians practices.

“Restrictions are beginning to lift, but with an uncertain economic outlook, it is anticipated that the high street will take considerable time to recover,” said Boots, adding that COVID-19, “has also accelerated the shift by consumers towards digital channels and online shopping.”

Boots said that during lockdown it doubled the capacity of Boots.com and introduced new online pharmacy and beauty services, such as virtual consultations. The company said it is planning further investment in its online business.

Sebastian James, managing director of Boots UK, called the proposed layoffs and closures “decisive actions that will allow the company to continue its vital role as part of the U.K. health system, and ensure profitable long-term growth.”

Another British retail institution, department store chain John Lewis, confirmed Wednesday that it will not reopen eight of its stores, and is making plans to lay off about 1,300 staff.

The stores identified for closure include units at Heathrow airport and St. Pancras train station; four stand-alone home interiors units in the Midlands and the south of England, and two full-size department stores in Birmingham and Watford.

The company said it would try to find new jobs for employees at its online business or its other stores and brands, which include the upscale Waitrose supermarket chain. John Lewis and Partners operates 50 stores and one outlet across the U.K., while Waitrose has 337 stores.

John Lewis said that prior to the pandemic, the eight stores earmarked for closure were already “financially challenged,” and the pandemic only accelerated the switch from shopping in-store to online.

It said that before the virus struck, 40 percent of John Lewis’ sales were online. That figure will be closer to 60 to 70 percent of total sales for this year and next, it added.

Both John Lewis and Waitrose will continue to invest heavily in e-commerce to reflect the shift, the company said. Waitrose has already doubled its online capacity since the beginning of the pandemic, while further investment in johnlewis.com is planned.

Sharon White, chairman of the John Lewis Partnership, said the closures are necessary both for cost reasons “and to meet the needs of our customers however, and wherever, they want to shop.”

As reported, Harrods and Arcadia also plan to lay off workers as retailers across the country embark on the slow road to recovery following the easing of lockdown last month.