Brooklyn’s City Point: Mixed Use in a Major Way Downtown

Target, Century 21, Trader Joe's and Katz's Delicatessen are among the tenants coming to the project. 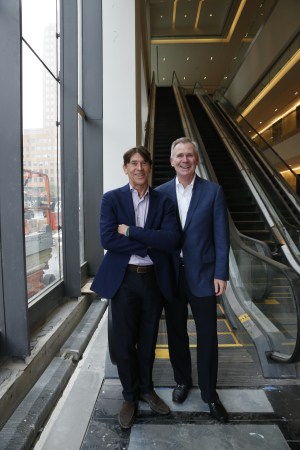 NEW YORK — Downtown Brooklyn’s spate of residential and commercial development hits a crescendo this summer with the launch of City Point and its anchor tenants.

The $1 billion, 1.2 million-square-foot City Point is what Brooklyn has lacked — a major mixed-use project encompassing retail, restaurants, a food hall, entertainment, apartments and offices. Of the total space, 675,000 square feet will be retail.

Beginning in August, City Point will open the city’s first Alamo Drafthouse movie theater/restaurant serving food and beer, a concept that originated in Austin, Tex. That will be followed in the ensuing weeks by a “flagship” Century 21 Department Store, and a Target store with a “flexible format” to fit the individual merchandise needs of the neighborhood. The store will offer, for example, smaller pack sizes, organic produce, multicultural and kosher foods and local sports teams’ apparel.

“Because this is in Brooklyn we have a lot of tenants not seen anywhere else,” said Paul Travis, managing partner of Washington Square Partners, a co-partner in City Point with Acadia Realty Trust. “It’s a very different vibe. These are not corporate food hall tenants. There’s more risk with this — and hopefully more reward.”

“We don’t use the word food court. We will have authentic New York food vendors — mom-and-pops,” said Chris Conlon, executive vice president and chief operating officer of Acadia. “Downtown Brooklyn has been missing a lot of corresponding services and amenities of a thriving neighborhood, and what it’s missing most is food.”

The 140,000-square-foot Century 21 Department Store will be one of the largest in the off-price chain’s portfolio. “That’s due to our strong belief in the downtown Brooklyn area,” said Raymond Gindi, co-chief executive officer.  “The merchandise assortment will be selected to fuel the Brooklyn lifestyle and be a part of the eclectic and energetic community. As we continue to expand, our store design concepts have evolved from some of our earlier stores with a new modern and fresh look.”

For Target, “The number of guests in this area, coupled with the new apartments and the performance of our other stores in New York is what attracted us to add a new store to downtown Brooklyn,” said Mark Schindele, senior vice president of properties. “Even though our new downtown Brooklyn Target store is a flexible format store, it’s nearly the size of a traditional Target store at 125,000 square feet. It will be a one-level store on the second floor of the City Point development, with a lot of floor-to-ceiling windows.”

City Point isn’t entirely occupied yet. There’s an 80,000-square-foot, block-long section on the main floor referred to as the Prince Street Passage. It could contain as many as 10 stores, though no tenants have been revealed yet. Another 10 stores are seen on the main floor.

“There will be a fair amount of fashion, leather goods, cosmetics, and we are seeking some pure-play retailers now getting into brick-and-mortar,” Conlon said. “There could be fashion names, national chains, great local operators, a mix of recognizable international brands, contemporary, fast fashion, relevant mass market brands that don’t have a Brooklyn urban street presence. The outlying neighborhoods themselves don’t have the foot traffic to fuel retailers.”

City Point is nestled between Flatbush Avenue and Fulton, Gold and Willoughby Streets. It’s on the site of the former enclosed Albee Square Plaza, which Acadia/Washington Square Partners purchased. “It was a hotbed of juvenile delinquents and crime,” Conlon said. “The best thing we could do was scrape it away.”

On the residential side of the development, Acadia/Washington Square Partners worked with BFC Partners to recently open a 250-unit mixed-income apartment building called 7 DeKalb Avenue. Also, air rights were sold to the Brodsky Organization, which recently opened City Tower with 440 apartments. And Extell Development is building a residential tower with 59 floors, with City Point getting the lower three floors of that building for additional retail.

“We wanted to de-risk a fair amount of the project before we put a shovel into it,” Conlon said, explaining why air rights were sold. The partners also leased the upper floors before breaking any ground, putting Alamo on five, which will hopefully be a destination having the extra benefit of giving visitors a glimpse of Century 21, on three and four, and the Target on two, as they ascend up the escalators.

City Point is expected to primarily draw visitors from Cobble Hill, Boerum, Carroll Gardens, Brooklyn Heights, Prospect Heights and, naturally, downtown. “Folks in these neighborhoods just don’t have a lot of shopping, dining or entertainment options. We have an opportunity to create a unique mix here,” Conlon said.

Adjacent to City Point are four projects under development, representing about 600,000 square feet of residential space and 400,000 square feet of office space. “If you walk three or four blocks in any direction, there is probably some new construction,” Conlon observed.

“You will see a lot more mixed use in Brooklyn over the next few years,” Travis added. “When downtown Brooklyn started to renew as an office district 20 years ago, it was heavily occupied by financial firms. Now advertising, tech and architecture firms have been moving in.”

On Fulton Street, the retail spine for Brooklyn for 125 years and long a bastion of wig shops, sneaker discounters and gold shops, there has been an influx in recent years of more modern retailers, such as H&M, Old Navy, TJ Maxx and Nordstrom Rack. In addition, Macy’s is renovating and downsizing its Fulton Street flagship in a redevelopment with Tishman Speyer, which is converting the floors Macy’s will no longer use into office space.

“Those changes have had an enormous impact on us and how City Point has evolved,” Travis said. “Initially in 2007 when we purchased the site, we saw it as a big box center, serving the brownstone neighborhoods. But we woke up one day and said there is a whole new downtown. The project evolved into including movie theaters and food. To make those food uses work, it has to be busy from early in the morning to late at night. The [growing] diversity of downtown gave us a lot more confidence to create a food hall and space for three restaurants. Brooklyn really became a brand and we started to respond to that.”

The intent, said several executives instrumental in the project, is for City Point to weave into the fabric of the community rather than transform it; blend “authentically” rather than being plopped in.

“We’re sort of baking Brooklyn in, not just with the design but how we are sourcing the materials,” explained Jason Carney, senior designer at Gensler, the design firm that planned the retail portion of City Point. That includes utilizing reclaimed wood from the Coney Island boardwalk and from some Brooklyn water towers. “We are capturing the vibrancy of the neighborhood and creating more of an organic experience,” Carney said.

The Prince Street Passage, with light streaming in from both ends, “really does feel like a street rather than an interior space,” Carney said. “There’s minimal detail so interior branding will be clear and visible.”

“We are not copying something else or trying to be Williamsburg or Manhattan. We want City Point to be a really unique experience,” said Rick Cook, founding partner of CookFox Architects, which master-planned the property.

The exteriors are certainly unique, with the Gold Street facade dramatically composed of terracotta and wood and aluminum framed glass elements that allow daylight into the interior retail spaces. “The layered and stacked composition breaks down the block into a pedestrian-scaled architectural rhythm that recalls the historic streetscape of Fulton Street,” Cook said.

The Flatbush facade is also dramatic, with a 60-by-60-foot glass entry portal allowing daylight to seep into the interior. It’s visible crossing the Manhattan Bridge.

“The whole thing is conceived as very Brooklyn-centric,” Cook added. “People want to feel a sense of place, that they’re connecting to a place and its social activity. It has to feel natural and feel right. When you come inside City Point, you won’t feel isolated from the outside.”