The 202-year-old company will pursue a sale rather than a reorganization, with WHP Global and ABG seen as the leading contenders.

Brooks Brothers was always a passion project for Claudio Del Vecchio, and the Italian entrepreneur is hoping that its next owner will have the same respect for the heritage of the 202-year-old business — along with the tools and financial wherewithal — to keep it operating for the next two centuries.

On Wednesday morning, Brooks Brothers, which Del Vecchio purchased in 2001, succumbed to its debts amid the coronavirus crisis and filed for bankruptcy in Delaware.

The company listed both its assets and liabilities as ranging between $500 million and $1 billion.

The filing was not a surprise — WWD reported Tuesday that it was imminent. Brooks Brothers entered the process with $75 million in debtor-in-possession financing obtained from WHP Global, the newly formed brand management firm headed by Yehuda Shmidman that is among the parties interested in acquiring the business.

In addition to WHP Global, sources have said that Authentic Brands Group in partnership with Simon Property Group and Brookfield Property Partners is also interested in buying the iconic brand, known for dressing presidents and business titans as well as its signature preppy style.

While Brooks Brothers had been struggling for years even with Del Vecchio’s passion and backing — a result of men wearing fewer suits and the retailer’s inability to firmly tap into a younger customer — in the end it was a faster-than-expected slide into bankruptcy.

Although the company negotiated DIP financing before it filed, what it didn’t secure was a stalking-horse bid. According to sources, Brooks Brothers would have preferred to have filed with a stalking horse in place, but ran out of cash and couldn’t hold out any longer. The process now will come down to an auction that will be run by the bankruptcy court.

Unless other bidders emerge, the leading contenders continue to be WHP and ABG, according to sources. As the DIP lender, WHP has “secured a position on the intellectual property,” one source said, effectively setting itself up as the stalking horse. “This gets them in the game,” and even if it is unsuccessful in buying the business, it still has “collateral.”

One thing that is unclear is who would operate the Brooks Brothers stores if WHP is the prevailing bidder. The brand management firm was formed in July and so far has purchased the Anne Klein and Joseph Abboud trademarks. It is funded by Oaktree Capital Management LP, which recently increased its investment in the firm to $350 million, bringing WHP’s total funds available for dealmaking to more than $1 billion.

Its competitor ABG seems to be the victor in nearly every brand sale of late. Most recently it was involved in buying Lucky Brand Dungarees as well as Barneys New York and Forever 21. It has amassed a war chest that includes last summer’s investment of $875 million from BlackRock through its Long Term Private Capital arm, and also has an advantage because of its partnership with the leading mall developers, Simon and Brookfield. It also operates more than 5,500 stores around the world under various nameplates and through a variety of arrangements.

“Providing the DIP financing doesn’t give them a leg up,” claimed one source of WHP. “And the question is, who would be the operator and do they have the global reach of ABG?”

Shmidman declined to comment and Jamie Salter, chief executive officer of ABG, would say only: “Brooks Brothers is a great brand.”

In announcing the bankruptcy filing, Brooks Brothers said it will “commence a competitive auction where parties can submit qualified bids,” and the sale process is expected to be completed within the “next few months, pending court approval.” Until that time, the company will continue to operate its business and examine the reopening of stores that have been closed since March due to the coronavirus pandemic. Prior to the filing, Brooks Brothers had decided to permanently close about 51 of its 250 U.S. stores.

Del Vecchio said although the company had been exploring the possibility of a sale for several years, and had even considered a pre-packaged bankruptcy filing, it was the COVID-19 pandemic that ultimately sunk the ship.

“There wasn’t any choice,” he told WWD. “We’re a global brand so we started getting hit in China first, then Japan, then Korea, then Europe and then here — we never got a break.” 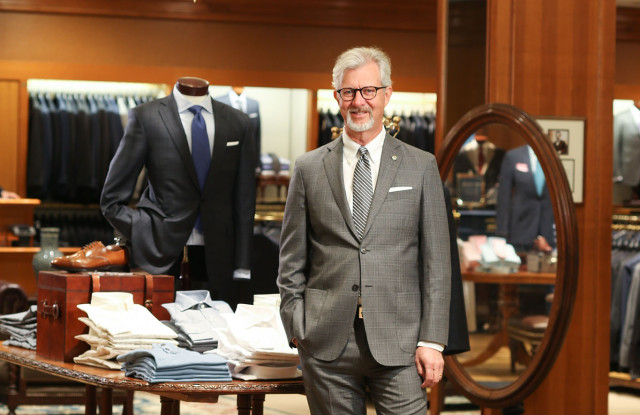 He said prior to the pandemic, he was in the midst of renegotiating a lot of deals with the retailer’s landlords to shed some of the company’s unprofitable locations.

“Our international business was growing and our e-comm business was growing, but the traffic in the United States — not just for us but for every specialty store — was the issue we had to solve,” he said. Then when COVID-19 hit, “the strategy had to change. We went from a situation that was very manageable — probably easier than during the financial crisis — to one that we really had no control over.”

He said the company is still negotiating with landlords, but at this point, the 51 stores are most likely the only ones slated to close. He said they are a mix of full-line and factory outlets.

A final decision has also been made on the company’s three factories — in Haverhill, Mass.; Long Island City, N.Y., and Garland, N.C. — which will now close permanently by Aug. 15. The closures will impact around 700 workers.

Although the company had hoped to find a buyer for the plants, that process was abandoned as a result of the bankruptcy. According to a spokesperson, while Brooks Brothers has “enormous respect for the craftspeople” who work in its factories, “domestic manufacturing is costly and these factories have rarely been profit centers.”

The factories manufacture only 6.8 percent of the company’s overall product offering, including suits, shirts and neckwear.

Even so, Warren Pepicelli, manager of the New England Joint Board of the labor union Unite Here, the union representing the 500 employees in Haverhill, was livid about how the process was handled.

He said the employees are receiving no severance and their health insurance benefits will not be extended. He said the plant is no longer operating and the equipment is being prepared to be sold. “All the machines are lined up and everything is dismantled,” he said. “It’s such a shame, it’s a very good facility and these are skilled workers.” He said when Brooks Brothers had publicly shifted the production in the factories to masks and gowns during the pandemic, “the workers went in scared out of their minds to make masks, and look what happens to them now.”

In addition to the factories, all the company’s international markets including Japan, China and the joint ventures in other countries around the world are excluded from the bankruptcy filing, Del Vecchio said. “They’ll all keep working the way they were before. We will keep supplying them with the service they require, we still are designing and we’ll keep making the product they need to sustain their business, so there’s no change there.”

But Alexis Bittar, the company’s jewelry company, is part of the filing. “We’re seeking a buyer for that business as well,” he said, adding that it will “most likely” go to a different purchaser than Brooks Brothers.

Del Vecchio said he has no idea who might ultimately wind up as Brooks Brothers’ owner. “The process at this point is an auction. We don’t know what people are going to come back with. The fact that our adviser had conversations with a few parties doesn’t mean those parties will participate in the auction. It doesn’t mean parties we haven’t talked to yet won’t be part of the auction. We hope it’s not a very long process, but we’re not starting the process with a stalking horse so the negotiations are completely open.”

He said he hopes to “find somebody who loves the brand and will try to keep all the elements of the company together. I’m very proud of the team that has supported the company for the last few years with me. I think what we have created is something that has merit and can be very successful. The filing gives the company the opportunity to be successful in the future and if you ask my opinion, if somebody has the financing to invest in the business as is, that would be my first choice.”

He said he’s proud of the product he created, the work he did globalizing the brand “and the relationship we built with our customers and associates, so I think somebody can come in and preserve that and build on that.”

“I’m not happy but on the other hand, I’m very committed to help the process. I don’t feel guilty about what’s happening. We’re trying to do the best for the company and make sure it has a bright future. This is not the first change in ownership in the history of the company and we hope the new owner can keep the tradition going.”

He said he doesn’t expect to be involved after the sale, but if there’s a project where he can be useful and he’s asked to be a part of it, “then I’ll make a decision.”

Del Vecchio will be involved in the future of the Madison Avenue flagship, however, which he personally owns. “I’m a landlord, and the new owner of the company will make a decision about what happens to that lease. I think it’s a fantastic location, that’s the reason I bought it, and because it was part of the history of Brooks Brothers. If it was up to me, it would be part of the future of Brooks Brothers, but again, I’m not the one making that decision.”

Del Vecchio said although he admits to making many mistakes since purchasing the business, “I have no regrets. I’ve never been afraid to make decisions and I think I understood the brand and the customer. Every decision I made was for the brand and the people who work for this company. I am sorry that I can’t deliver to them everything I wished I could, but if you go back 19 years and you look at the company today, it’s a much better company, it has a much reputation, has a much better team, much better product, so we should be very proud. And hopefully someone else can be as proud as we are.”

When Del Vecchio acquired Brooks Brothers from Marks & Spencer plc in 2001 for $225 million, it was a brand that had lost its way under myriad changes in strategy and mismanagement by the U.K. parent that sought to grow the U.S. retailer by lowering prices and rapidly expanding its store footprint. Del Vecchio immediately upped the quality of the product, including sourcing many lines from his native Italy, and at one stage tapped Thom Browne to design a capsule collection of men’s wear, Black Fleece. He also recruited Zac Posen to design the brand’s women’s wear.

But while both appointments brought the brand buzz in the fashion world, they did little to significantly boost the business on a global scale. Brooks Brothers’ sales have been flat at around $1 billion for the last several years, and it has watched young men seeking their first suit heading to competitors such as Suitsupply.

There will be a hearing at 2 p.m. Thursday on the debtors’ first day motions in the District of Delaware. Its largest creditor is Swiss Garments Co., which is owed $5.2 million.

With the filing, Brooks Brothers joins a host of other companies — including Neiman Marcus Group and J. Crew Group — that found themselves heavily indebted and without enough to reinvent their businesses in the midst of the pandemic.