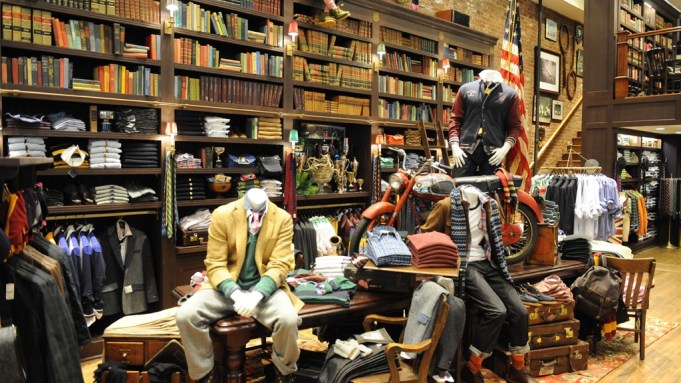 Brooks Brothers has thrown out the playbook for its new younger-skewed concept.

The Brooks Brothers Flatiron Shop, which opened Saturday, represents a major departure for the retailer in terms of merchandising. While the entire apparel assortment is also found in the company’s traditional Brooks Brothers stores, it is brought together in a creative, playful way to attract its target customer: college students and young professionals.

“This has allowed our organization to think creatively and not live by all the rules of retail,” said Lou Amendola, chief merchandising officer. “The customer doesn’t know those rules.”

So while the windows shout out that it is a Brooks Brothers store — Golden Fleece logo and all — that’s where the similarities end. Instead of the standard tables for shirts and ties inside the front door of the unit at 901 Broadway, at 20th Street, the store showcases an assortment of men’s and women’s sportswear. “We’re presenting everything a lot less formally,” Amendola said. “What’s here is in all Brooks Brothers stores, but we’ve created an environment to showcase it differently.”

For example, a men’s navy pin-striped suit is shown with a two-tone puffy vest and a bow tie. A women’s sweater dress is merchandised over a noniron white shirt, and black knit pants share a table with a patterned Fair Isle sweater. “It’s more fun and youthful,” Amendola said. Iconic pieces — such as a men’s herringbone sport coat and a double-faced peacoat, cashmere-lined gloves, classic penny loafers and knit ties — are all part of the mix, “but they just look different in this environment,” he added.

The mix is evenly split between men’s and women’s, and the store, which is located in a historic tin building that once housed a Lord & Taylor, spans 7,200 square feet on three levels, including a loft. The brick walls and wooden beams have been exposed, floor-to-ceiling curtains are fashioned from exploded repp-stripe-tie patterns, and antique furniture is sprinkled throughout. There is also vintage collegiate imagery from the company’s archives.

The downstairs, which offers Levi’s jeans, rugby shirts and boxer shorts in metal lockers, also offers many fun features, such as a foosball table and a photo booth. A wooden armoire has been repurposed to serve as the exterior of a fitting room, and there’s a one-of-a-kind bench that has been fashioned from old Brooks Brothers fabrics by Goods for Good.

Claudio Del Vecchio, Brooks Brothers’ chief executive officer, said he looks at the new store as a laboratory. “We know what our existing customer thinks of this product,” he said. “But we wanted to give the next generation of Brooks Brothers customer an environment to attract them so we can have a more direct relationship.”

Del Vecchio said he believes the concept can be rolled out to other places, especially China and Korea, where many of the most avid shoppers are young. “We think this has a lot of legs to expand in Asia and emerging markets,” he said. “It’s a strategic move to create new customers here and internationally.”

A second Brooks Brothers Flatiron will open in Toronto in the spring, he revealed.

Del Vecchio said that even though the concept may exist outside of New York City’s Flatiron district, the name will remain. “It has double meaning to us,” he said. From 1884 to 1915, when the company’s Madison Avenue flagship opened, Brooks Brothers had been housed in a location at Broadway and 22nd Street, two blocks away from this store. In addition, in 1901 Brooks introduced its first sack suit for men after noticing that university students were using flatirons to flatten their lapels.

Del Vecchio said it “represents how we honor the past and celebrate the future.”

He declined to provide a volume projection for the store or hint at how many Flatiron Shops could one day be in operation. “We will let the customer decide how many we can open,” he said. “But this can be in a lot of places.”