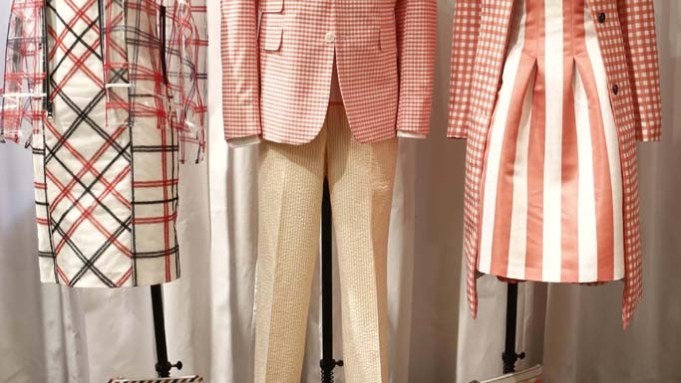 NEW YORK — Brooks Brothers took to the beach for its spring collection.

The retailer was inspired by the colors of the seashore, offering pinks, corals and varying shades of blue in its men’s, women’s and children’s offerings. And in keeping with the theme, Brooks Brothers has formed a collaboration with Reyn Spooner, the Hawaiian-based company that is credited with being among the first to develop the prints now commonly referred to as Hawaiian.

Lou Amendola, chief merchandising officer, said Brooks Bros. turned to Reyn Spooner for its reverse-printed designs on cotton and is offering men’s unconstructed sport coats, shirts, hats and accessories as well as women’s dresses and skirts with the washed and faded finish. “It’s the icing on the cake for our overall theme,” Amendola said.

The women’s collection is big on dresses for spring, many in tropical or poppy prints and men’s wear-inspired fabrics such as broken windowpanes. In men’s, there was more colorful sportswear than in the past, with linen shirts and chinos in equestrian and nautical prints.

Seersucker, a signature of the company, showed up in different colors and items, including a slim, black tuxedo with plain-front pants for men. And suits were offered in lighter shades of gray and blue this season. “The tailored clothing business is performing quite strongly at the moment,” Amendola said, noting that young men were embracing the slimmer, more fitted silhouette. There was also an unconstructed double-breasted knit sport coat with gold buttons that Amendola called “the new navy blazer.”

In the younger Red Fleece label, tailored clothing was slimmed up even more and the preppy-inspired aesthetic translated into hibiscus-print chinos and nautical sweaters for men and a sea horse-print dress for women. Amendola also revealed that Brooks Bros. will introduce a Red Fleece fragrance for men and women for holiday. A grosgrain ribbon will wrap the caps of the bottles in either a burgundy repp stripe for men or a navy and white polka dot for women. The men’s eau de toilette will retail for $60 while the eau de parfum for women will sell for $70; both will be carried at the company’s retail stores and online.

In the Thom Browne-designed Black Fleece brand, the designer paired opaque cottons, gingham, linen, seersucker, organza and voile in the collection’s signature navy and gray as well as bright blue, red, orange and yellow. He also used the tones of old Kodachrome photographs for a brown-and-white color offering.

“We’re coming off the second year where women’s has had the greatest percentage growth,” Amendola said, noting that the dresses and skirts have been especially popular.

In women’s, Browne introduced shorter lengths and more detailed pleats and hems, as well as a draped-drop shoulder coat for women and a bomber for both genders.