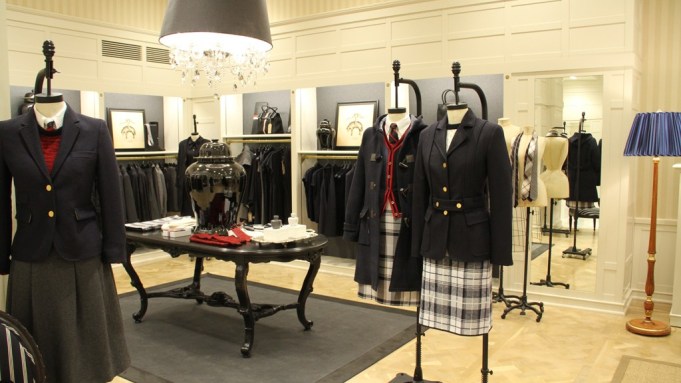 Women’s wear has made a grand return to the Brooks Brothers Manhattan flagship.

After more than two years in a temporary location next door, women’s merchandise has a new 8,000-square-foot home on the second floor, a spot that had previously housed men’s sportswear. It shares space with children’s wear as well as a smattering of home merchandise, and marks the first time that Black Fleece women’s wear will be housed separately from men’s. It also includes the debut of Brooks’ new University collection for women, a younger, slimmer-fit sportswear line that is being introduced this fall. This is also the first time the home collection has been sold in a store setting; it was previously available only online.

Brooks Bros. is in the midst of a multiyear project to rebuild its 120,000-square-foot Madison Avenue flagship, which it bought last year, in advance of the location’s 100th anniversary in 2015. The project has been going on for the past two years and is expected to continue for another two years. The exterior stone and brickwork have been redone and all the windows have been replaced.

In addition to the new women’s and children’s floor, the project includes a revamped men’s casual sportswear presentation on three, complete with a full-scale PGA golf simulator; men’s classic sportswear on four, and tailored clothing on five. Women’s was formerly housed on the fifth floor.

The final piece of the puzzle, the remodeling of the main floor, will begin sometime after this holiday season, said Lou Amendola, chief merchandising officer for Brooks Bros.

“This floor continues to embody the creation of the lifestyle of the Brooks Brothers brand,” he said of the second floor.

Boys’ and girls’ wear, which was formerly located in a “swing area” on the main floor, is now housed in an area right off the escalators. On Monday night, Brooks hosted a party for Jill Kargman and her eight-year-old daughter Sadie’s new children’s book, “Pirates & Princesses,” which drew hundreds of children and their parents to the new floor.

Amendola said the strongest performers in the University collection, which made its debut for men’s last year and has been expanded into women’s, have included rugby shirts, denim dresses and other preppy-skewed items. Brooks is planning to open a concept store for the collection in Manhattan’s Flatiron District later this fall.

Sales of the Black Fleece collection, which is housed in the corner in the front of the store, are up in the double digits this year, Amendola said. Next to Black Fleece is the home collection. He said the Supima cotton sheet sets, “home accents” such as pillows and lampshades in traditional fabrics, and towels in a variety of colors, have been popular.

Also new to the floor is a distinct home for women’s accessories including handbags, shoes, scarves and jewelry. There’s also an area for petites as well as a “Shirt Shop.”