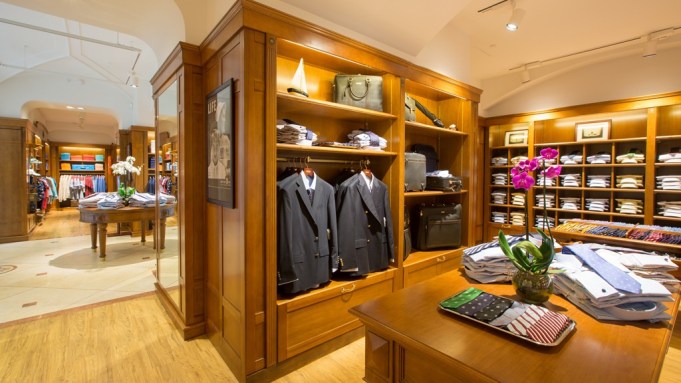 MOSCOW — Brooks Brothers has opened its first store in Russia in the historic GUM mall on Red Square.

“We are a very traditional brand, so we wanted to start in a place that represented something traditional,” chief executive officer Claudio Del Vecchio said of the store’s location. “It’s a beautiful building, and being a historical brand, there’s a big match there.”

The store is operated by Bosco di Ciliegi, the main shareholder in GUM and the distributor of luxury brands including Max Mara, Alberta Ferretti and Kenzo, among others, in Russia.

Del Vecchio said he was “very happy” with the way the store came out. “I wasn’t sure about the range, but it’s a very good expression of what we are; it’s very true to the foundation of our business.”

The store, which marked its opening with an elegant cocktail party and runway show last week, sells all of Brooks Brothers’ lines, including the upscale Thom Browne-designed Black Fleece collection. The shop itself is lined with traditional details including Singer sewing machines, as well as antique books by Russian authors such as Alexander Pushkin and Mikhail Lermontov.

“As an American working in Russia, I’m just kind of delighted every time we have a new American store opening here,” said Michael Idov, the editor in chief of GQ Russia. “Russia has been Italian-oriented in its men’s wear for a long time, nothing wrong with it, but I like seeing something like Brooks Brothers here. The goal is to make Russians wear better suits, and that I think is the direction that we’re heading. The whole sort of ‘shark skin’ is a bit of a stereotype that’s receding pretty fast. Over the last five years, Russian men have discovered the value of understatement,” he said.

“The store is really stylish and beautiful,” said Maxim’s advertising director, Alexey Stavrovsky. “It’s a very famous brand, and lots of people in the fashion world were waiting for Brooks Brothers to come to Russia,” he said.

Since the store’s opening, iconic Brooks Brothers items such as men’s dress shirts and navy blazers, as well as casual sportswear including Supima cotton sweaters and khakis, have been strong, the company said.

Women’s wear, which accounts for around 25 to 30 percent of the business, is also expected to play an important role in Russia.

“After a week of business there, it’s clear that our women’s [line] is very well accepted,” Del Vecchio said. “Hopefully it will stay that way. Maybe one day we’ll have to open a women’s-only store.”

If the store continues to perform well, it could be a precursor to other units in that country, but nothing has been set at this point. “This is our first entry into the Russian market, and we have a strong partner in Moscow,” a company spokesman said. “We first want to learn about the customer and their needs before we look at expanding to other cities.”