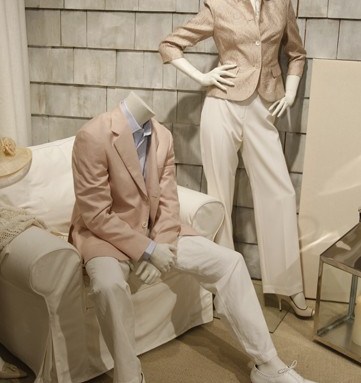 The Hamptons, the coast of Maine and the sand and surf of Palm Beach provided the inspiration for Brooks Brothers’ spring collection.

From washed-out khakis for men and coated linen coats for women to Americana-inspired knitwear and seersucker embroidered with sea horses or palm trees, the line evoked warm summer breezes and stress-free beach vacations. Nautical references were used throughout the line and carried through to Black Fleece, which offered seersucker with subtle anchor embroideries for both genders.

“This is the first time everything is wearable,” Claudio Del Vecchio, chairman and chief executive officer of Brooks Bros., said of the Thom Browne-designed Black Fleece. “Even the statement pieces.” There were more-feminine pieces, such as a crocheted skirt, this time around as well as additional knitwear offerings. Last week, the company introduced its first Black Fleece fragrance, which retails for $125, in 55 stores and online. Del Vecchio said it was the company’s first “luxury” fragrance but it was too early to get a read on its performance.

The company’s boys’ collection is also being beefed up for spring. “We’ve revamped our kids’ collection, it’s one of our major focuses,” Del Vecchio said. “Traditionally, our boys’ line was a smaller version of our men’s collection but now, we’re designing exclusively for kids. The line is being expanded and we’re doing more size-appropriate designs rather than a shrunken version of men’s. Our boys’ business continues to grow nicely this year, so it justified the investment.”

Right now, Brooks offers only boys but Del Vecchio hinted girls may be in its future. “It’s the number-one product that people ask for that we don’t have,” he said.

Other new items for spring include slimmer ties and an extra-slim shirt model. The Country Club collection is centered around golf and includes shorts with cocktail glasses for the 19th hole.

Turning to its new stores, Del Vecchio said Brooks Bros. newly opened Toronto flagship has been a particular bright spot. “It’s our second store in Canada and is doing very well. It’s running above plan.” He said the company will open two stores in Calgary in Canada next year and may expand beyond that as well, although no other leases have been signed. Closer to home, the Rockefeller Center boutique is also “doing very well,” he said.