The retailer, owned by Farfetch, will move to nearby Brook Street, by Claridge’s.

LONDON — It’s the end of one era, and the start of another for London retailer Browns, which is moving from its historic location on South Molton Street after almost 50 years, to nearby Brook Street, not far from Claridge’s in Mayfair.

To say that the retailer is South Molton Street institution would be an understatement: Browns, which was founded by the Burstein family in 1970, is a higgledy-piggledy lineup of interconnected shops on the walking street that connects Oxford and Brook Streets, with an Alice in Wonderland style charm.

Browns sells men’s and women’s wear, footwear, jewelry and accessories from a mix of established and emerging designer brands. Inside, it’s easy to get lost in the maze of luxury merchandise, narrow staircases and multiple levels with their squeaky floors and windows facing the cobblestone mews at the back.

Since the Seventies, it has been known as the retailer that took chances on once-obscure talents such as a young John Galliano, Alexander McQueen, and launched labels such as Missoni, Giorgio Armani, Donna Karan and Comme des Garçons in the U.K.

The new Brook Street store, located at the corner of Avery Row, will open in 2020, the retailer’s 50th anniversary year, and is poised to tell a different story. Now under the aegis of Farfetch, which purchased Browns in 2015 for an undisclosed price, the store is aiming to preserve its Mayfair flair, enrich its look and reshape itself for the digital era. 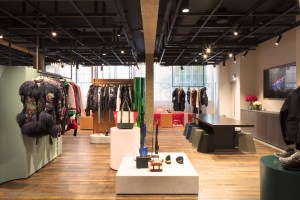 The interiors of Browns East in Shoreditch.  Ed Reeve

Principals are promising “exciting retail concepts” where customer experience is paramount and technology and personal service are a priority across 9,180 square feet.

Browns has tapped the hot Italian architecture and design firm Dimore Studio to refurbish the new site, which was built in 1720 and was formerly home to the fabric and wallpaper brand Colefax & Fowler.

The new Browns will span four floors, united by a central staircase. Interconnected rooms, original floorboards, hand-painted wallpaper and a private courtyard are meant to evoke a private residence.

All of that old-world grandeur will be offset by “monolithic modern structures,” according to Dimore, which has worked on projects for retailers such as Excelsior Milano, Fendi on Sloane Street, Frette in London, Pomellato in Milan, Aesop on Milan’s Corso Magenta and Cire Trudon in Paris.

José Neves, founder, co-chairman and chief executive officer of Farfetch, said that when his company acquired Browns in 2015, “I made a promise that we would take care of this iconic gem of our industry, and that we would continue to take a revolutionary approach to retail, both in-store and online.”

Both Holli Rogers, ceo of Browns and chief fashion officer of Farfetch, and Susanne Tide-Frater, chief consultant of augmented retail at Farfetch, stressed the importance of technology — and history — to the new store.

“We are excited to be able to offer a vital and engaging customer experience that draws on the store of the future technology whilst also playing homage to the history and story of both the location and fundamentally Browns,” Rogers said.

Tide-Frater said the digital and technology expertise of Farfetch paired with the creative personality of Browns “promises a firework of ideas and ever-changing connected experiences for the customer.”

The new store will feature “The Focus,” named after the Browns Focus store, and it will feature a hub of capsule collections, collaborations and emerging talent.

There will also be an immersive experience room, a series of multisensory and experiential retail pop-up spaces and a dedicated VIC, or very important customer, space.

The store will offer styling and wardrobe advice and a fashion concierge restaurant, which Browns describes as “food for the soul and a place to meet.”

Browns is also touting an “infinite shelf” of the retailer’s full product offering through in-store technologies, as well as flexible fulfillment points and delivery options designed to ensure speed and ease of access to considered and confirmed purchases.

Customers can opt to have product transferred from warehouse to store within 60 minutes, depending on stock. London-based customers can opt for same-day delivery, while VIC clients can select from an additional menu of delivery services, including 90-minute delivery, all transported by eco-vehicles.

The new Browns comes on the heels of Browns East, which opened in Shoreditch in 2017 as the first iteration of the Browns Nomad project, which will see the retailer move from venue to venue, or city to city, around the world.

The 4,000-square-foot unit on the corner of Club Row and Redchurch Street also fuses digital and physical retail, aiming to get product into the customer’s hands as quickly and efficiently as possible.

The Browns Brook Street announcement also comes less than a year after Matchesfashion.com opened a concept store, events space, private courtyard and café at 5 Carlos Place in Mayfair, about a 10 minute walk from Browns.

The moves are part of a trend among luxury fashion retailers — online and off-line — to offer speedy service, unique experiences and impeccable customer care in a world that is now saturated with product, brand messaging and wealthy — but time-poor — consumers.