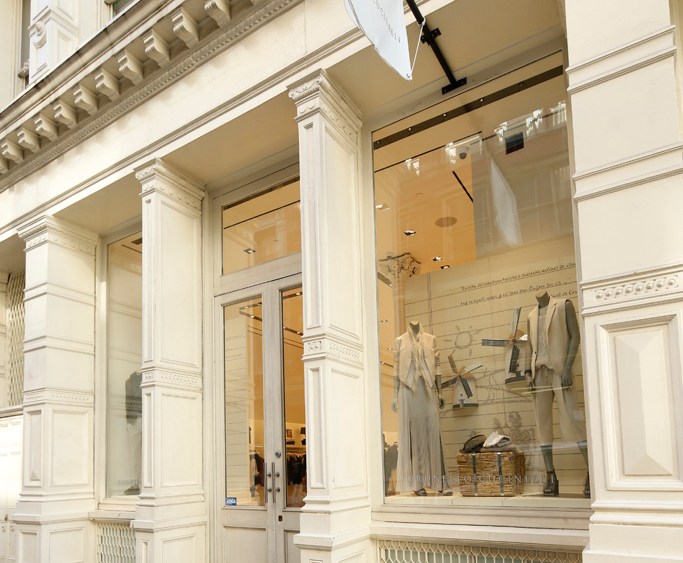 The store features the brand’s latest retail concept with white-washed reclaimed wood floors, a monochromatic color scheme and Umbrian walnut vitrines. Designed by architect Luigi Fiorentino, the store concept is lighter and more modern compared with the darker, rusticated look of existing units. The company plans to eventually bring its 102 monobrand stores up to date with the new design.

In addition to a flagship on Madison Avenue, Cucinelli operates a unit on Bleecker Street in the West Village. “It will remain open for 2015,” Cucinelli said. “The SoHo opening is, in part, a relocation of the Bleecker Street store as it affords the company the opportunity to present the collection on a larger scale. The SoHo location will function as a downtown flagship and will continue to cater to the needs of the Bleecker Street client as well as capture a new downtown audience.”

Of the nine new stores Cucinelli will open this year, three will be in North America: in Houston, Honolulu and Vancouver. The addition of these locations will bring to 16 the number of monobrand stores in North America.

Cucinelli said the SoHo flagship “embodies the essence of the company’s headquarters in Solomeo,” a medieval hamlet in Umbria that he’s restored over the last 30 years.

The men’s and women’s spring-summer collections are represented in the flagship by a set piece at the center of the store. Two male mannequins and one female one perched on a walnut wood platform with a surf board, paddles, skateboard and burlap cap and soccer ball represent Cucinelli’s theme for the collection — an active lifestyle — but it’s all filtered through the designer’s luxe lens. The mannequin wears a $1,745 raffia cape over a matte silk stretch top and washed duchesse silk pants and holds a $2,805 calf skin origami soft construction handbag.

In addition to cashmere knitwear and outerwear in boiled wool, cashmere, shearling and mink, items exclusive to the store include a new technique Cucinelli developed to perforate mink, using a fine blade accompanied by a tube of air so as not to burn the mink. An open weave hoodie is $1,995. There’s also a floral pattern using the same technique.

“A few of my favorite items special to this location is our women’s copper mink gilet and double-breasted wool gilet,” the designer said. Other items include a mink shopping bag lined with water-resistant silk, at $6,395, and an open-weave macramé top threaded with single strands of monili, tiny galvanized brass beads that are strung together by hand, $2,995.

The lower level, dedicated to men’s suiting, will offer a complete men’s wear and tailoring experience. Suits hanging in wood-lined “closets” are merchandised with ties and pocket squares. A tuxedo jacket paired with a chambray shirt is another example of the designer’s penchant for mixing formal and informal.