The designer celebrates a 20-year partnership with Bergdorf Goodman and waxes philosophical.

Clearly, Brunello Cucinelli is at a pivotal point in his career and his life — and as ruminative as ever.

“I am 65 years old. I have now entered the last phase of life,” Cucinelli told WWD in an interview Thursday at Goodman’s, the men’s store of Bergdorf Goodman, which 20 years ago became his first U.S. retail account.

“I would like to lead a life as a senior adviser working, as far as the company goes, as operating executive chairman and a creative director. I would like to be the adviser for my company, for younger generations. I can’t call it a retirement,” he added.

Cucinelli was typically talkative on Thursday, although there was an added touch of poignancy in his words — and fashion wasn’t paramount on his mind. He provided a fuller picture on his announcement last month of taking a step back from managing his company, and extending greater authority to his co-ceo’s: Riccardo Stefanelli, the husband of his eldest daughter Camilla, who has 13 years of experience in the company, and Luca Lisandroni, who joined three years ago from Luxottica.

“I have never overworked,” Cucinelli said. “I work eight hours a day and I have always worked eight hours a day, and now I work seven. But I always like to be very focused during those hours.”
Going forward, he acknowledged, there will be even fewer hours in his workday.
Then again, Cucinelli applies a humanistic approach to management, and believes that people are too digitally connected. He allows workers 90-minute lunch breaks, prohibits work e-mails on weekends, and considers himself a “guardian” of the future. In recent years, he’s befriended Amazon’s Jeff Bezos and SalesForce’s Marc Benioff, and has met with Silicon Valley entrepreneurs, encouraging them to also be “guardians” for a better world.
“Once we pass away there will be other men. We are only here in passing; I would like to think that in this time we are here we can contribute beauty to the world,” Cucinelli said.

He was in town for just a day and a half from Italy, to celebrate his 20-year collaboration with Bergdorf’s, meet with the BG team, dining at the BG Restaurant, and conducting a book signing of his book, “The Dream of Solomeo, My Life and the Idea of Humanistic Capitalism.” There won’t be other books by him.

“I am not a writer,” he said. “You know why I wrote this book? I would like to think that whoever studies us, I hope they would use my words.” The book contains some memories, and his ideals on life.

He’s created a capsule collection for Bergdorf’s of 20 exclusive women’s items with an evening aesthetic to mark the anniversary of their collaboration. 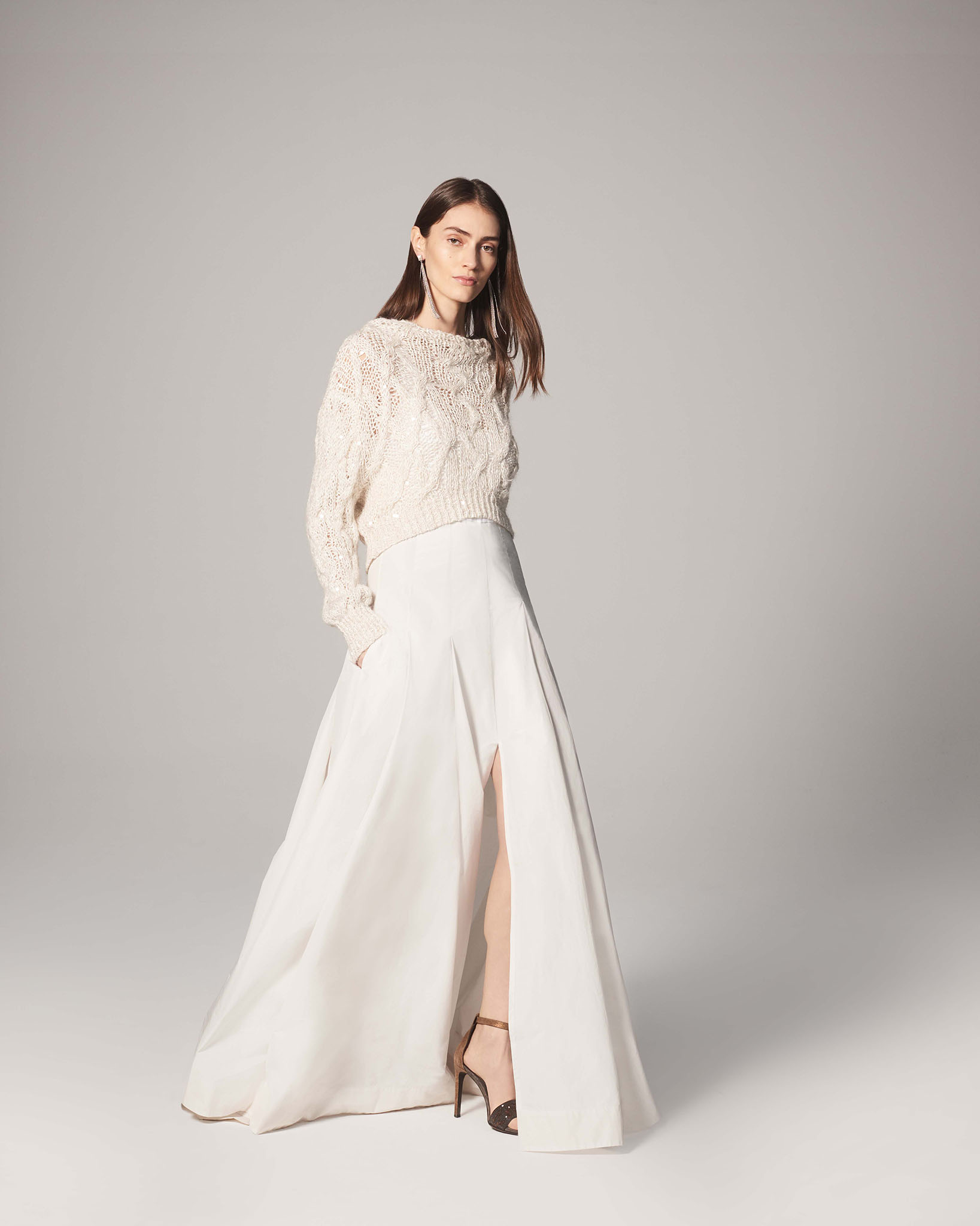 “Bergdorf Goodman has always been a point of reference for stores from a global standpoint,” Cucinelli said. “I don’t know anyone who works in the industry that doesn’t visit. You come to see fashion and changes as well. Throughout the past 20 years, there have been people here we worked with, partnered with, and had a lot of fun with.”

Thursday began with a walk-through of the women’s store and then a discussion on men’s suiting and how to give suits “a fresher more youthful take, a more contemporary take. This is the main topic. What needs to be done is a million-dollar question.

“It’s difficult to think that someone in their 30s today has a suit in their wardrobe. Once they enter the workplace and have meetings, in some way you have to have a nice suit. Absolutely — whatever line of work you are in.

“My grandfather only had one suit and he wore it on Sundays for occasions, a funeral, church,” Cucinelli continued. “He always wore the same white shirt and that navy blue suit. For us Italians, the dark suit is dark blue. It always make you look handsome. You look slimmer. Beige makes you look bigger. It’s true. Blue suits look good on everyone, independent of your hair color or skin color. The fit is very important, though.”

The bigger fashion challenge comes each season — to keep it modern and current. “To be modern, we need the courage to listen” and be aware of fashion cycles. “In this last three or four years, fashion has been very streetwear-focused. I feel there is a slowdown of this and a rediscovery of sporty chic elegance. This is quite normal because fashion really works in cycles. The streetwear world is starting to tire a little bit. As an Italian, if I met you, I would like to see you dressed in an elegant way. I would never meet you in a T-shirt, unless it’s breakfast on the beach.

“Twenty years ago, we produced 400 personal T-shirts for Steve Jobs. They were black, slightly mocked, slightly higher crewnecks. But now times have changed. This idea of only wearing a T-shirt, that moment has passed.

“I also like the idea of wearing a tie without a jacket,” he continued. “It’s almost an American taste. But in the evening, a jacket with a tie is important. The pant updates the look and the fit of the jacket so it really highlights your body is very important, even if you have a couple of extra pounds.”

Cucinelli sees women’s jackets trending a little less structured, adding, “Things are perhaps a little cleaner than they used to be. They are moving to a cleaner aesthetic. It goes hand-in-hand with this topic of harmony. What we are proposing is that we need to give you something new each season to update your wardrobe, but we need to be also good at producing without damaging humanity.”

On Thursday morning, Cucinelli addressed a gathering of 75 Bergdorf’s employees. “I did not speak about fashion. I spoke about values. We need to go back and look at the stars. We need to rediscover ourselves. We are too connected. We are always online on the weekends, after work. We are missing time to dedicate to ourselves. We need to regain the time for the spirit and time for harmony. Have you seen the new Japanese emperor [Crown Prince Naruhito will become emperor on May 1]? He has named this ‘the era of hope and harmony’ [Reiwa in Japanese]. That is beautiful. Perhaps the past 30 years we haven’t really focused on our soul. Humanity has improved from the standpoint of  discovering cures for some illnesses. The lifespan has gone up. But this idea of the malaise of the soul is increasing.”

The Bergdorf’s team doesn’t only seek fashion information, Cucinelli said. “They appreciate a global vision. I came to speak about humanity. They were teary eyed this morning. This is the best gift.” He didn’t neglect to mention how Bergdorf’s purchased his products 20 years ago, when the collection was only men’s and women’s knitwear. Now it’s a full men’s and women’s line of lifestyle ready-to-wear, and children’s wear is being introduced to stores in October.

“He was especially reflective, and his musings were more akin to a masterclass in spiritual civility,” said Linda Fargo, senior vice president of store presentation women’s fashion director. “It stood as an important and inspiring reminder of friendship, genuine partnership and that there’s more to what we all do and create together than sales and pre-fall seasons. Brunello has always been about more than luxury product alone, with his thoughtful approach to humanizing work and production.”

“When he came to the store this morning, he expressed gratitude for the partnership and wondered how are we feeling in the universe, the role of technology and that we need to look at the stars, be kind and be hopeful,” said Bruce Pask, Bergdorf’s men’s fashion director. “It was nice to put what we do in the context of humanity.” Cucinelli’s evolution from knitwear to an expansive lifestyle collection came “incredibly naturally and organically,” Pask said.

In September, Cucinelli visited Amazon’s Bezos at his home. “He had prepared for us a lot of small Italian bites — Italian salami, mozzarella, wine. He was very kind to me. He was well dressed — a jacket, a shirt, no tie. He was wearing our products.” He appeared “really a young ceo.”

Cucinelli was most impressed that during the two hours together, Bezos never picked up his phone. “I have never seen a man of his caliber not pick up his phone. I started to joke around, then I said, ‘Excuse me Jeff, you are the wealthiest man in the world. If I came 500 years from now to visit Seattle, what would you have left for humanity?’ He started to talk about this clock that is supposed to live for 10,000 years. I can’t explain it to you because when you speak to him you are talking to sheer genius. It’s like talking to Einstein.

“And I said, ‘Now, dear Jeff, we need to speak about the next 2,000 years of humanity. The Egyptians left the Pyramids. Pericles left the Parthenon. In Rome, the emperors built the Coliseum. We have plans for the next three months, three years, 30 years. But also for 1,000 and 2,000 years. When we run our business this is what we need to keep in mind. The same way the greats of humanity acted to build a better world.’ Before I left, Jeff said, ‘I will take up this challenge and I promise to discuss the next 2,000 years.’

“I would like my company to last 200 or 300 years,” said Cucinelli. “So I try every day to educate the new guardians of the future because I think we need to rediscover the concept of dedicating time to teaching and education and passing on the legacy. It’s also what I am doing with the entrepreneurs of Silicon Valley. Innovation combined with a humanistic approach. I find it beautiful and extremely important. If you are gay, a woman in the workplace, humanity has definitely improved.”