In a weak economy, Brunello Cucinelli’s sales have soared. But fashion’s philosopher king won’t let that distract him from what’s really important. 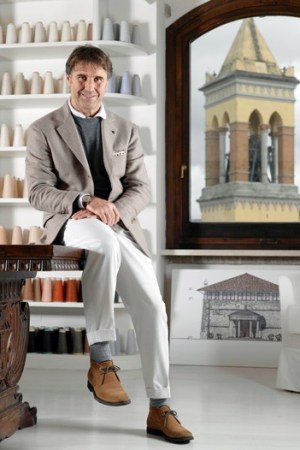 In a world of trend trackers and niche marketers, Brunello Cucinelli is a humanist and a philosopher. While his competitors consult with financial analysts, explore new media and open stores at breakneck speed, Cucinelli talks about “bringing back moral and economic dignity to work.” In his book Riflessioni—the title translates as Considerations—he imagines a dialogue between the Roman emperor Marcus Aurelius and Barack Obama. He describes his employees as “beautiful souls.”

But Cucinelli is also a savvy entrepreneur who has built an unshakable business reputation over the course of three decades. Two years ago, with the economy in crisis, the luxury market as a whole faced a sudden slowdown. Yet sales of Brunello Cucinelli’s rich cashmere sweaters, luxe sportswear and elegantly laid-back tailored clothing seem immune to recession.

“We’ve consistently grown since 2008,” says Cucinelli during an interview at his Milan showroom. “Despite the economy, we’ve never let go [of] any of our employees. We make a luxury sports-chic product that is highly in demand now.”

Indeed, the company’s 2010 revenues are projected to reach 200 million euros, or $264 million at average exchange, up from 158.1 million euros, or $219.7 million, in 2009. It didn’t hurt that in December official engagement photos of Prince William in a Brunello Cucinelli sweater shot by Mario Testino appeared in every conceivable media outlet. But the soft-spoken designer has maintained this growth largely without aggressive public relations and advertising. Instead, he puts an unwavering focus on values.

That includes the intrinsic value of every piece his company sells. Cucinelli, who proudly calls himself “a product man,” favors an artisanal approach to manufacturing and, despite his idealism, remains committed to exclusivity. “Luxury should be about a very beautiful product, and not over-distributed,” says the designer, wearing an ultralight cashmere jacket in one of the brand’s iconic desert colors over white corduroy pants, stylishly fitted and cropped at the ankle. “I don’t believe in accessible or democratic luxury.”

At the same time, Cucinelli—who has lectured on humanism in business at Harvard, and in November received an honorary degree in ethics and philosophy from the University of Perugia—sees quality of life as a universal prerogative. He lives and works in Solomeo, a medieval hilltop village in the central Italian region of Umbria, where his employees enjoy a 90-minute lunch hour and conduct their labor in an extraordinary setting.

Solomeo, where Cucinelli bought a 14th-century castle and surroundings in 1985, is an ongoing project and one of the designer’s most remarkable creations. Over the past 23 years, the entire village has been renovated to provide an idyllic environment for the workers (there are now 570 in-house and 1,800 contractors elsewhere in the region).

In 2008, Cucinelli unveiled a new theater complex inspired by the Gymnasium in ancient Greece that served as a social center as well as a facility where athletes trained. “This is a place that I hope will be a source of creativity, where people will hold debates, listen to music, learn and blend culture with the pleasure of living,” said Cucinelli, who is known for easily quoting Plato and Seneca. “My wish is to leave something special that will last for centuries and make Solomeo a better place, contributing to the beauty of it without overturning it.”

The theater, which seats 240, has three sources of inspiration, all from the Italian Renaissance: the work of 16th-century architect Andrea Palladio; the theater of Sabbioneta by Vincenzo Scamozzi, which also dates back to the 16th century, and Parma’s Farnese theater by Giovan Battista Aleotti. The complex includes, outside, a 600-seat amphitheater and two gardens lined with olive trees—all designed as harmonious additions to Solomeo, where all of Cucinelli’s clothes are manufactured. But Made in Italy hasn’t been a conspicuous part of the brand message—according to Cucinelli, it’s somehow understood. “You know, nobody has ever asked me if I produce in Italy,” he says. “Our Italian way of working and our lifestyle somehow emerge and reach the public.”

Communicating values, on the other hand, strikes him as increasingly important: “I try to let our customers know how we operate. Thirty percent of Solomeo’s theater was built with the contribution of our American customers.”

Cucinelli reports a marked change in the attitude of his customers in recent years: “If you bought very expensive things 10 years ago, you would hardly go and ask [about how the clothes were made]. Now you look at what the company is like, how it behaves, if it damages the community. There is a more civil sense.”

He also sees an ongoing shift in the male consumer’s feelings about fashion. “Men have changed a lot,” says Cucinelli, whose distinctive brand of casual chic has made an especially strong mark in the U.S., where sales are expected to reach $54 million in 2010, up from $39 million in 2009. “They pay more attention to details, especially in the way they dress—from the length of their pants to the fit of their jacket. And if I can help make them look younger, all the better.”

The brand has long associations with such retailers as Saks Fifth Avenue, Neiman Marcus and Bergdorf Goodman. (“We’ve always grown with these stores, and they build beautiful merchandising structures,” Cucinelli says.)

“Cucinelli represents what I call quiet luxury,” says Eric Jennings, Saks’ men’s fashion director. “It’s a brand that appeals to our international classic customer, who appreciates timeless pieces that have been reinterpreted with a young sensibility.”

In 2010, Cucinelli opened a half-dozen stores of its own—in New York, on Madison Avenue and Bleecker Street, and in East Hampton, N.Y.; Bal Harbour, Fla.; Las Vegas, and Beverly Hills. Another store is set to open in South Plaza, Costa Mesa, Calif., in April.

Globally, the company has 43 signature stores and 1,000 points of sale, with concentration in Japan, the U.S. and Europe, which represent 70 percent of sales. Cucinelli remains committed to wholesale—it still accounts for 73 percent of the revenue total. “The wholesale channel is a very harsh judge of the collections,” he notes, clearly viewing this as a positive force.

Meanwhile, he sees significant potential for growth in China, where two Brunello Cucinelli stores opened in December, to be followed by three more in 2011. (“We plan to have 17 venues there by 2013.”) China, Russia and India collectively account for 11 percent of the company’s sales, up from just 3 percent three years ago. “And in the next three years, we expect it to be 15 percent,” the designer says.

Still, Cucinelli refuses to let global expansion alter the fundamental character of his company. “We are known for a luxurious, beautiful Italian product,” he says. “And I personally front it with my face. If something does not work, I am the one who is responsible.”

“This is a life mission,” he adds. “I hail from the industry and not from finance.”

Not that he intends to resist further growth. “These dimensions suit me,” says Cucinelli, who cites Hermes, the messenger of the gods—and inventor of fire—in Greek mythology, as an inspiration. “I do want to grow, but constantly, gracefully.”