Lucas Ossendrijver bases his designs on fundamentals and fastidious tailoring. 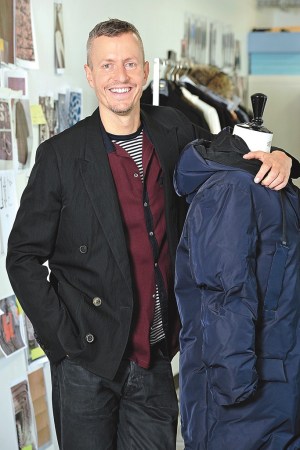 The ease with which contemporary men wed street style with tailoring in their wardrobes today can in no small part be attributed to the house of Lanvin and its prodigious men’s wear designer, Lucas Ossendrijver.

The taciturn Dutchman, who says he is “obsessed with construction,” has redefined classic men’s codes via cleverly deconstructed suits, a load of innovative high-tech fabrics and a line of sneakers elegant enough to be worn with a suit.

The 44-year-old, who still works hand-in-hand with a professional patternmaker, says he never buys fast fashion.

“When you have a well-tailored jacket, a pair of jeans and a good shirt — you don’t need much else,” he contended. The idea of building a wardrobe that lasts is at the heart of Lanvin collections today.

Having studied at the Fashion Institute in Arnhem, Ossendrijver made his debut at Kenzo in 1997, learning the ropes from Kenzo Takada himself. Following a stint at Kostas Murkudis in Munich, he joined Hedi Slimane at Dior Homme in 2001 on the quest for a slimmer, more modern allure, which proved revolutionary, before being called on board by his partner in fashion at Lanvin, Alber Elbaz.

Ossendrijver presented his first collection for the label in winter 2006, marking the dawn of a new era.

After nearly 10 years at the helm of Lanvin’s men’s wear department, the designer sat down with WWD to discuss the house’s past and reflect on how to make a “tailored” leap into the future.

WWD: Did Jeanne Lanvin leave a road map for men’s wear?
Lucas Ossendrijver: She was one of the first to think about lifestyle. Everything you needed for a man’s wardrobe was there. When I arrived at Lanvin, that’s the idea that we started with, not to think about fashion, but a full wardrobe. That’s where the sneakers came from, the separates and the deconstructed suits.

WWD: What struck you most about her approach?
L.O.: There’s no actual garments in the archives, only a few photos. But when I look at them, I get touched by the way things were made. It’s never just a fashion statement, it’s really about the clothes, always very wearable and very well done, not flashy. Lanvin is not an accessories business, we sell clothes and we try to make clothes that are neither basic nor extremely fashion.

WWD: How do you strike that balance?
L.O.: When we do a collection, it’s never about one silhouette; it’s always about different propositions, because in the end, it has to work for the client. Lanvin is quite democratic in that way. It’s very much about individualism, not a uniform. It’s about things that have a personality and are outspoken without being extreme.

WWD: Usually, men’s and women’s wear are separated. Not so at Lanvin. You and Alber form a close design partnership. How does it work exactly?
L.O.: I love Alber. He opened the door to the house of Lanvin for me and he trusted me to do men’s wear, and for me it was a huge opportunity. I think we established a relationship where the doors are always open. I go to see him when he does women’s fittings. And he comes to me. It’s really an exchange, a dialogue. It’s good to have somebody that has a different eye, who steps in from the outside and gives an opinion. A monologue doesn’t bring you further.

WWD: Men’s attitudes have changed a lot since you arrived at Lanvin almost 10 years ago. How do you cope with the new status quo?
L.O.: Over the years, men have gotten less afraid of fashion. Before, it was always the mother or the girlfriend who went shopping. It wasn’t important. Today I think men do care about the way they look and it’s not seen as feminine anymore. And I think that also reflects on the business side — there has been quite a lot of growth over the years.

WWD: How does that impact your job?
L.O.: Sales have gone up, which is fantastic, but it means that people expect more — men are not all the same. Men in China want different things from men in Europe, you have to cater to those needs, find a balance within the collection. Also, the way men buy today is similar to women. They buy less because of need and more because of desire. They look for more fashion-oriented pieces. You can’t do the same thing you did a season before and just change the color.

WWD: Are accessories important, too?
L.O.: They are becoming more important, also because it’s one of the first things men buy. It’s easier to buy a pair of sneakers than a suit. Before I arrived at Lanvin, accessories were nonexistent and one of the first items that really took off right when I started was the sneaker. I think the sneaker is to men what the bag is to a woman.

WWD: Your master tailor, Patrick Nogueira, mentioned that he would like to move Lanvin’s bespoke department in a more fashion-forward direction. What could this partnership look like?
L.O.: The biggest part of the made-to-measure business is classic suits, but I would love to bring in some elements of fashion that are really new. These could be fabrics with a new touch or texture and color — no screaming prints, just a little bit more energy. Maybe make the shoulder a little bit more narrow, propose a lighter construction, have a look at the lapel so that it resembles what we do in ready-to-wear. Also, men who come for a bespoke suit are in general older, but I would love to dress younger clients in bespoke as well.
I love men’s wear because of the construction. I’m obsessed with tailoring, everything that’s inside, that you don’t see but that gives structure to a garment.

WWD: Is this how you ended up designing men’s instead of women’s?
L.O.: I’m not a decorator, I’m really more of an architect with garments. I love going to factories and working directly with people who make the clothes to find solutions and also to find newness within that. Men’s wear is more about the millimeter of garment.
The fascination started when I went to a flea market when I was still in art school; I found a second-hand jacket there, it was hand-made and I tore the lining off to see what’s inside. It had lots of ribbons and horsehair, everything was hand-stitched. At that time I didn’t know why it was there, it was so complicated. It was really like a puzzle. But it got me interested.

WWD: What is your ultimate goal at Lanvin?
L.O.: To establish a language with a vocabulary that people recognize as Lanvin but that is wearable, functional and believable. I’m not here to bring the most extreme new fashion every season, the latest “its” — that’s not something I’m interested in. I want to try to make a wardrobe that evolves, that people can keep for several seasons and that has a function in life.

WWD: Has anyone in your family done fashion?
L.O.: My father had a construction company, and my sister works in construction.

WWD: Construction, there you have it.
L.O.: Exactly — maybe that’s the link! It’s true I have always been attracted to architecture and design. But architecture is very slow. It’s a long-term process, and I’m really bad at mathematics, so that wasn’t a good start to it, and what I love about fashion is the speed, the possibility to start again, and again, and again.