MILAN — Bulgari has homed in on a storied location in its hometown, signing an agreement for a new hotel in Rome, scheduled to open in 2022.

The hotel will be strategically located in the central Piazza Augusto Imperatore, not far from the city’s Spanish Steps and Bulgari’s flagship on the luxury shopping street Via Condotti.

The hotel will occupy a stately rationalist building erected between 1936 and 1938 and designed by architect Vittorio Ballio Morpurgo, facing two must-see Roman landmarks, the Ara Pacis and the the Mausoleum of Augustus, the first Roman emperor, a site that is under renovation.

“We saw so many beautiful locations, but from Day One I was aiming at this square, the most extraordinary place in Rome, where the first Roman emperor was buried — it has a symbolic value,” said an upbeat Jean-Christophe Babin, chief executive officer of Bulgari. “The hotel will be surrounded by history, with its Baroque churches, palazzi dating back to the Thirties, and the modern architecture of the Ara Pacis, it summarizes 2,000 years of Roman architecture. To me, the hotel standing in front of Augusto is a dream and an honor.”

Babin believes the Bulgari Hotel will kick-start “a new generation of five-star hotels” in Rome. In a video filmed by Bulgari, the city’s mayor Virginia Raggi is seen speaking with Babin and praising the project and the executive sees the development as “participating in the restart of the city, a sign of Italian entrepreneurship aiming at the future, that creates jobs and has no fear of competing with international hospitality giants.”

The almost 280,000-square-foot edifice is characterized by traditional Roman materials and colors, such as ochre travertine marble and burnt red brick. The rigorous rationalist architecture is juxtaposed with Antonio Barrera’s frescos, running in the Via della Frezza atrium and offering different views of the Mausoleum, while the southern face is decorated with a 756-square-foot mosaic by Ferruccio Ferrazzi, interpreting the myth of the foundation of Rome.

Once again, Bulgari turned to Italian architectural firm Antonio Citterio Patricia Viel, in charge of the architectural project and the interior design of the hotel, which will count more than 100 rooms, most of them suites, as well as the prestigious “Il Ristorante” overseen by Michelin-starred chef Niko Romito and “The Bulgari Bar.” The latter two will be located on the top floor with a view of the city’s skyline. The venue will include a luxury spa with an indoor swimming pool, and a state-of-the-art gym, offering Bulgari’s exclusive Workshop training method.

In a first, Bulgari’s Rome hotel will also feature a reading room carrying a collection of volumes dedicated to the history of jewelry, open to the guests and to the public by appointment only. “Rome is synonymous of culture, it would be difficult to conceive the hotel here without access to culture,” said Babin.

Standing on the building’s facade, on top of a fountain, a Latin inscription reads: “This is the place where the Emperor Augustus’ soul flies through the air.”

The building is owned by Edizione Property, which is controlled by the Benetton family, and assisted by CBRE Hotels for tenant selection. Babin said he was “proud of this all-around Italian monumental project.”

The Bulgari Hotels and Resorts Collection comprises six properties in Milan, London, Bali, Beijing, Dubai, Shanghai and which will be extended with inaugurations in Paris, Moscow and Tokyo. The pandemic stalled the works, so that the Paris hotel, meant to open before Christmas, is expected to be unveiled in February or March next year. Moscow is forecast to open in 2022 and Tokyo in 2023. Babin also revealed Bulgari hotels are slated to open in the U.S., but he said it was too early to reveal locations and dates.

Marking the Rome project, Bulgari has created a special jewelry piece, “The Bulgari Ospitalità Italiana Necklace [Bulgari’s Italian Hospitality necklace],” a white gold tubogas choker enriched with 10 precious stones, each matched with each city housing a Bulgari hotel. The made-to-order piece is prices at around 50 million euros and “is a spectacular and incredible jewel that will remain in the history of jewels,” trumpeted Babin, “with rubies, sapphires, emeralds and each stone linked to a city,” said Babin. For example, jade is associated with Beijing, a ruby with Shanghai, a rare red diamond with Rome and the tourmaline Paraiba with Bali, “reminiscent of its blue sea,” he explained. 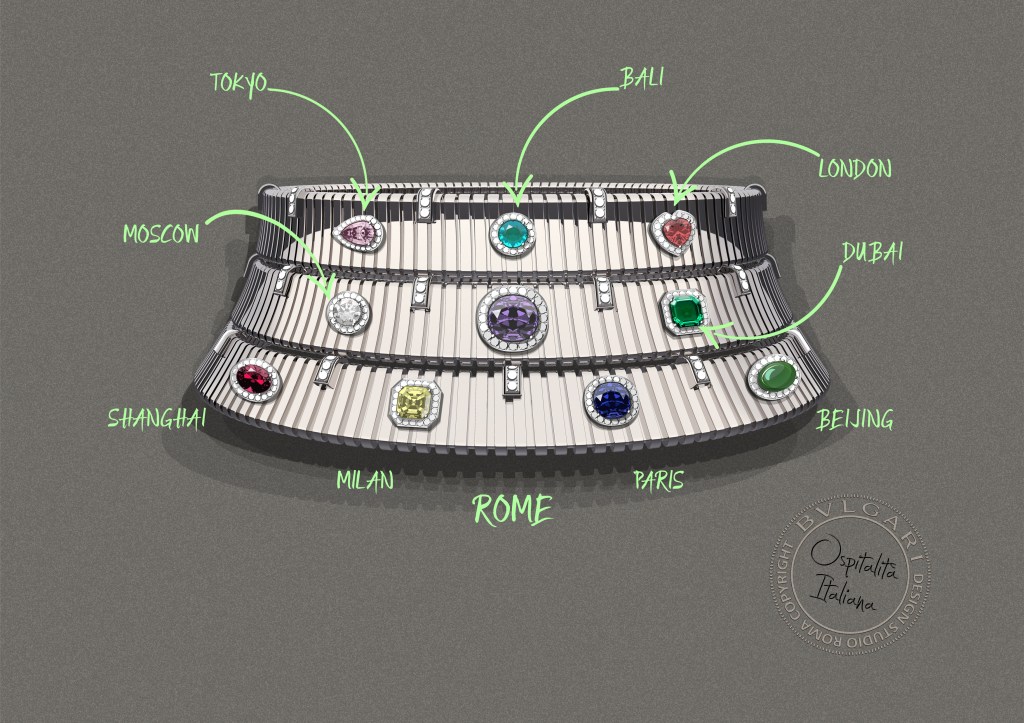