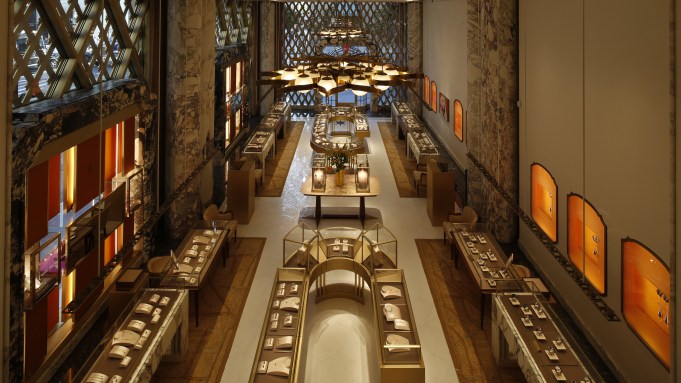 NEW YORK — Luxury executives are unquestionably cautious this year. Yet for Bulgari, it’s about bringing on “La Dolce Vita.”

On Friday, Bulgari reopens its flagship on Fifth Avenue and 57th Street in Manhattan, among the world’s busiest prestigious commercial corners, after an 18-month redesign by architect Peter Marino and a multimillion-dollar investment.

“This is our most magnificent and lavish store,” Jean-Christophe Babin, chief executive officer of the Rome-based Bulgari, told WWD. “It’s by far our most expensive store ever. The price is confidential.”

“Jewelry is a luxury product. We are selling luxury goods. There has to be a luxury environment,” said Marino, who also designed the Bulgari stores in Rome and London. Asked about the flagship’s budget, Marino replied: “Believe me, we did have a budget and the budget was high. But I don’t do the money part. It’s not my area of expertise or concern.”

Bringing grandeur to the site certainly was the goal.

The rosetta mesh facade Marino created is inspired by a heritage bracelet’s clasp from the Thirties. The white marble and glass mosaic floor features the brand’s signature eight-point Condotti star, which stands for “All Roads Lead to Rome.” And the overall interior and its mezzanine recall a classic Italian theater with a balcony.

Oval-shaped counters in light galvanized iron are inspired by the Italian architect Carlo Scarpa. There are two chandeliers by Italian architect Gio Ponti, and three intimate areas for accessories, a lounge, and on the balcony a VIP room filled with Italian furnishings. And there’s an architectural staircase with hexagonal steps that pay tribute to the work of Carlos Scarpa in the Palazzo Abatellis in Palermo, Italy.

Throughout, Marino used rare marble and ancient stones typical of Roman buildings. He decorated the space with contemporary furniture by Italian designers in the style of their forerunners and with some original pieces purchased at auction or from a dealer, including a Forties table by Osvaldo Borsani and Forties chairs by Paolo Buffa.

Essentially the site is a mix of tradition and contemporary, and Rome and New York. “A Roman identity and the inspiration of Roman architecture is very central, but so is disclosing the Bulgari image of the 21st century,” Babin stressed.

With a facade of over 1,000 small rosettas which by night will be LED-illuminated, the flagship, Babin said, “fills you with emotion and surprise — and then you enter into a majestic Roman atmosphere with beautiful marbles that’s also contemporary and warm with its saffron color and colorful paintings from Andy Warhol,” who connected with the brand.

“When Warhol was in Rome he compared our flagship there to the most amazing contemporary museum,” said Babin. “As a tribute, we have decided to decorate the store with his silkscreen prints.” Three will be hung in the VIP area later this month, and can be slid along the wall to reveal a mirrored TV screen, enabling guests to view the collections.

Warhol once offered Nicola Bulgari, a grandson of Sotirios Bulgari, the founder of the 134-year-old luxury brand, some of his paintings in exchange for some Bulgari jewels. “In those days we were both very young and I did not like his style, and had no idea that one day his paintings would be worth so much money,” said Bulgari. “So I simply refused. It was the worst deal of my life.”

“Along with our Roman expression, we really wanted to bring an artistic expression to the store because we are in New York,” said Babin. “We are Italian. We are Roman. Americans love Roma, Italian art and architecture. They have a connection to our city and to ‘La Dolce Vita’ and we see in the U.S. greater potential for luxury.”

There’s a special New York capsule collection of about 30 jewelry pieces designed in shades of red, white and blue, interpreting the U.S. flag without actually copying it and paying tribute to America in the Seventies. It mixes Bulgari trademarks with stylistic elements evoking the U.S. and Seventies graffiti art. Among the most exuberant pieces: a blue-red-white necklace with dangling tanzanite, rubelite and diamonds; a ring celebrating the stars and stripes with precious gemstone rows, and a necklace and bracelet set in lapis, coral and pavé diamonds with star detailing crafted on the jewels. Bulgari’s other jewelry collections — B.zero1, Divas’ Dream, Serpenti, Monete and Parentesi — are inspired by symbols and motifs of Rome translated into contemporary designs. Bulgari also offers fragrance, accessories and watches.

Babin believes the New York City flagship, housed at the base of the Crown Building since 1989, will be Bulgari’s number-one location. Without revealing any volumes or sales projections, he said the New York store has been among the top four or five Bulgari stores, behind the Tokyo, Dubai and Hong Kong flagships.

“We started in the United States with a presence in the Pierre Hotel more than 45 years ago,” Babin said. “It’s time to get to the next level in the U.S.”

Bulgari has been working at it, this year opening in the King of Prussia Mall outside Philadelphia, renovating its Michigan Avenue, Chicago boutique, improving the web site and adding services such as “click and collect.” A store in Boston on Newbury Street opens in November. And like other venerable fine jewelry brands, Bulgari is seeking to project a younger appeal to tackle a broader audience. Among the initiatives: introducing a Divas’ Dream handbag aimed at Millennials, enlisting London designer Nicholas Kirkwood to reinterpret the Serpenti Forever design and Bella Hadid as the face of Bulgari’s Goldea, The Roman Night fragrance.

There’s reason for optimism considering forecasts indicate the U.S. will remain one of the most appealing markets for Italian exports over the next five years, and in 2022 will be the largest market for Italian exports of high-end goods, generating revenues of 13 billion euros, or $14 billion. Also, some luxury labels have recently seen a lift in business.
Still, business at Bulgari, Bergdorf Goodman and other stores in the Midtown neighborhood has been affected by security measures around Trump Tower on Fifth Avenue between 56th and 57th Streets, to protect the president and the Trump family. “That can limit traffic significantly, but it’s still very good,” Babin said. “This situation is not specific to New York. Any city where there are top-ranking politicians coming in always limits the traffic. It’s something we have to live with.”
“Try building a store across the street when the Secret Service doesn’t let you cross the street. It’s very, very difficult,” said Marino. “This one has been really rough — one of the more challenging experiences of my life. Construction is regularly stopped when he comes to town.”

As Marino sees it, too many upscale stores are subdued, created with dark brown and beige palates that attempt to let the product stand out. “They all seem to have lost their souls,” he said. “Before Bulgari hired me, I felt they also lost their soul. I thought they’re not really expressing the brand in its architecture.

“The Romans are not known for quiet good taste,” Marino said. “I’m not quoting Caligula here, but Rome is not Milan. One might be very Baroque. One might be very flat. For the outside [of the flagship] I decided we can’t be doing an anonymous pale beige stone. I took unusually beautiful Roman marbles also used in the Vatican, to say, ‘this is Rome,’ where the women are beautiful and the jewelry is large, arrogant and colorful. We are not talking about prim, quiet taste. It’s not what the brand stands for.”