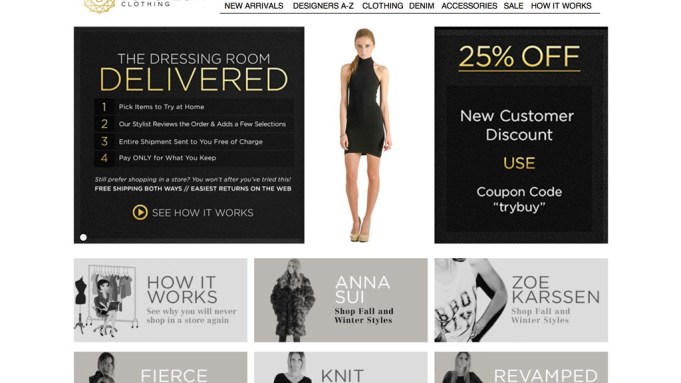 Developed in Los Angeles and Las Vegas with a team heavy on technology and retail experience, the new e-commerce concept is tackling one of the biggest barriers to fashion purchases online: that women can’t try on the clothes. It does so by shipping customers a range of additional options picked for them with every selection and easing the process of returning merchandise to encourage shoppers to try the merchandise before they purchase it.

Bronstein started The Bungalow as a 1,000-square-foot store in the Las Vegas neighborhood of Summerlin in 2011 after two years earlier selling Talulah G, a Las Vegas retailer she expanded to four stores generating $6 million in annual sales. Introduced to Wright through Snyder, Bronstein said, “I really wanted to connect with someone who would be a business partner and would be able to scale my business online.” Wright’s ideas appealed to her because she felt shopping online had become too impersonal.

Bronstein is responsible for buying Bungalow Clothing’s merchandise and filling shipments with pieces beyond customers’ original orders. Most of the brands available at Bungalow are in the contemporary segment, and there’s a mix of emerging and well-known brands. Among the brands available are Graham & Spencer, Current/Elliott, Hudson, Kelly Wearstler, L’Agence, NSF, DL1961 and Elizabeth and James. Going forward, Bungalow intends to bring in high-end designers as well; for example, it is targeting Balenciaga and Givenchy.

Bronstein described Bungalow Clothing’s core demographic as active, busy women aged 30 to 48, a group that includes her. In fact, she thinks a lot about what she and her friends like to wear when scouring merchandise for Bungalow. “I’m about to turn 40, and I buy very differently than I did in my late 20s in my Talulah G days. I’m more practical and, obviously, the economy has changed a lot, so I want more wear out of the items I buy. I buy fewer items, but I spend more per item,” said Bronstein.

Typically, a customer chooses four or five items, and Bungalow supplements that with up to four extra items for an average shipment valued at around $1,800. Customers enter their credit card information when they order, but they are only charged for what they keep after they send back items they don’t want. They have 10 days to return the items, which are shipped back to Bungalow in the box they arrived in. Bungalow provides a prepaid shipping label and packing tape, and instructs customers to text Bungalow when they are ready to return items. Bungalow sends FedEx to pick up the boxes.

Customers can complete a roughly 10-question style profile after they order, although Bronstein doesn’t rely solely on the profile when adding pieces to shipments. She also takes into account customers’ sizes and the items they chose, and uses her intuition honed over many years as a merchant about their style and preferences. “It’s as if they went into a store and found an amazing salesperson who cares about how they look in their clothes and brings more things into their dressing room,” said Bronstein.

Wright said he’s close to completing a fund-raising round of $500,000 to $1 million, and will seek a few million more next year to grow the business. With those funds fueling Bungalow Clothing, he estimated it could reach $25 million to $30 million in yearly revenues by the end of 2014. In addition to its e-commerce capabilities, Bungalow is developing three technologies: one to assist stylists when they build upon customers’ orders, another to assess how much customers are able to pay for purchases based on public data from social media networks and a third to help manage inventory via a mobile app.

Asked about the prospects for profits at Bungalow Clothing, Wright said, “Our business right now wobbles back and forth between being profitable and unprofitable, the big variable being how much inventory we need to buy. My goal is not to get profitable as fast as possible. It’s to gain market share in a cost-effective way.”