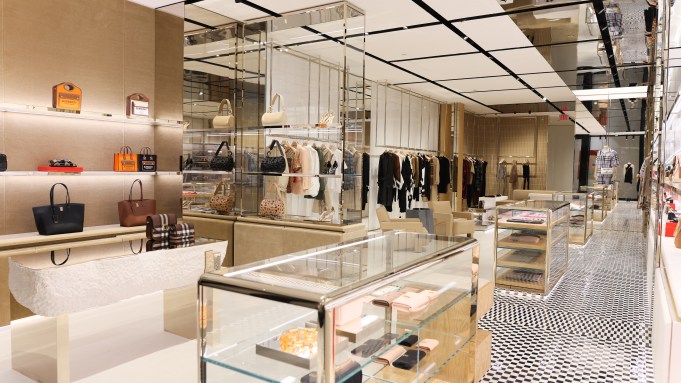 LONDON — Burberry is ramping up its presence in the key U.S. market and aiming to appeal to locals and tourists alike.

A month after staging a mega-takeover of Neiman Marcus’ Atlanta store at the Lenox Square mall, the brand has moved south to Miami, and is set to open a store at Bal Harbour Shops.

The new womenswear store, which opens on Monday, is located on the lower level of the open-air luxury shopping mall and features the brand’s latest design concept by Italian architect Vincenzo De Cotiis.

“Bal Harbour is one of the most established and well-known luxury destinations in Miami, and is among the most visited shopping malls in the United States. It also caters to a broad range of both local and international customers. We are excited to bring our new global design concept to this iconic destination,” said Thibaut Perrin-Faivre, president of Burberry Americas.

The store, which spans 2,023 square feet, carries handbags and small leather goods, including the bestselling Lola and TB Monogram bags. The Lola features quilting inspired by the signature Burberry check, and color combinations ranging from classic black and beige to orange and peach pink.

There is also a selection of the spring 2022 pre-collection, including sketch-print T-shirts and hoodies, monogram map-print shorts and anoraks, dark brown chevron check oversize cardigans and miniskirts.

The store concept sees the house codes, such as the Burberry check, reinterpreted. There are mirrored ceilings with intersecting metallic grids and tiled checkerboard floors meant to create a sense of openness.

The facade features a blend of stone and champagne metal arranged in the signature house pattern and finished with black edging. Inside, the walls have been decorated in a trench-colored mosaic tile and reflective white lacquer, or covered in beige mohair.

The concept debuted a year ago at 1 Sloane Street in London, part of a new development by The Knightsbridge Estate. As reported, Burberry nabbed the key corner site overlooking Brompton Road and Sloane Street and was the first tenant to occupy one of seven planned flagships.

The immersive installation at the retailer’s Atlanta store was meant to showcase the latest Burberry TB Summer Monogram collection.

It was the first time in Neiman Marcus’ history that the entire exterior of a store was taken over by a brand. The outside of the Atlanta store at the Lenox Square mall was wrapped in a pattern that fused the Burberry check with the TB Monogram print. Inside there was a graphic, sculptural space that included the Burberry signature patterns.

At the time, Perrin-Faivre said that Burberry has “continued to unlock new possibilities” in the U.S. market. This year alone it has staged a takeover of its Rodeo Drive store themed around the spring 2022 collection; brokered a partnership with downtown New York City restaurant Lucien, and undertaken the collaboration with Neiman Marcus Atlanta in June.

As reported, Burberry has been doubling down in the U.S., and courting customers in smaller cities where demand for luxury goods is on the rise.

Despite Burberry’s many efforts, the brand’s sales in the U.S. slowed by 4 percent in the first quarter due to “very tough comparatives” with the corresponding period last year.

Julie Brown, Burberry’s chief operating and chief financial officer, said there was “good growth in outerwear with bags also outperforming” in the region, while U.S. customers have been moving to higher AUR [average selling price] categories.

“We haven’t seen any major pressure on [U.S.] consumers at this moment in time,” Brown said in response to a question about whether shoppers were spooked by surging inflation.