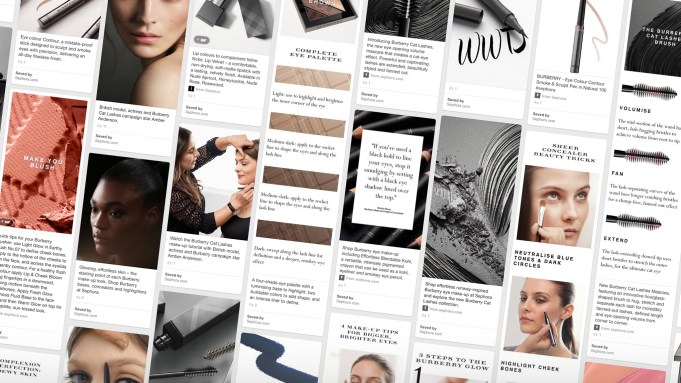 Burberry is taking to Pinterest to launch its latest beauty product, aiming to capitalize on the platform’s 38.5 million monthly unique viewers in the space.

In tandem with the launch of Cat Lashes, the brand’s new mascara that launches today, Pinterest will begin to generate custom boards for users populated with Burberry Beauty content and product. It’s Burberry’s latest attempt at using social media to introduce a new product to consumers.

“Beauty is huge on Pinterest, and we wanted to bring that to life in an innovative way that had never been done on our platform. It’s taking in [user] beauty preferences and giving them a new way to look at the category through the lens of Burberry,” Radhika Prakash, creative and brand strategist at Pinterest, told WWD Tuesday morning. She said Pinterest approached Burberry to forge a partnership over a year ago.

Currently, there are more than 2 billion beauty pins and four million beauty boards on Pinterest. According to an internal study conducted by the platform, 42 percent of pinners have made a beauty purchase after viewing a pin.

Burberry wants in on this. The brand, which spent six months developing the campaign with Pinterest, is betting on the platform’s massive beauty audience to serve as the launch pad for Cat Lashes. The majority of the brand’s marketing budget for the launch is being pumped into social media, according to the brand, which said the campaign will be live through the end of the year.

It marks the first paid beauty partnership of its kind on Pinterest as well as the first time the platform will sample any kind of beauty product to its users (the first 5,000 people to create a board each get a free sample of the mascara). Both parties declined to comment on fees or speculate on how many boards Pinterest could generate for users in the first month of the campaign being live. But an industry source estimated that, given the scale of the project, Burberry would have had to invest in the seven figures to be first to market to integrate Pinterest’s application program interface, or API, to create personalized boards on users’ profiles.

Personalization is at the heart of the campaign, with consumers filling out a quiz to determine the Burberry Beauty-centric content they will see on Pinterest. Links to the questionnaire will be posted to Burberry and Sephora’s social media channels (as well as on promoted Pinterest pins starting next week), with users directed to a microsite to fill it out. After plugging in their initials and answering two questions — “How long do you spend applying your makeup?” and “Does your makeup look include smoky eyes, feline flicks or long lashes?” — they will be prompted to log in to their Pinterest account. Once signed in, they will get a personalized board with content and shoppable pins that all link to sephora.com. Cat Lashes will roll out to Sephora stores over the next two weeks.

Consumers will be presented with different Pinterest boards depending on how they respond to the questions, Prakash explained.

For instance, a user with a five-minute routine will get a different set of pins than someone who spends “15 plus” minutes applying their makeup each day. Sample boards, with product suggestions varying on users’ answers, could range from “How to Get Look-at-Me Lashes in 15 Minutes Made For [Initials here]” to “How to Get Flawless Smoky Eyes in 10 Minutes Made for [Initials here].”

Cat Lashes, available in Jet Black, Chestnut Brown and Midnight Blonde, will be sold exclusively at Sephora and on burberry.com starting today. It’s the third mascara in the brand’s beauty collection, designed with an hourglass-shaped brush, varying-size bristles and a cone-shaped tip that extends to corner lashes give a cat eye look. It retails for $29.

This is just the most recent in a long string of digital firsts for Burberry, which in April took to Snapchat to launch its Mr Burberry fragrance. The brand debuted the scent via a Mr. Burberry Discover channel on platform. True to Snapchat’s ephemeral nature, the channel was only live for 24 hours, but users who scanned a Burberry Snapcode at a point of sale through June were able to access the channel.