Prada, Gucci and Dolce & Gabbana stood out to buyers at Milan.

By Luisa Zargani and Emilie Marsh and Jean Scheidnes on January 20, 2010
View Slideshow 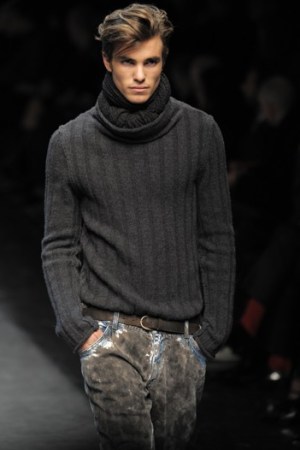 MILAN — Italian men’s wear designers smartened up their acts for fall by playing to their strengths and offering a commercially viable selection of informal fare that hit just the right notes with buyers.

“Brands have created good collections for wardrobes,” said Jason Broderick, Harrods’ head of men’s wear buying. “The season wasn’t about specific influences, but about investing in the detail and really building a strong wardrobe.”

Houses including standouts Prada, Gucci and Dolce & Gabbana were among the many brands that turned to past eras for inspiration, in many cases to their heydays, their core categories and house signatures.

Spring’s overall sense of leisure and escapism continued into fall, evolving into a longing for the great outdoors, especially hiking and skiing. Outerwear was key and knitwear gained prominence with Fair Isles, chunky textures and knitted outerwear. Earthy colors ruled, with burgundy and green complementing camel and gray.

Here is what buyers had to say about the Milan collections and their strategies.


Sarah Rutson, fashion director, Lane Crawford, Hong Kong: “The key word has been heritage. What was important to me was making that modern and relevant, as opposed to archival. We’re seeing a great deal of sportswear and outerwear as opposed to suited tailoring. Suiting is on a downward spiral. Our business now is tailored separates and sportswear. Certainly what continues to be strong at retail for me, and I will keep growing, are Alexander McQueen, Neil Barrett and Burberry Prorsum. What has been really fantastic is the leather and accessories categories. Certainly for me the man bag has been extremely strong, and I’m really looking into growing that area. The runway shows seemed very flat and subdued. However, the showrooms and the incredible openness with the vendors has been really good. We’ve gone through the pain together and we’ve come out the other side. The communication we had a year ago has been heard, reacted upon and executed. Now we can be looking at keeping businesses level, and certainly with major partners we are growing the buys, which is very positive. We didn’t think we would be able to say that so early.”

Eric Jennings, vice president, men’s fashion director, Saks Fifth Avenue: “What I noticed most is a lot of designers went back to their roots, back to the things they do the best, like Burberry’s focus on the coats. Even Versace was rock ’n’ roll, aggressive, and in the showroom there were a lot of other elements, but it was true to Versace. Gucci, too. I think it will translate into great sales because people are looking for that right now. People want to see what they already love about collections enhanced and reinterpreted in a good way.”

Hirofumi Kurino, senior adviser and creative adviser, United Arrows Ltd., Japan: “For us the best shows were Prada, Bottega Veneta and Moncler Gamme Blue. In terms of trends, people are looking for the relaxed feeling, but also for a little adventure. Last season we saw the mountain influence; this season brands went even further with more of an explorer look, such as heavy shoes, heavy coats and a lot of detail. Sales are getting better in our stores; December and January were especially good. In a positive way, our customers need us to be more aggressive; we need to present new things. We slightly reduced our budgets for the bigger brands in order to be able put the focus on the young designer budget. Overall our budget is on par with last year, or slightly higher. The yen is also much stronger, which is a great advantage.”

Tom Kalendarian, executive vice president and general merchandise manager, men’s, Barneys New York: “Standouts were Prada, Gucci and Dolce & Gabbana. They offered very salable, handsome, easy-to-understand fashion that was obviously not futuristic, but for a time like this, it’s product that has the perception of great value. I really liked Moncler Gamme Bleu. Some collections that we’ll do well with that are more futuristic are Jil Sander, Neil Barrett and Alexander McQueen. It seems the market was split into two camps, either returning to the DNA or looking far into the future. My assumption would be that we’ll see even more futurism in Paris. When you step back and look at the total offering, I think there will be a nice balance of the classic luxury approach and a contemporary, modernistic approach. We have a lot of ammunition to do well at retail.”

Franck Nauerz, designer men’s buyer, Printemps: “Brands returned to their heritage, such as Burberry and Prada, and delivered a strong message for fall. Dolce & Gabbana also offered a solid lineup. Many labels played it safe, not taking very many risks. There was a plethora of very large coats, which coincides with the general outdoorsy theme, which extended from the English countryside all the way to Canada. There was an incredible amount of leather and suede, such as the shearling coats which echoed throughout the collections; meanwhile, army and equestrian themes were also strong. Color palettes were very warm and accentuated with wine reds, camel and off whites.”

Nickelson Wooster, men’s fashion director, Bergdorf Goodman and Neiman Marcus: “We particularly liked Prada, Gucci, Brunello Cucinelli, Etro, Tom Ford, Bottega Veneta and Michael Bastian. For showmanship and amazing product, too, we were wowed by Thom Browne for Moncler Gamme Bleu. In general we thought the mix of greens will look fresh to our customers, especially paired with gray, which we see a lot of, camel and navy. Velvet, double faced fabric, fabric/leather/cashmere mixes, are examples of the newness we are looking for. We continue to challenge our resources to find innovative ways to create lighter weights during the fall-winter season.”

David Walker-Smith, buying and merchandising director for men’s and beauty, Selfridges: “Dolce & Gabbana was a fantastic show, and in my mind, commercially, it was at its best. Trends were very hard to decipher this season, but the rounded shoulder at Prada and Jil Sander and more fluidity with the outerwear piece sent a strong message. Shearling coats were paramount, especially at Burberry. We’ve had a very good year with double-digit growth; we put our money where our customers are indicating what they want.”

Chirstophe Penne, vice president and merchandise manager at Al Rubaiyat Company for Industry & Trade Ltd., an operator of multibrand stores and free-standing designer boutiques in Saudi Arabia: “Collections were much, much more focused,” Penne said. He praised the Dolce & Gabbana, Gucci and Giorgio Armani shows. “In times of crisis, customers go back to brands they can relate to and are comfortable with and look for value items….Also, everyone has worked on pricing, which is much appreciated and welcome in this economy,” noted Penne, citing Dolce & Gabbana’s lowering of prices by 20 percent on some items. In addition, Penne was pleased with “smaller collections, in a reduced scale, but with a much better quality.” Trends such as “the preppy look, furs and tartan fabric will be key.”

Kevin Harter, vice president of fashion direction, men’s, Bloomingdale’s: “The good news is the mood of the season is upbeat, and the clothes are very commercial. I wish I would have seen more actual suits, but I was pleased there were a lot of great tailored separates and a lot of elements of formalwear, which always sells well. And the infusion of athletic pieces was good. I loved Ermenegildo Zegna. I loved Prorsum. Gucci seemed very modern and chic. I loved the velvet, and the eveningwear was so beautiful. The palette has been dark generally, so I was relieved to see the harvest color palette at Etro. I appreciated collections that tried to give us color.”

Lanita Layton, vice president and general merchandise manager for men’s and men’s footwear, Holt Renfrew, Canada: “The shows overall were really strong. As we saw at Pitti Uomo, there’s a real positive energy in the marketplace, and it showed on the runway too. Gucci was a definite favorite with our group. Elegant, sophisticated, with the best of the trends; the early Seventies feeling; the camel at the beginning, and then this lovely playboy feeling with the velvet blazers added the excitement that you want for evening. No question, when you look at the true tailored clothing brands, Ermenegildo Zegna and Canali were both strong, with beautiful fabrics, double-breasted suits done in a new way, not your father’s suit. Prada also with the camel entrance, beautiful gray flannel but of course with Miuccia’s touch, the terrific camouflage print. Dolce & Gabbana definitely had that whole Sicilian workwear feeling that they started with. To see that back in a sexy manner, with the movie giving it a certain romance, was a lot of fun. Outerwear was incredibly strong in every show and Burberry of course was some of the best of that.”

Jason Broderick, head of men’s wear buying, Harrods: “Dolce & Gabbana had a great show. We loved the Sicilian theme; it was very in tune with their identity. Emporio Armani was also very exciting. Burberry was a great favorite; Christopher Bailey delivered what a man wants in his wardrobe and simultaneously reinvented the mix. Moncler offered a spectacular performance with fantastic outerwear. Prada offered something very new, and Gucci was very much in tune with their heritage. Giorgio Armani is timeless, but this season he brought a great modernity to the mix. We remain very positive for fall 2010. Results in 2009 have been very good.”