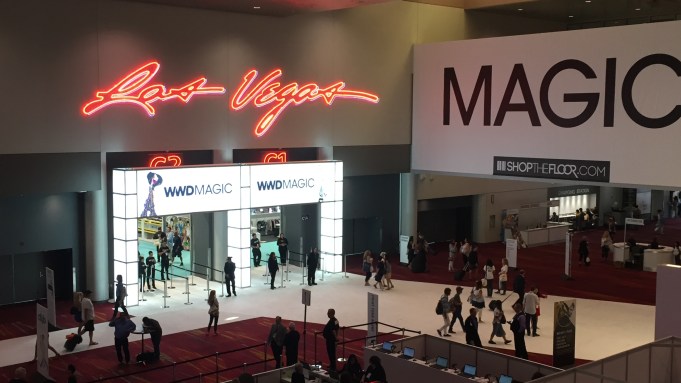 LAS VEGAS — Buyers shopping the Las Vegas shows continue to face myriad challenges. Amidst the backdrop of buy-now-wear-now, consumer confidence, social media, brand transformations and the potential impact of the looming presidential elections, a simpler shopping experience was top of mind for most.

“[Immediates are] the only way you could do business. Buying so far out seems like ice age-type of mentality because the trends are changing,” lamented Kitson and Kitross founder Fraser Ross.

And the move to digital isn’t just a conversation to be had at the consumer level; it’s a business-to-business reality, too, pointed out Stephanie Jenkins, founder of the online boutique Styled by Noir.

But Jenkins said she doesn’t mind the shift, pointing out it’s left buyers with the more serious brands that can now be covered in a shorter span of time, allowing for buyers to experience what trade shows are all about: “It is easy for us to look at line sheets online, but it is very different to touch and feel the fabrics and meet the personality behind it.”

WWDMAGIC veteran Alicia Estrada, owner of retro-style dress line Stop Staring, cut the size of her booth in half, but said, “I can’t complain. For the past four seasons, I’ve seen traffic down…because everyone’s gone digital, but I create my own traffic reaching out to my stores two months in advance to make appointments.’”

Some show organizers took a different tack. Agenda founder Aaron Levant filled his show space with several new noncommerce booths to raise awareness and offer buyers new experiences. “We want to change the concept of a trade show to connect with our consumers year-round — even those who can’t come here — and create value for our customers,” he said. “The value of an empty square of floor space will diminish over time.”

Every buyers’ bag and strategy was a little different in Vegas.

Accessories were big for many as easy pieces to sell to customers as gifts for themselves or someone else.

“I was excited to see a lot of jewelry brands are carrying on the choker trend through holiday and even spring, and they are getting more dainty and chainlike as opposed to the string chokers we were seeing for summer. I love this as I never really bought into the black leather choker and love a bit of dainty sparkle for the holiday and spring seasons,” said Jenkins, who also bought into the neckerchief trend from Donni Charm, noting the line’s popularity among celebrities that should create a nice lift for holiday and spring.

“If you walk down the street everyone’s looking at pictures [on their phones],” Ross said. “That [social media] hit means so much.”

Ross walked all of the shows, prodding vendors for the items that celebrities’ stylists pulled. The Blonde Salad’s fall deliveries sold out for him in two days, he said by way of example. His own business for Kitross, which launched in late May, has been robust with the retailer recently revising its guidance for the 12 months through August 2017 from $5 million to $7 million.

Adele Tetangco, cofounder and vice president of merchandise at the Farfetch-like platform for indie retailers and emerging designers Garmentory, devised a different strategy for shopping the shows. Tetangco concentrated on new or underground brands at Agenda, Capsule and Liberty as she gears up for Garmentory’s future expansion into men’s.

“What I’ve been doing this year is really searching for new designers that I think are going to be the next big thing,” she said. “Last year I was looking for existing names.”

“The newness that really stood out to me was just the novelty that was in more categories,” said Bloomingdale’s women’s fashion director Susan Marasco.

Marasco, who walked WWDMAGIC and Project Women’s, noted embroidery on bomber jackets and denim, along with varied shirting options in the way of exaggerated bell sleeves, cold shoulders and men’s-style shirting. Blush pink was there in a big way as were sun-washed reds, yellows and other muted washes, she said.

The embroidery, stripe, off-the-shoulder and ruffle movements also caught the attention of Brittany Nicholls, chief merchandising officer at e-tailer Lulus, which she said reported “a solid early fall” with the momentum expected to carry through holiday.

Katie Nichols, founder of Entourage Clothing & Gifts, stuck to items that could retail for $42 and under, shopping brands such as Tea & Cup at WWDMAGIC. Nichols was on the lookout for spring and holiday as the company is set to open its ninth store in September to be located in Auburn, Ala. “Sales are up across the board from last year — online and in store,” she said.

To motivate buyers to write orders, Henry & Belle offered two price tiers based on the date of the delivery. For instance, denim shorts with rolled cuffs were priced to retail at $84 if they were ordered for an immediate delivery, compared to $97 for a shipment on Jan. 1.

Grace Na, brand manager for L.A.-based junior denim resource Pistola, said buyers were still attracted to proven styles like the skinny and the boyfriend in a “soft” market. Successful trends included brighter blue washes, embroidered embellishment, softer fabrics like Tencel, cropped styles to show of shoes and destroyed details at the knees. “Nobody’s looking to be at the forefront right now,” she said.

Those who wanted the look for less visited booths such as Boom Boom Jeans at WWDMAGIC, whose items wholesale from $8 to $18. Buyers could pick up the embroidered or destroyed jean jacket look for $14, in sizes ranging from juniors to missy to plus. “When buyers play it safe, it’s nice to have a bit of fun with fringe or fraying, giving the classics a bit of a twist,” said creative director Denice Wright.

After all, “retail in general is just OK,” said Megan Williams, director of sales, merchandising and marketing at Henry & Belle.

Several women’s clothing brands — including Cupcakes and Cashmere, Line and Dot and J.O.A. — attempted to better their chances for sales by sponsoring booths at both WWDMAGIC and Project Womens. Kelly Helfman, the show director overseeing the two fairs, acknowledged the majority of women’s buyers shop both shows, but the holdouts who stick only to WWDMAGIC actually place big orders there.

That tactic helped Tracy Li, who left her marketing job at PayPal to prepare for the spring launch of her Cupertino, Calif.-based line called Two Feathers. On the first day of displaying her light, feminine separates, which retail for between $40 and $100, she made contact with 40 retailers at WWDMAGIC’s young contemporary section. Her goal is to land in boutiques in major metropolitans such as San Francisco, New York and Chicago. “My target is people like me,” the 26-year-old said.

Whether the outcome of the upcoming presidential elections impacts business remains to be seen.

“Historically, because of the uncertainty, people wait because they just don’t know — if it’s Democrat or Republican — how the laws will change,” said OffPrice ceo Stephen Krogulski. “So there is that uncertainty, but some people talk about how they had very strong springs. Summer was OK. Back-to-school was kind of hit and miss, too. So we’re hopeful that as the election draws near and then concludes that we get back to normal again.”

At Sourcing at MAGIC, American Stitch Design expected to benefit from both candidates’ stance toward supporting American jobs. “Everything is turning protectionist,” said Michael Westcott, sales manager for the Santa Ana, Calif.-based manufacturer, which produces swimsuits and activewear for designers based in Utah, Florida and Oklahoma. “It feels like it’s only going to get better for Made-in-the-USA stuff.”

Even with a bump in American production, Mexico’s Aztex Trading SA wasn’t concerned about losing business to factories north of the border. “There’s not that many apparel manufacturers in the country,” said Patricia Medina, a director of the denim maker, at Sourcing. Instead, she was watching how U.S. consumers responded to politics with their wallets. “We have a saying in Mexico: When the U.S. gets a cold, we get pneumonia,” she said. “If it creates any problem the consumers feel and they don’t want to buy, it’ll affect us.”

As retailers made bets on what consumers would buy, brands across the trade show floors were there to show off evolving lines.

Rails, known for its shirting, is expanding into new categories, such as silk, more denim, jersey and sweater knits. The goal is to ultimately build out a lifestyle brand.

“This is really a turning point for our collection for spring ’17,” said Rails founder and president Jeff Abrams. “It’s moving from an item-driven brand into fuller collections; as we’re going into more retailers — and we’re doing department stores and international retailers — we’re getting more space and so it’s a good place for us to showcase all the new things we’re doing.”

For Wildfox, it’s about continuing to chart a new course with a relatively new creative director and an aim to grow its customer base, keeping the younger crowds while hooking in the older audience.

“The whole market is changed as we all know,” said Wildfox ceo and cofounder Jimmy Sommers. “Everything’s online. It’s not like ‘Oh, we did $400,000 in orders.’ No one writes [orders] here really,” Sommers said before catching himself: “Well, everything’s digital. That’s why there’s no stacks, so there might be stacks.”

But the purpose of being there — perhaps is as it’s always been but maybe more acute with the shifts in retail — is all about marketing, Sommers said.

“We have our big accounts, but it’s more of a marketing [play]. It’s not cheap to show here. But, as I always say, if we weren’t here, all the s–t talkers would say ‘Oh, Wildfox is going under,’ so I’m here to put it in their face,” Sommers said only partially kidding.

Someone else who also materialized for Las Vegas to get in front of people, in perhaps a more subtle way, was American Apparel founder Dov Charney, whose new apparel company’s launch is imminent.

Charney confirmed his brand was not exhibiting in Las Vegas. When asked about his plans, he was coy as ever: “I’m just doing some subterranean business here. The intention is to be very public about [the new line] soon.”