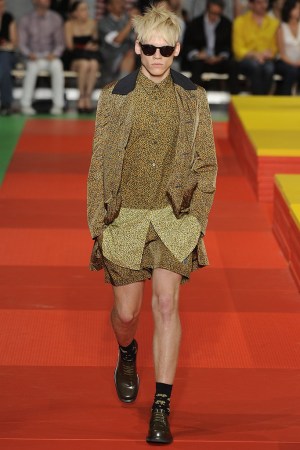 PARIS — Despite hair-pulling traffic conditions, retailers tipped their hats to Paris for maintaining a solid affirmation of the trends they saw gestating in Milan, with consistent brand messages from both contemporary and designer lines. Upbeat in their outlook, buyers’ budgets were either stable or up.

“There were some great collections [in] Paris [but] I think Milan actually had a resurgence this time, it was a lot stronger,” said Adam Kelly, buying for men’s designer, formalwear and accessories at Selfridges. “And with Jil Sander being back at the helm, that was fantastic. [Milan] almost softened the impact of Paris, so you were going from a great Milan season to a strong Paris season.”

In terms of trends, Kelly said: “There’s quite a modern aesthetic…a return to the past and to the classic, but it’s very much a future understanding.…Obviously prints and metallics are still popping up.”

Gabrielle Gomez, designer men’s wear buyer at Le Bon Marché, found there was a lot of diversity this season “and a lot of creativity, even in comparison to last year.” The store’s budgets are up as it prepares to unveil its revamped men’s department, with 25 percent more space. “Men’s fashion is on the move, and we are seeing a real renewal. We have been very pleasantly surprised by the shows this season and the level of attention designers have brought to their summer collections,” said Gomez.

Stephen Chan, men’s wear buyer for The Swank, Hong Kong and China, said that while budgets have not decreased, the store’s buying team is “trying to be more picky and reallocate budgets within the brands. We are looking for value-for-money, and not necessarily taking whole collections. In Hong Kong, sales have started slowing down since March, but Chinese consumers are boosting our sales.”

“It’s good, it’s very [appealing] to the Hedi fans.…I found the shoes and the sportswear were excellent, there’s some really great sports pieces in there. Sweatshirts and denim were really strong. For Saint Laurent it was a very different collection. It was a slimmer silhouette, much more rock ’n’ roll,” Selfridges’ Kelly said.

Modern tailoring, loose knits and light voluminous outerwear were among the key trends in the Paris collections, with footwear used to add character to silhouettes.

“Paris is always creative and stimulating. We will be buying more than ever. The season is very outerwear driven, and hooded lightweight parkas have never looked so good,” said Jeffrey Kalinsky, executive vice president of designer merchandising, Nordstrom.

“There is a consistent message in Paris about the modern sporty man,” said Eric Jennings, men’s fashion director at Saks Fifth Avenue. “Suits are worn with sneakers; jackets are tailored without sleeves; trousers are full of volume for comfort. Jackets still tend to be fitted but the trouser length is universally short. I’m also excited about all the novelty in footwear this season, which will give men of all shapes and sizes a way to experiment with self expression.”

“It’s a season of continuity — brands continue to affirm their identity, which is good from both a commercial and image standpoint,” said Tancrede de Lalun, merchandise manager for men’s and women’s wear at Printemps. The continuation of color in men’s will continue to drive sales for spring, he added.

“Even concept brands like Damir Doma added a red, blue and emerald palette,” commented Georgy Rostovshchikov, head of men’s fashion, Podium, Russia, who discovered some new brands, including Song for the Mute, Strateas Carlucci and Some/things. “The evolution of Japanese designers like Miharayasuhiro, The Viridi-Anne and Julius offered new [propositions] for concept lines,” he said.

“In terms of salable trends, the catwalks have been inundated with prints to an even greater extent than last spring’s shows — and it seems our clients are very willing to embrace mixed prints into their wardrobes,” said Stacey Smith, men’s wear buyer for Matches in London.

Optimistic in his outlook for the coming season, Stephen Ayres, head of fashion buying, Liberty, which “now does very little business in Milan,” said Paris has become a “really important market. I loved Dries Van Noten this season, the camouflage was totally unexpected, but I thought it was executed beautifully and looked anything but army surplus.…Ann Demeulemeester was also stunning, a really opulent color palette with great texture and proven silhouettes, with the signature romanticism of the designer,” he said.

For Dai Kamiyama, general manager of merchandising for men’s wear at Isetan’s Shinjuku store in Tokyo, the key words were luxury and comfort, “with jersey fabrics and loose fits.”

Casualwear brands such as Ami and Kenzo continued to hold sway, with the latter brand also garnering praise for its showmanship, involving an acrobatic performance by Parkour 91 yamakasi group.

“There’s a real sense that the brand has been reenergized by Humberto [Leon] and Carol [Lim],” Matches’ Smith said.